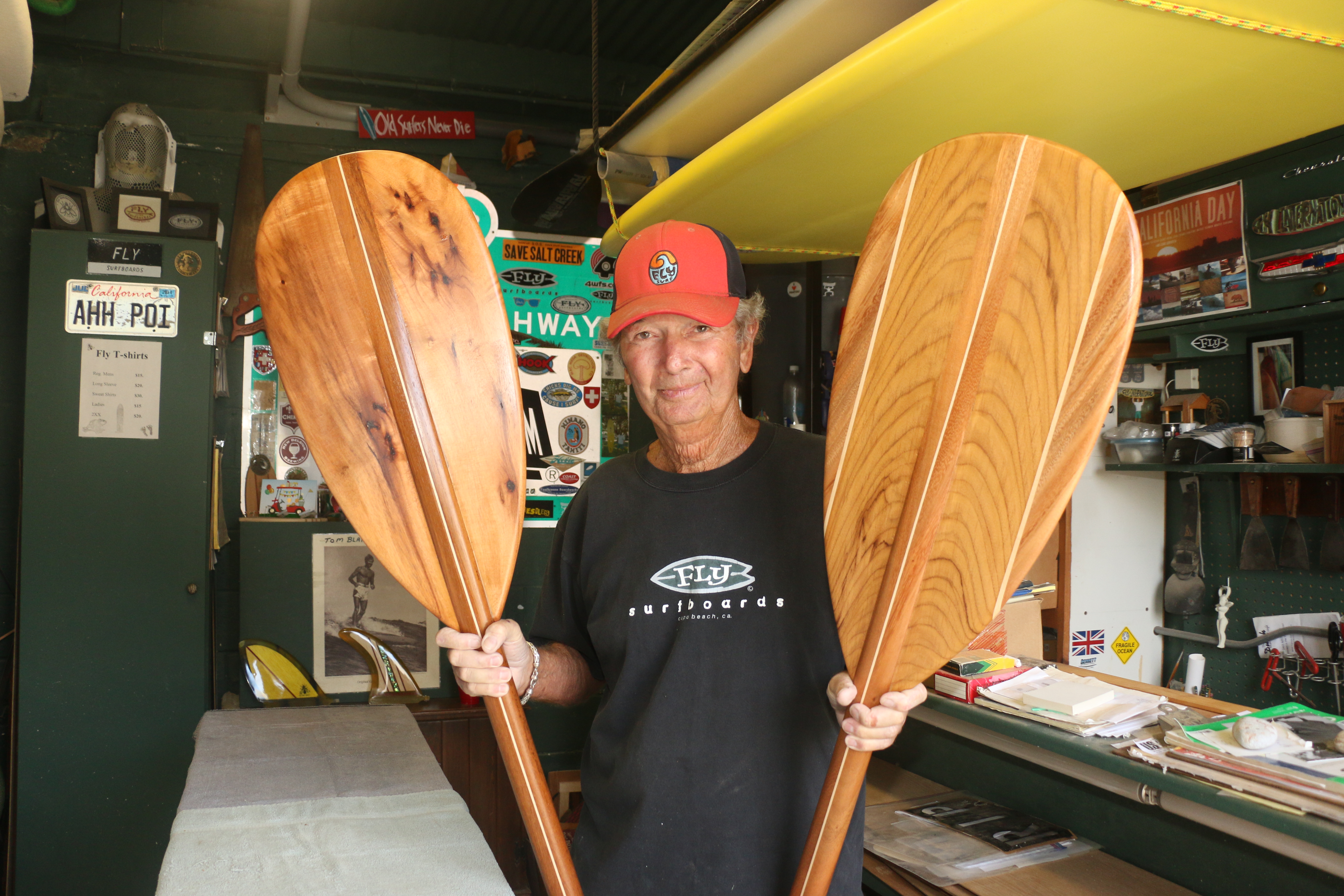 The Surf Bug: Surfboard Craftsman Worked With Legends of the Sport

Jean Pierre Van Swae has seen the surf industry blossom, from the era that brought The Endless Summer to today’s modern construct.

“The Fly,” as he’s known from his penchant to jump off cliffs and out of airplanes, is a walking encyclopedia of custom surfboard information, as well as construction of various seafaring devices. Every piece of the interview Van Swae gave on Tuesday at his Dana Point shop came full circle with some kind of piece of history of crafting surfboards.

Born in Belgium, Van Swae was raised in Southern California and eventually made his way to the area, where surfing was starting to take off and be recognized on a national level.

“It’s just a love of what I do; it’s not really work,” he said. “I try to improve on some things when I can. For example, when surfboards in the 1970s started changing and enabled you to ride waves that have an arch to them, we started giving the boards more structural strength.”

Van Swae worked for surfboard legend Hobart “Hobie” Alter and a few others south of San Clemente and in Hawaii, where he had his own repair shop. He also worked for Clark Foam, which delivered foam-core blanks for boards along the coast.

“He (Hobie) was the best boss to work for,” Van Swae said. “He just let you do what you wanted to do with shaping or sanding or glassing, and he just wanted you to do a good job, and if you had any way to improve the board, he was all for that.”

Since 1961, The Fly started working for Wardy Surf based out of Pasadena and Laguna Beach. But he said he’s always loved the beaches around San Clemente: Trestles, Cotton’s and the rest.

“Soon as I saw the ocean, it was just love at first sight,” Van Swae said. “When my folks moved down to Laguna Beach, I was in heaven. I saw a guy surfing, and that was something completely new to me. I immediately found out where the local surf shop was, and I got involved so much hanging around the surf shop that they put me to work.”

In those early years, Van Swae said they would pile into the van to go surfing all the time around the area.

As he worked on surfboards, he found different ways to try to make boards lighter, rather than shaping heavier glasses around the fins and implementing different balsa wood into the body of the boards.

“It was like a small step for mankind,” Van Swae said. “The surf industry has gone through a lot of changes—weights of boards, the types of fins and where they’re placed. They go from single to quad, sometimes guys have five fins. It enables you to do a variety of maneuvers.”

Soon after, they started experimenting with Plexiglas to make fins more durable and flexible.

“I’m always wondering how we can make the board more comfortable and trying new things,” he said. “If the board failed, then it failed. You just get back and try it again. People started putting more concave into the board and different shapes so they could ride well and generate more speed.”

For a while, Van Swae said he got into surf photography and working for Surfer Magazine, taking a break from the shaping and constructing part of the industry.

“I felt my love was in surfboards, and I realized that when I moved to Kauai for a few years,” he said.

For the most part, Van Swae said he’s constructed surfboards for people who are interested in getting out and trying the sport. He said he didn’t really make boards for “big stars” of surfing, but he got to know them.

“Being able to take your equipment out and try it out, it’s like a wonderful toy—but more than that; it’s something that shows if you’ve improved your work more than other people,” he said.

Today, there are machines that mass-produce surfboards to make the shape. The Fly said the machines are able to complete the whole package.

“It kind of eludes the shaper, in a way,” Van Swae said. “People like them because they’re cheap. But I still like to do it the old fashioned way. I still have the same planer I had in the ’60s to make the boards. A lot of people are thankful for keeping up the tradition.”

The Fly also experimented with other devices such as the ankle leash, going from surgical elastic bands and trying various materials to find the right fit. On Tuesday, he was working on new paddles for a stand-up paddle board or outrigger canoe.

The outrigger team Van Swae joined in Dana Point, he said, was one of the fastest, as they were able to customize their own paddles and make them lighter and were able to propel the boat “a wee bit faster” than the others.

Fly International Custom Surfboards is located in a small location off Domingo Avenue in Dana Point, but people can call 949.280.3982 or email flysurfboards@att.net to inquire custom surfboards.