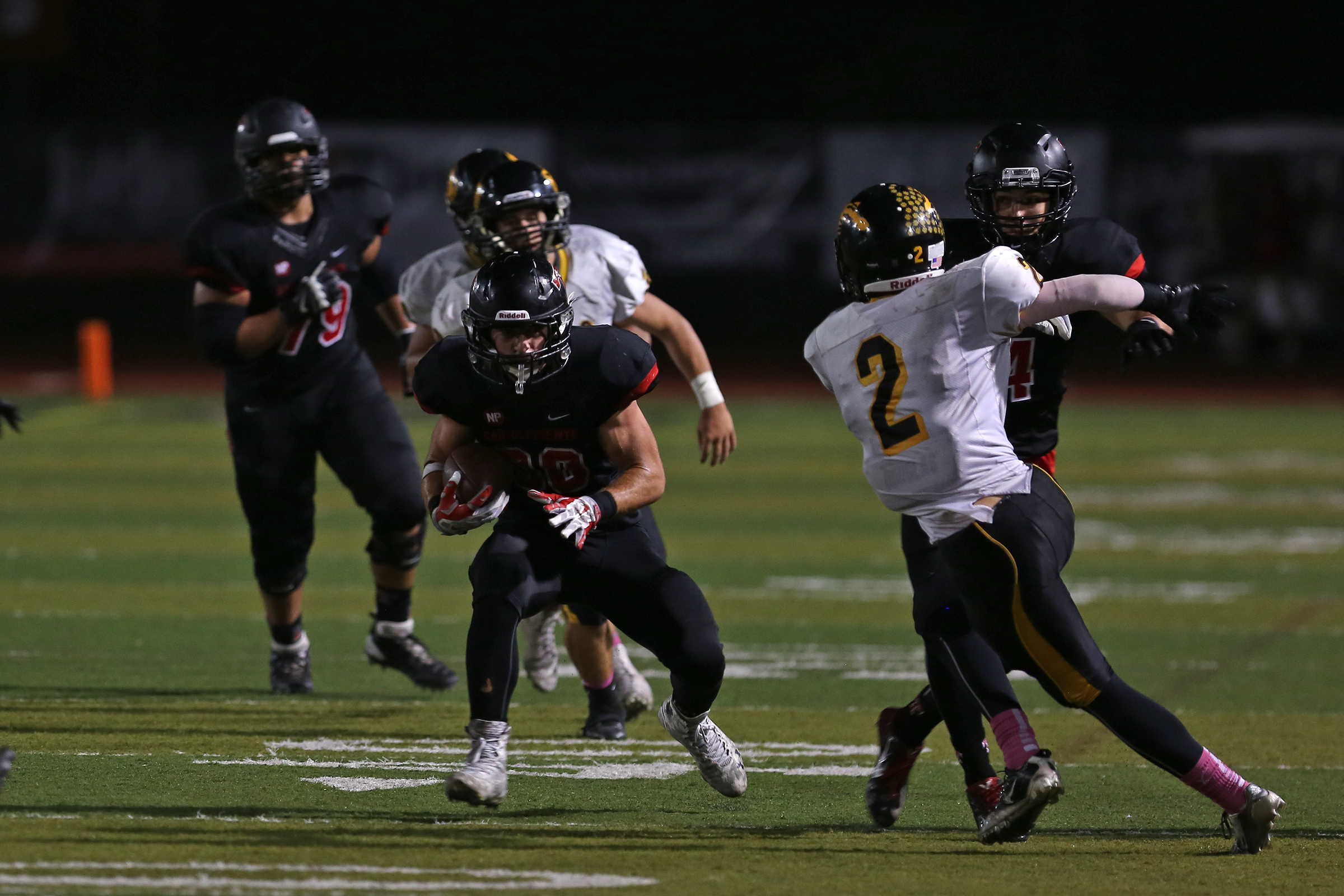 When looking at the San Clemente High School football team’s depth chart, the two featured running backs are Vlad Dzhabiyev and Brandon Reaves. But out on the field, the two are better known by their coaches and teammates as “thunder” and “lightning”.

Dzhabiyev, the power runner who grinds out yards after contact, has been dubbed thunder and Reaves, a speedy sophomore who is also adept as a receiver, is lightning.

When Capistrano Valley traveled to San Clemente to open up Sea View League play on Oct. 10, the Cougars got a healthy dose of both, as the two running backs accounted for six touchdowns in a convincing 54-27 victory.

Dzhabiyev had a game-high 142 yards rushing with three touchdowns and a touchdown reception. Reaves ran for 91 yards and two touchdowns to round out a spectacular performance for the Tritons (6-1 ,1-0 league) backfield. Quarterback Sam Darnold completed 14 of 23 passes for 183 yards, one touchdown and an interception.

Although none of his scoring runs on the night were long footraces, Dzhabiyev broke off chunks of yardage at a time and routinely shed tackles. San Clemente head coach Jaime Ortiz accredited Dzhabiyev’s ability to stay on his feet to his work ethic over the offseason, when he grew stronger by putting in the hours in the weight room and gained over 20 pounds.

Dzhabiyev opened up the scoring on a seven yard touchdown run midway through the first quarter. Less than two minutes later, Darnold hit senior receiver Jake Russell for a 62-yard pass that set up a six-yard Reaves touchdown run. The two running backs finding the end zone would be a common theme of the night from then on.

“We nicknamed them thunder and lightning and they are. We take pride in running the ball and both Vlad and Brandon are two guys that are effective doing that,” Ortiz said.

Dzhabiyev scored on a one-yard run and freshman kicker Chase Berman made a 35-yard field goal to give San Clemente a comfortable 33-6 lead at halftime. The Cougars would not threaten the rest of the night.

For the second consecutive game, Tritons senior linebacker Riley Whimpey made an impact scoring play. With less than 10 minutes to go in the game, he intercepted Cougars quarterback Gavin Pruett and returned it 82 yards for a touchdown to make it 54-20.

Both Reaves and Dzhabiyev scored once in the second half to send the Tritons into their bye week on high note.

“It’s fun. They call us thunder and lightning. He’s thunder, I’m lightning and it showed today,” Reaves said. “It feels great to get another win and start the league off 1-0.”