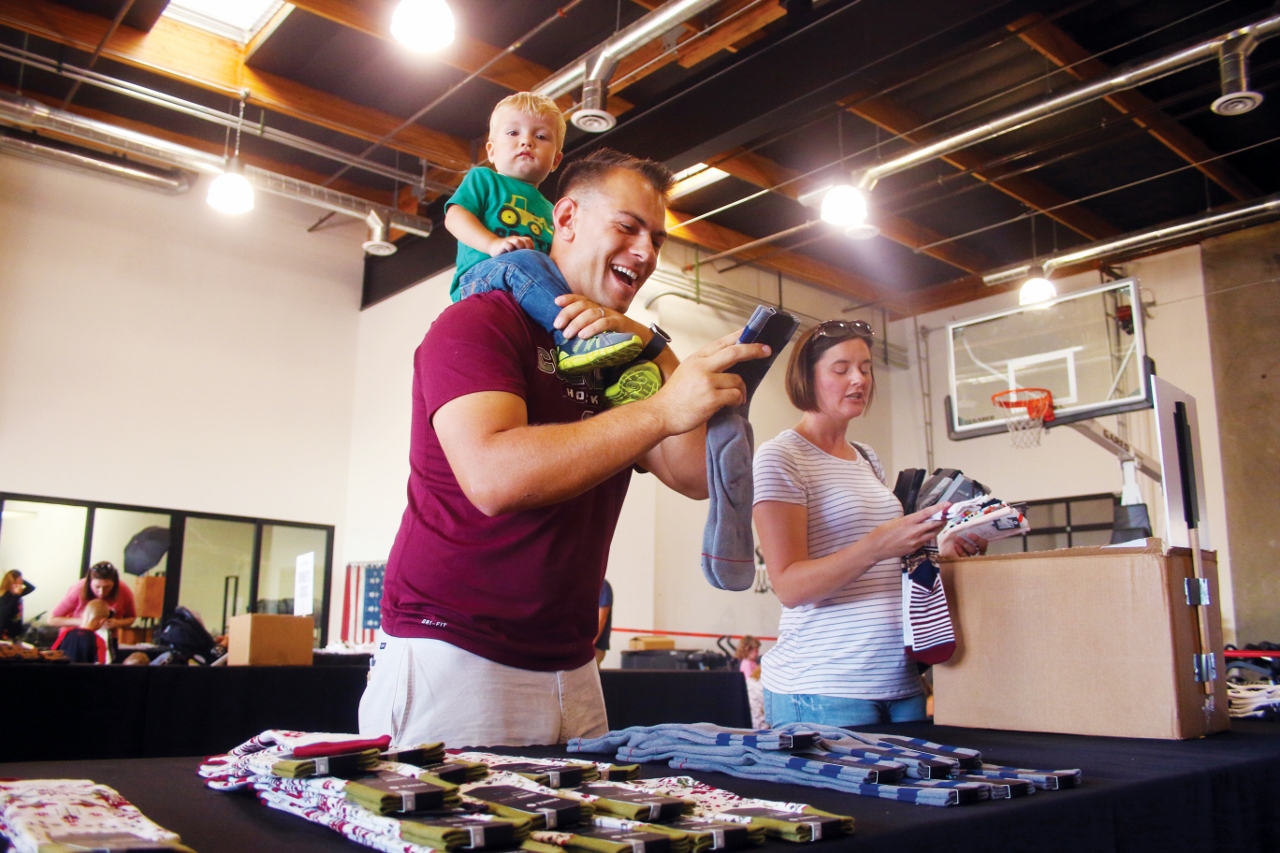 San Clemente High School and Tesoro High School football teams compete each year to see who can raise the most for the Socks for Heroes program. The winner for this year will be announced at the two high schools’ game on Friday, Oct. 13, at Thalassa Stadium in San Clemente, located at 700 Avenida Pico. For more information, visit www.tritonfootball.com or drop off brown crew socks at the SCHS admissions office or at the ticket booth at the game. For more information about the San Clemente Marine Corps Support Group, visit www.scmcsg.org.

If military members find themselves in a high-stress situation while lugging heavy equipment into unfamiliar territory with potential threats, the last thing they should be thinking about is their sock supply. That’s where San Clemente Marine Corps Support Group comes in.

A program called Socks for Heroes, which is managed by the nonprofit organization San Clemente Marine Corps Support Group, donates thousands of pairs of socks to Marine and Army units deployed in adverse areas, such as Iraq or Afghanistan.

As a way to continue providing the essential socks to armed forces, the group hosts an annual event at Stance Socks, a socks manufacturer, at the company’s headquarters in San Clemente. The event sells socks at markdown prices and the proceeds are given to the nonprofit. Stance socks are typically priced at $15 to $30. At the event, military families are able to pick up a pair each for free, and then additional pairs can be purchased for $4 to support the group.

“We’ve been fortunate because we’ve enjoyed a lot of support in the community as well as support nationwide,” Jim Hogan said, treasurer of the San Clemente Marine Corps Support Group. “(The event) is a winner on many levels because it provides the Marines and their families an opportunity to get out and enjoy themselves. They can feel appreciated by the local community and meet people who they may not normally have an opportunity to (meet).”

San Clemente Marine Corps Support Group president Carla Hogan, said socks are one of the most important articles of clothing for troops, who may not be near sanitary cleaning areas for weeks at a time.

“We look forward to one day stopping shipment of our socks overseas, but until there are no more wars and nothing to put Americans overseas in harm’s way, we’ll keep doing it.” –Jim Hogan, treasurer of the San Clemente Marine Corps Support Group

“They’re far from places with laundry facilities, which is one of the reasons why they need socks,” Jim said. “The Marine Corps doesn’t buy them and the Army doesn’t buy them; they have to buy them for themselves or get them from their families.”

The socks the program sends to the Marines are low-cost and disposable. The troops are able to wear them three times and then discard them. Most of the socks are sent to units in combat areas.

“The way the cycle works is we purchase containers (of socks) and then ship them to different areas, which takes 60 days to manufacture the socks and another 10 days to get to the Marines,” Jim said.

First Lt. Chris From of the 1st Marine Division examines a pair of socks during the Socks for Heroes event at Stance Socks on Oct. 6. Photo: Eric Heinz

Sgt. Christopher Mate listens to music with his family during the third annual Socks for Heroes event at Stance Socks on Oct. 6. Photo: Eric Heinz

The program and its beneficiaries are particularly important to the Hogans, as their son, Marine Lance Cpl. Donald Hogan, died during a tour in Afghanistan in 2009.

For the last three years, the Hogans have partnered with Stance, a company that has had meteoric success by licensing with major sports affiliations, including an NBA all-star game.

“They’ve done this event for us to make sure that we have adequate resources to provide the troops socks, and also to provide for the families here,” Jim said. “It started in 2011, when we shipped about 500,000 pairs—or about 43 tons. We ship about 10,000 pairs a month now.”

Why socks are so important

Jim said a Marine officer once told them the three most important items to have while deployed are ammunition, food and socks. Putting boots on the ground for long periods of time comes with its wear and tear, as well as possible foot diseases.

“If you’re an infantry Marine, you’re on your feet 12 hours at a time every day,” Carla said. “The terrain can be very difficult: it could be wet, it could be rocky, it could be muddy, it could be the dry desert. Their feet are an import part of their job, and they go through socks rapidly. Often, if they’re out in the field, they don’t take their boots off. They have to be prepared if there’s an incident. Most of them sleep in their boots.”

Not only is deployment difficult on the military personnel, but also on their families and friends.
“It’s not just about those who are going forward, it’s about the families who are left behind,” Jim said.

“A lot of people don’t realize the stresses the families with deployed Marines are under,” Carla added, “especially a wife who’s living in California for the first time who has two or three kids, sometimes more. Their communications are not that great when their husband is deployed. They’re constantly under stress when their loved one is far away. Plus, they’re trying to run the whole family by themselves.”

From families to soldiers

Marine Sgt. Christopher Mante of the 2nd Battalion, 4th Marines, said at the event that socks are definitely an important part of what deployed Marines need.

“Honestly, getting anything when you’re overseas when you’re deployed is a great feeling,” Mante said.

Letters of appreciation from children were his favorite thing to receive.

Rachel Tice, whose husband is in the Marines, had her two children in tote while she perused the scores of socks.

“We came to the event scratching our heads, thinking what kind of sock party it would be, and we realized what an amazing event (Socks for Heroes) really is,” Tice said. “This is our third year coming, and once we bought the socks, we were hooked. So now we look forward to the socks and the party.”

Tice said friends from around the state all gathered to meet her at the event. Her husband is currently deployed in Iraq.

“We have a recreation program through the city, so we give grants to families so mom can take the kids to swim lessons and have an hour break during the day,” Carla said. “We also have programs to help keep them busy too. Marines are typically deployed for 10 months or more at a time. They’re wonderful people, and I think the tie to the community is important to them. I want them to feel comfortable in our town. I want them to know that people really … want to support the military and that they care about their well-being, and I think we’ve accomplished that.”

A seemingly reasonable end to the program, Jim said there’s only one major future milestone he wishes to cross.

“We look forward to one day stopping shipment of our socks overseas, but until there are no more wars and nothing to put Americans overseas in harm’s way, we’ll keep doing it,” Jim said.