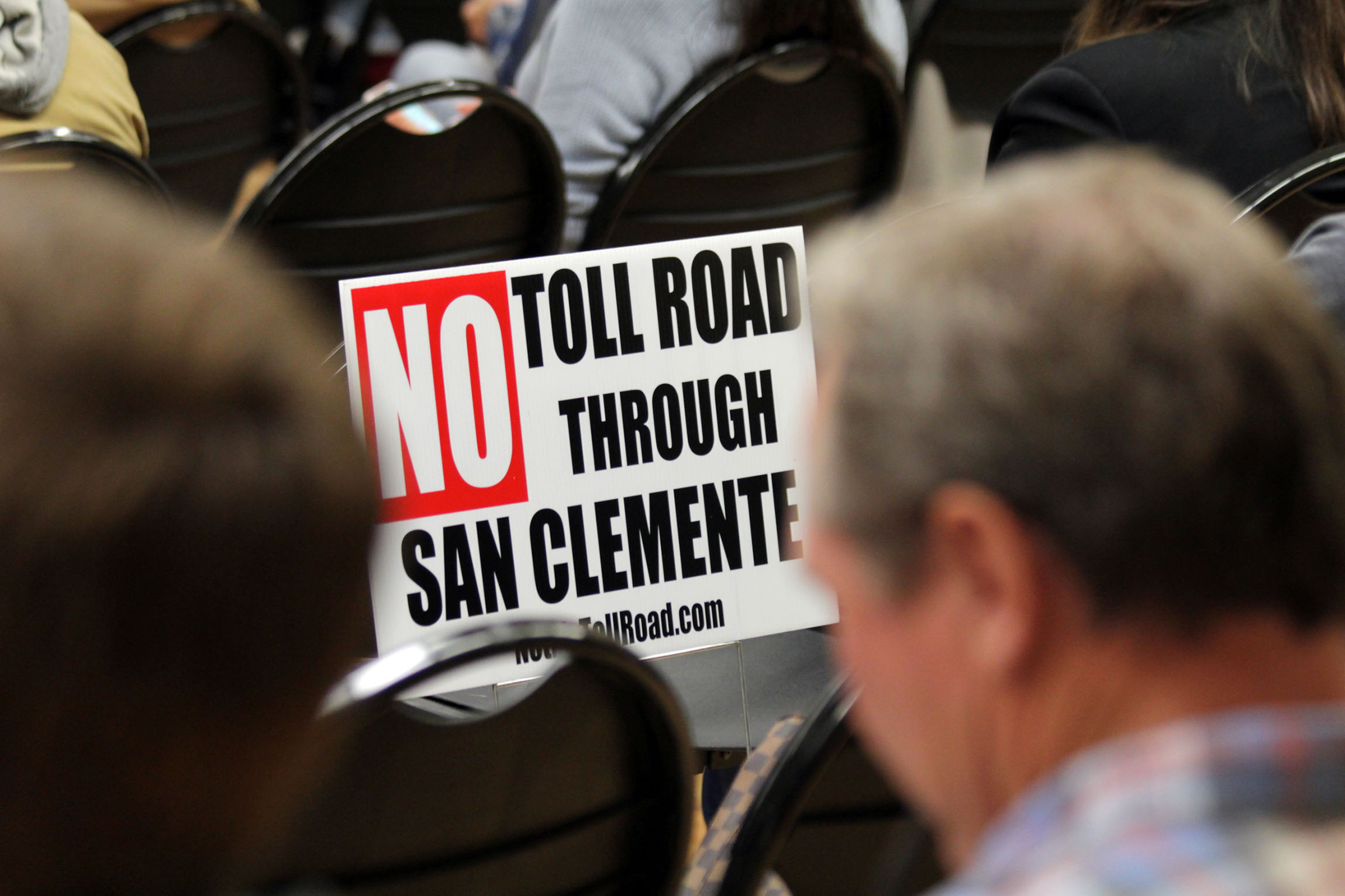 A toll road through San Clemente apparently will not be pursued.

Officials with the Transportation Corridor Agencies confirmed that out of all of the proposals for South County traffic relief, Alternative 22—an arterial, un-tolled road—would be the sole alternative that staff will recommend the board of directors to adopt.

The South County Traffic Relief Effort, which included a series of proposed routes—some of which intended to extend the 241 Toll Road through San Clemente and connect to Interstate 5, while another would have extended Crown Valley Parkway to the 241—were assembled to “improve north-south regional mobility in South Orange County and accommodate regional travel demand,” according to the California Department of Transportation.

On Tuesday morning, March 3—California’s Primary Election Day—Assemblymember Bill Brough posted this announcement on his political Facebook page: “It looks like a Toll Road through San Clemente is dead.”

“An email sent to my office states that TCA will vote to advance option 22, the Los Patrones extension, as an un-tolled highway, and that ‘no other alternatives would be further studied,’ ” Brough wrote.

TCA officials confirmed Alternative 22 would be exclusively recommended to the San Joaquin Hills (SJHTCA) and Foothill/Eastern Transportation Corridor Agency (F/ETCA) Board of Directors.

Alternative 22, a road alignment plan that Orange County Board Supervisor and Chairperson Lisa Bartlett has previously sponsored, would connect the new Los Patrones Parkway from Cow Camp Road in Rancho Mission Viejo to Avenida La Pata, running along the east side of the Prima Deschecha Landfill. It would remain an un-tolled road.

The initial stages of the environmental process to study the proposed 241 Toll Road extensions through San Clemente and parts of San Juan Capistrano began in November, when Caltrans began to accept public comment and review of the SCTRE. The public-comment period closed on Feb. 10 after being open for 94 days.

“Caltrans received 1,650 comments,” said Sarah King, media relations manager for TCA. “In the scoping document, 10 alternatives were proposed. Once the document was closed for public comment, the 10 alternatives (one of which had four variations) go through a screening criteria.”

According to King, a traffic analysis was conducted on the alternatives and the public comments were all reviewed and analyzed.

“After the review process, Alternative 22 (un-tolled) was identified as the alternative that would move forward for further consideration,” King said.

Dana Point City Councilmember Joe Muller is a director for the OCTA and the F/ETCA, as well as an alternate director on SJHTCA. He said he’s spent the last year-and-a-half working to enhance communication between TCA and OCTA.

“My main goal when I was elected to OCTA was to get TCA and OCTA working together,” Muller said. “Un-tolled Alternative 22, the Ortega Highway Widening project and HOV widening from Pico to the county line are great examples of what can be accomplished when leaders lead.”

These three projects should meet traffic relief needs for the next 50 years, Muller added.

The proposal could potentially impact the cities of San Clemente and San Juan Capistrano.

In a prepared response, the city of San Clemente said it was pleased to learn of the TCA’s recommendation.

“The City is encouraged that (the TCA) will be recommending to their board consideration of an extension to Los Patrones Parkway as a non-tolled County arterial only for further environmental review,” the city of San Clemente said.

San Juan Mayor Troy Bourne issued a statement, saying the city of San Juan Capistrano was very pleased to learn that the TCA will only be advancing the non-tolled Los Patrones extension alignment for continued study.

“My colleagues on the city council and I committed to our constituents that we would stridently oppose any alignments that would negatively impact San Juan Capistrano,” Bourne said in an email. “To that end, we have been working with TCA to focus on a viable alternative to enhance the region’s mobility needs, and we are confident that the proposed arterial highway concept will achieve that purpose.”

Bourne said he fully supports Caltrans’ efforts to construct the “Lower Ortega Highway Widening Project,” and he is eager to continue discussions with Caltrans, TCA, OCTA and the County to identify funding and advance that long-overdue public safety and traffic relief project.”

According to a statement from Supervisor Bartlett’s office, Bartlett is committed to ensuring all three of these agencies work cooperatively with the County of Orange and cities within the project areas.

“After years of careful planning and listening to the public, together with our partner transportation agencies, we have developed a balanced transportation improvement plan,” Bartlett’s statement said.

Irvine Mayor Christina Shea says she’s sensitive to how a route through San Clemente could have impacted residents and the community’s way of life. She serves as the chair for the F/ETCA Board.

“We are not going with Alternative 14, which would hugely have impacted open space and quality of life in San Clemente,” Shea said. “Our processes work. We needed to get through the process and I stand by that. I’m very pleased we’ve come to a position of peace and a point of success.”

The recommendations will be considered by the TCA Boards on March 12 at 9:30 a.m.

Collin Breaux contributed to this story