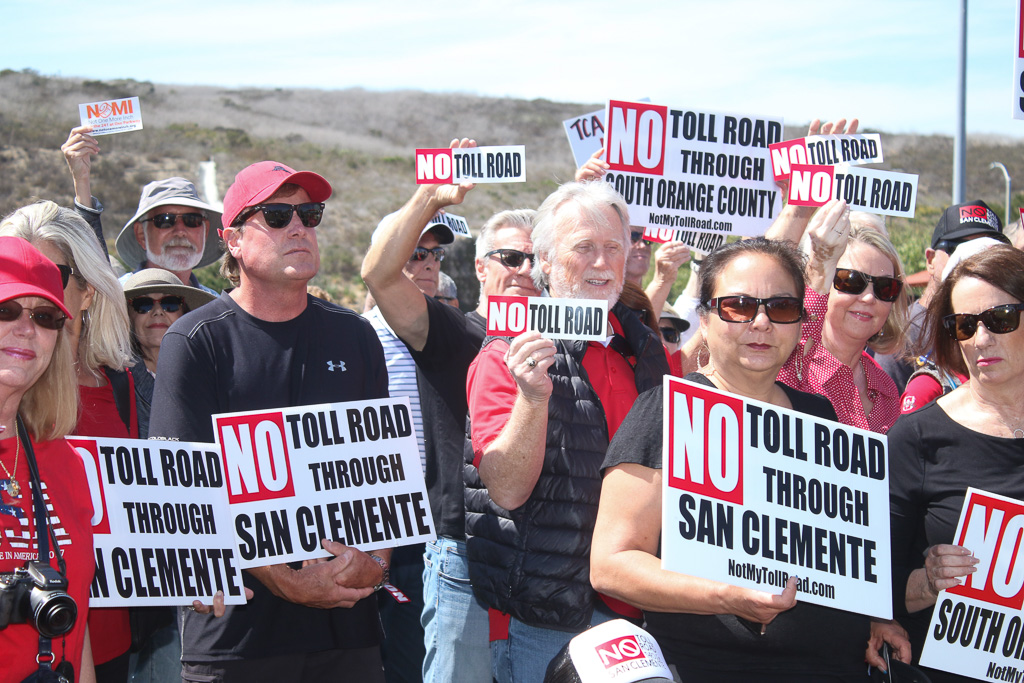 The question of what to do with The Toll Roads reached an inescapable intersection among Orange County Transportation Authority (OCTA) board members on May 25: whether to support an Assembly bill that would disarm the Transportation Corridor Agencies (TCA) or not.

AB 382 has been supported by many people in San Clemente. On June 3, people associated with the grassroots organization “Not My Toll Road” hosted a petition signature gathering at the Farmers Market on Avenida Del Mar.
A resolution was put on the OCTA May 25 agenda meeting asking the board to support the bill or not.

Mike Kraman, the CEO of the TCA, said his organization has considered a range of alternatives as required by the California Natural Resources Agency and National Environmental Policy Act regarding proposed toll roads through San Clemente, some of which would go directly through neighborhoods in San Clemente, and is willing to work with OCTA through every step of the process. He referenced the forums and outreach programs that began in 2015.

“I know OCTA feels this process is taking too long and that many of the ideas could or should have been dismissed much earlier,” Kraman said during the May 25 meeting. “We at TCA welcome the opportunity to build on the success the county has enjoyed by strengthening our relationship with OCTA.”

Kraman added that he understood this can be easier said than done.

“But I believe (we) have the desire and the talent working with our governing boards to make this happen,” he said.

Dan Bane, a San Clemente-based environmental attorney, said the state code that governs the TCA currently prohibits the toll roads from being constructed in a number of places.

“They can’t build anywhere to the east and south of San Clemente. That’s important because it now fancies itself as a regional transportation agency,” Bane said.

Bane said OCTA, as the regional authority, should be leading the effort to solve traffic mobility problems in South County.
“This bill makes it clear that it’s OCTA responsibility,” Bane said.

San Clemente resident Mark McGuire asked the board to support the bill, adding that the TCA has “veered out of its lane,” as it was tasked with constructing 60 miles of roads and has since embellished its intent.

Orange County Supervisor Shawn Nelson, who sits on the OCTA board, was irritated by the historical ramifications of the TCA, citing the 20 years its been working on traffic alleviation by way of proposing toll roads that never get built.

San Clemente City Council member Lori Donchak reiterated that the scoping meetings the TCA hosted between 2015 and 2017 did not reflect the best interest of the people of San Clemente.

Supervisor Lisa Bartlett, current chair of the OCTA, has defended the TCA’s decisions since the new toll road proposals began. Bartlett represents San Clemente’s district, but at least two of her fellow supervisors have—at least in part—opposed some of the ideas of the TCA. Supervisor Todd Spitzer recently opposed Idea 14 (the one that goes right through the city), and Nelson said he would vote in favor of supporting the bill.
The OCTA board did not render a vote in support of the Assembly bill.

AB 382 is currently in the Senate Transportation and Housing Committee, as it already passed the Assembly in 2017 under different amendments. California Legislature committee hearings in the Senate were scheduled to resume on June 4, but the bill has not yet been heard by the committee.