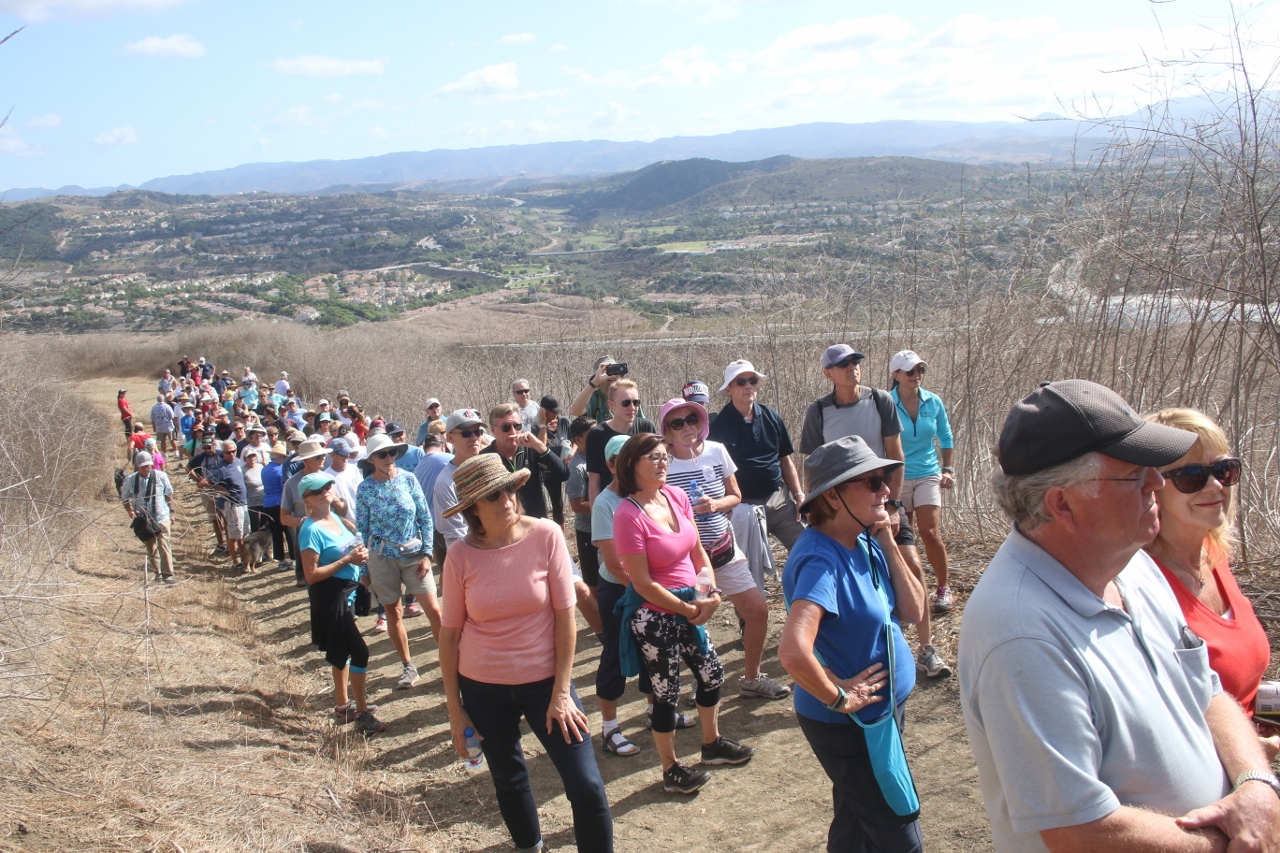 Toll Road Hike Examines City’s Nature that Could Be Threatened

About 200 people attended the city of San Clemente’s toll road hike on Sept. 23 on the trails near Camino Del Rio and Avenida La Pata. The hike was intended to show people where potential toll roads could be built. Photo: Eric Heinz

City Council member Lori Donchak speaks to a group of about 200 people who made the hike on Sept. 23 on the trails where proposed toll roads could be built. Eric Heinz

About 200 people made the two-mile trek along the trails near Avenida La Pata and Camino Del Rio on Sept. 23. The hike was intended to show people where possible toll roads, proposed by the Transportation Corridor Agencies (TCA), could be constructed and what flora and fauna exist in those areas.
The hike was led by City Council Member Lori Donchak and Joel Robinson, the founder of the environmental organization Naturalist for You. City engineer Tom Bonigut spoke about where the toll road proposals were slated.

“It’s all approximate, but we’ll give you an idea,” Bonigut told attendees and added that some of the environmental survey markers have already been established for study areas for the toll roads.

The hike took a look at proposals 13, 14 and 17. The 13th and 17th alignment would go through areas of Shorecliffs and meet somewhere in between, with both alignments feeding into Interstate 5. The 14th alignment is drawn to go through the center of San Clemente from the northeast, through the Prima Deshecha Landfill, through various subdivisions and end up at I-5 near Avenida Pico.

As a joint powers authority, the TCA does have the ability to condemn areas and file for eminent domain, or the taking of property for public use.

The City Council voted at its Sept. 19 meeting to approve the initiation process of making a park in an open space area at the corner of Camino Vera Cruz and Avenida Vista Hermosa. The park is located in an area of the toll road proposal.

This, Donchak said, could deter the TCA from constructing a toll road through the east end of the city.
“As part of the (Beaches, Parks and Recreation) Master Plan…it’s been used as staging area,” Donchak said. “Our desire is to upgrade the quality of that open space so that it’s more accessible to the community. And it elevates the value of the open space to the community.”

Donchak said that Measure V was brought to the voters in an effort to keep the toll road out of the city, and they are now seeing what power that ballot initiative gives the city and what the power the state has to initiate eminent domain. She said the city has also been in contact with Congressman Darrell Issa, the County Board of Supervisors and state representatives regarding these issues.

According to a staff report on the initiation, the park designation does not have to go to a ballot vote because it would promote recreational activities under Measure V.

Mayor Kathy Ward said at a recent Council meeting that one of the proposed alignments appears to be closer to the high school, located at 700 Avenida Pico, and the I-5 freeway in order to complete the 241 extension.

During that same meeting, the City Council voted to appoint Steve Swartz to the TCA board on the San Joaquin Hills board. Ward already sits on the Foothills/Eastern Transportation Authority board.

The next TCA Joint Board meeting will take place at 9:30 a.m. on Thursday, Oct. 12, at the TCA headquarters, located at 125 Pacifica in Irvine.