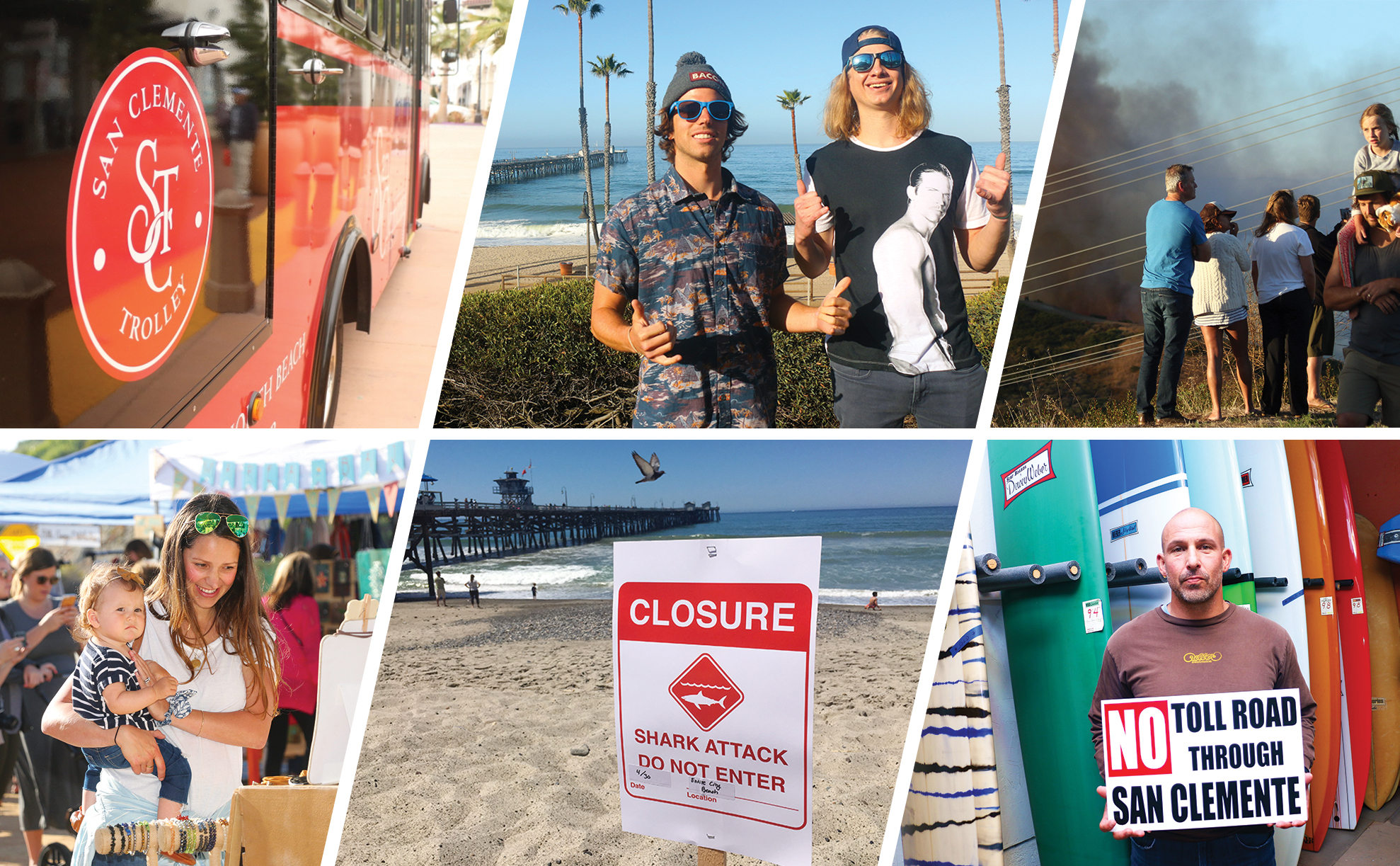 The Toll Road, Sharks, Krikorian, Hurley Pro: Take a Look Back at the Biggest Headlines of 2017

There may not have been a consistent theme to 2017 (toll roads). It was a diverse and eclectic year for San Clemente (toll roads). Many milestones were reached (toll roads) and various projects came to fruition.

But it also was not an easy year (toll roads) for San Clementeans, as lasting issues continue to cause controversy. Though there’s still evident divisiveness, the city continues to support one another under the #onetownoneteam mentality.

The San Clemente City Council decided to do away with its ethics policy of 10 years and allow the Orange County District Attorney and other state agencies handle ethics complaints against the city and its elected representatives. The move came after several ethics violations were filed, which city officials said hadn’t been done in years.

Hundreds of people joined San Clemente’s version of the Women’s March on Washington on Avenida Del Mar at the city’s library. Some traveled to participate in the demonstration in Santa Ana and met at the Outlets to be chartered by bus.

Longtime owners of Casa Tropicana hotel, Rick and Susan Anderson, decided to sell the location to a new owner.

A judge ordered an injunction against the city of San Clemente after it was unable to comply with a decision that it needed to update its housing element to allow for more locations of an emergency or homeless shelter. The injunction spanned most of 2017 and prohibited issuing building permits in certain areas until the city came into compliance with Senate Bill 2, which requires cities to allocate adequate locations for such emergency or homeless shelters.

Chad and Bodhi graced the San Clemente City Council with their proposal to erect a large, 12-foot statue of Paul Walker at the end of the Pier. The City Council was unable to honor their request, but an 18-inch miniature statue of Walker now resides at City Hall. Videos from the meeting posted to the SC Times Facebook page reached more than 1 million people and caught national media attention.

The International Chamber of Commerce awarded San Onofre Nuclear Generating Station (SONGS) operators Southern California Edison $125 million in its lawsuit against Mitsubishi in its claim that steam generators purchased by Edison were faulty and caused the plant to close. Edison initially sought $7.6 billion in the lawsuit.

Local band Tunnel Vision performed a live concert at the highest altitude on top of Mt. Kilimanjaro to raise awareness of elephant poaching.
The SC Times visited The Ranch near Lake Elsinore, a location where many homeless and drug users are sent to detox and kick their addictions.
The first Market at North Beach opened for business on Wednesdays during the summer.

Renewed invigoration sprouted throughout the city, as No Toll Road Through San Clemente signs were dispersed on many lawns and business windows. The Coalition to Save San Clemente began its campaign against the Transportation Corridor Agencies (TCA) proposals for a toll road through the city.

After an attack on a woman at San Onofre State Beach, great white sharks started populating the coastal water from the southern beaches to Doheny State Beach. The sharks caused more beach closures than some lifeguards had seen in 15 years.

FBI agents raided the behavioral health treatment provider Sovereign Health for reasons not yet disclosed by authorities. The FBI also raided Vedanta Laboratories and the home of Tonmoy Sharma, CEO of Sovereign Health. Sharma later said in a statement that the FBI had unfairly accused the business. Sovereign filed a lawsuit in August that blamed an insurance provider for the FBI raid.

A human skull was found along the trails of eastern San Clemente. The human of the skull has not yet been identified.

A wildland fire burned 760 acres on Camp Pendleton and southern San Clemente, which firefighters were able to stop before it threatened many structures. The San Clemente/Dana Point Animal Shelter prepared to evacuate if needed. The fire was 95 percent contained by July 1.

The second distillery in Orange County since prohibition, Drift Distillery, opened in San Clemente.
Southern California Edison and Citizens’ Oversight Projects settled a lawsuit regarding the storages of spent nuclear fuel at SONGS that requires the power plant operators to develop a stronger management plan and actively seek other locations to store the fuel.

After a successful summer, the San Clemente Trolley program was extended through Oct. 1. The trolley needed 10 riders per hour to receive funding for next year’s program, but ended up with an average ridership of 45 per hour—a total of 90,000 riders from Memorial Day to Labor Day weekends.

Hundreds attend the Not My Toll Road concert at the Reserve Clubhouse and Park, including then-Mayor Kathy Ward and community members.

Pier Pride celebrated its second Light up the Pier event and raised more than $250,000 for maintenance and rehabilitation of the iconic structure.
The parking lot of St. Andrew’s by-the-Sea appeared to show signs of land sliding away from the church’s main structure. Reports by Caltrans and other geotechnical firms are expected to be published on the site in the near future.

Lifetime Fitness plans to increase the size of its San Clemente clubhouse to 40,000-square-feet as well as renovate facilities were approved by the Planning Commission. The business is expected to open in late 2018.

World Surf League announced that the Hurley Pro and Swatch Pro held annually at Lower Trestles would not be a part of the 2018 Championship Tour.
The city of San Clemente initiated a study of rising sea levels in the immediate area, and the results will be added to its Coastal Land Use Plan.

Tim Brown was selected as the next mayor of San Clemente.

San Clemente local Rian Johnson, the writer-director of Star Wars: The Last Jedi, who spoke with the SC Times in November, saw his latest creation garner a booming $220 million in box-office ticket sales in its first weekend.

Editor’s note: Links to the stories of the subjects in bold can be found in this article online at www.sanclementetimes.com.