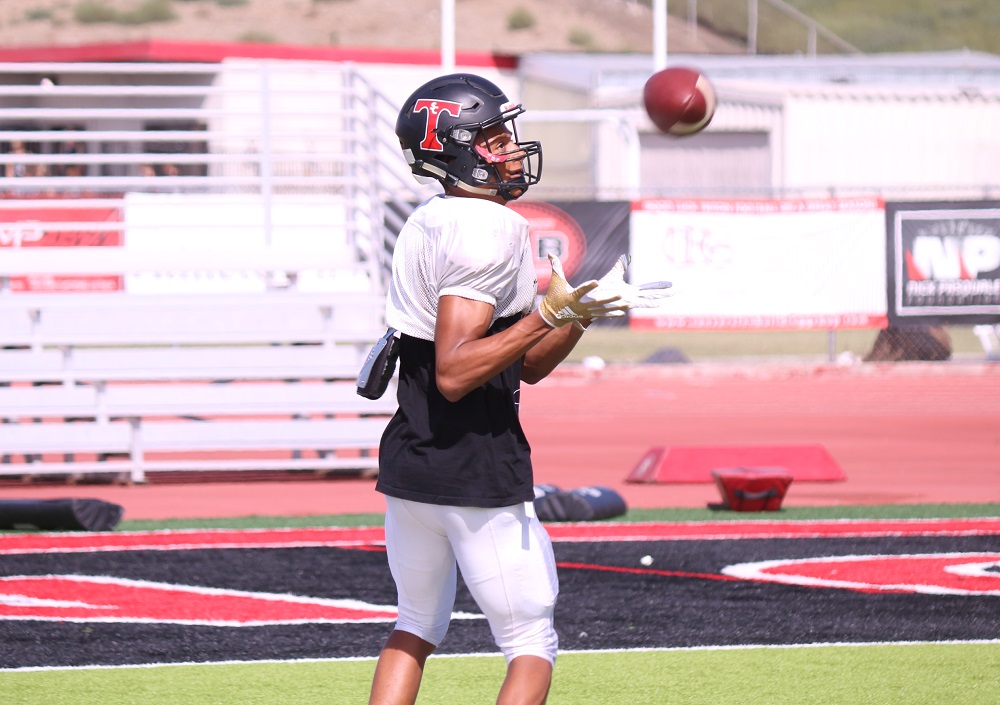 San Clemente lost its top four receivers from 2017 to graduation, and over the offseason, coach Jaime Ortiz said the biggest thing for the offense was to develop a chemistry between quarterback Brendan Costello and the receivers and find guys to step up.

The Tritons have found that guy in senior Jaydel Jenkins.

In 2017, Jenkins pulled in eight receptions for 136 yards and two touchdowns.

Jenkins nearly matched that in the Tritons’ season-opener as he caught eight passes for 134 yards and a touchdown in San Clemente’s win over Oceanside, 34-19, on Aug. 17. He followed it up with a huge three-catch, 123-yard performance in an incredible, last-second loss at Torrey Pines, 47-45, on Aug. 24.

Jenkins has become the No. 1 guy with double the amount of catches and yards as the next highest receiver.

“It feels good to be doing something for the team,” Jenkins said. “Just coming out, making big plays and being that guy that the offense relies on when they need it. Last game, we were tied in the fourth quarter, they throw it to me and I produce. That’s what you’ve got to do. Just help the team as best as you can.”

At 6-foot-3, Jenkins has all the tools a top wide-out needs. He possesses the speed to burn defenders, the agility to juke them out of their shoes and the height to go up and get any pass thrown his way.

“All the DBs (defensive backs) got to worry about him going over the top,” Costello said. “He’s long, big catch radius. He’s definitely a Division 1 player. He blows the top off the defense. He runs really crisp routes. He’s a really good player to have in the offense.”

When the spots ahead of Jenkins on the depth chart opened up, he took his opportunity in the offseason to get better and form that connection with Costello.

“I’ve been working on my speed a lot in the offseason,” Jenkins said. “I’ve been getting faster. Then a couple moves throughout the route. Precise route running, get (defenders) off balance, turn their hips, and you’re just gone. After practice sometimes, (Costello) would call me out and we’d start throwing. That’s pretty much what we did every day all summer.”

Because Jenkins was limited in his role last season, there wasn’t any interest from colleges, but with his torrid start, the looks will come soon enough.

“Without a doubt,” Ortiz said. “He’s going to update his highlight film that we’ll send out next week. I tell our players to give us three good games and we’ll get a tape together and send it to schools. I think he’ll get some interest from Division 1 schools and 1-AA schools and for good reasons.”

The extra attention from schools and opposing defenses won’t phase Jenkins. He said he doesn’t worry about it and just focuses on what he needs to do.

“It just makes me want to be better and make every play for the next seven or eight weeks and try to get to playoffs,” Jenkins said. “I’m looking forward to just keep doing what I’m doing, and sooner or later, these (college) contacts will start coming in.”