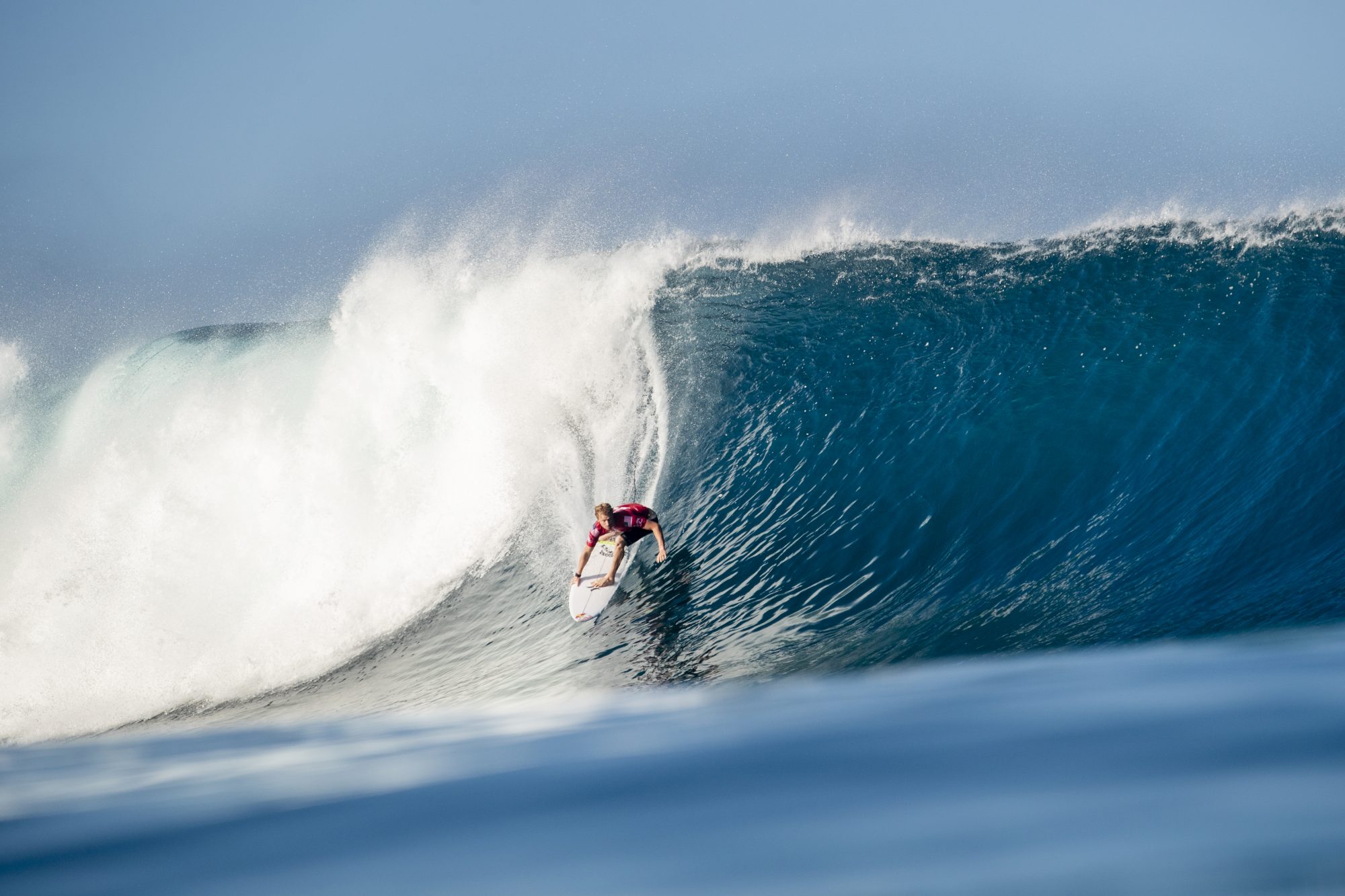 As champagne corks were flying and trophies were being hoisted at the end of a successful season of the WSL Championship Tour, the jubilant atmosphere on the beach at Pipeline quickly morphed into concern, as an emergency rescue was taking place in the water.

Eleven-time world champion Kelly Slater was on stage receiving his Triple Crown trophy when he halted the proceedings.

“We have a rescue going on,” Slater announced into the microphone.

With the Billabong Pipe Masters having just concluded, the ensuing free surf session nearly ended in tragedy as 13-year-old San Clemente surfer Hayden Rodgers suffered a serious wipeout. Reportedly going over the falls and hitting his head on the reef, he was held underwater for two waves.

Hawaiian Water Patrol legends Terry Ahue, Brian Keaulana and his son, Chad, were on the scene, as were city and county lifeguards and a number of young surfers who have recently undergone training by the Big Wave Risk Assessment Group (BWRAG)—a program co-founded by Keaulana that teaches water safety, lifeguard and rescue techniques for situations just like this.

Using hand signals taught in the course, these young surfers were able to help Ahue and Keaulana locate and retrieve Rodgers’ body underwater.

“We had just started heading back and saw that the contest was over, the competition buoys were in. Terry and I are always scanning the shoreline,” Keaulana told the WSL. “I don’t know how many times after Pipe we’ve had the same scenario happen, and it was just that same feeling yesterday . . . driving along, scanning the shoreline and the lineup.”

After Rodgers was brought to the beach, lifeguards immediately assessed his condition. He was reportedly breathing but had suffered lacerations and abrasions to his face. He was then taken to Queen’s Medical Center for treatment. Rodgers is now back home and is expected to make a full recovery.

“There were two kids who probably went to a BWRAG course because we teach this technique: they had one hand straight up and one pointing in the direction of where to go, and that’s what sent me straight to where the kid was,” Keaulana explained. “Everybody played a part. The parts made up the whole.”

Just as they had a couple of weeks ago when they saved Rodgers, the North Shore lifeguards responded heroically.

Suffering a fractured skull and serious lacerations to his head, Christensen was rushed to Queen’s, where he underwent emergency surgery. After five days in the hospital, he has been discharged and is expected to make a full recovery.

“Dec. 31, 2019 would have been my departure from the physical world. My last cognitive interaction with my wife, daughters, family, friends and world. If not for the immediate response by my rescuers,” Christensen wrote on Instagram last weekend. “The prayers and love that flooded in the day of the accident and continue to come are the reason I am still here. Thank you. My reflection on all of this begins. An abyss I can barely begin to fathom. I am aware and present. Motor skills intact. Feeling fortunate, blessed and so very grateful. Let the healing process begin.”

When his friend Sion Milosky drowned surfing Maverick’s in 2011, Christensen held a small gathering at his North Shore farm. Recognizing the need for more safety training and precautions as the limits of big-wave surfing were expanding by leaps and bounds, this meeting was the beginning of the Big Wave Risk Assessment Group.

Today, BWRAG is led by Christensen, Keaulana and a handful of others, including San Clemente’s Greg Long. Through their training sessions and summits, BWRAG’s influence is responsible for saving numerous lives.

Over the past couple of years, the Gudauskas brothers’ Positive Vibe Warriors Foundation has been providing scholarship opportunities for BWRAG training to up-and-coming big-wave surfers.

One of the scholarship recipients, who’d been trained in CPR, was able to save his grandfather’s life last year when he suffered a medical emergency.

Both incidents highlight the dangers of surfing Pipeline, as well as the importance of water safety training. When we enter the ocean as surfers, the importance of having the knowledge and ability to save a life should the situation arise cannot be overstated.