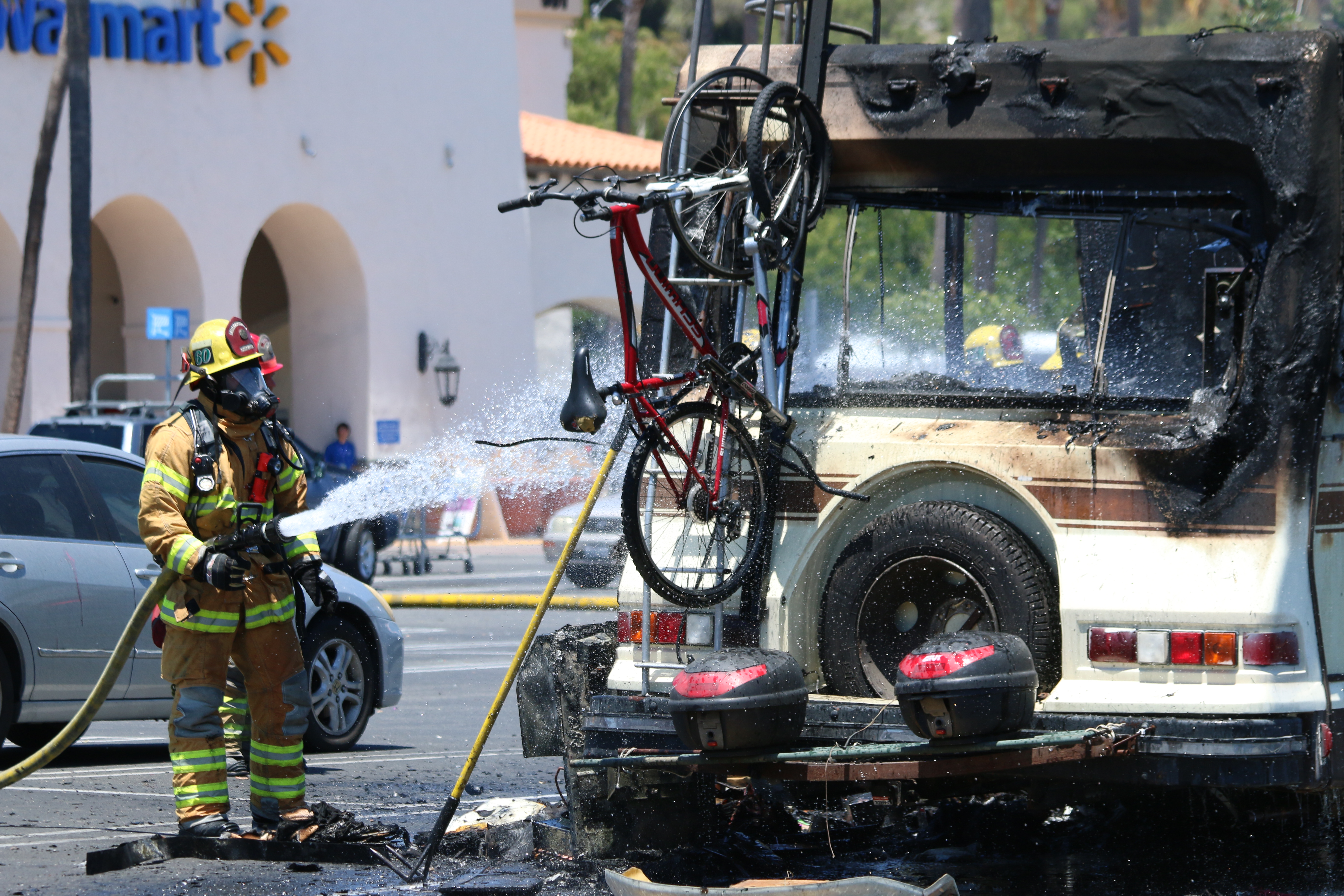 Cause of fire could not be detemined by OCFA investigators; Dana Point man was living in RV destroyed by inferno

A recreational vehicle trailer a man was living in was engulfed in flames about 1 p.m. Thursday and completely destroyed in the Wal-Mart parking lot of the Pico Plaza Shopping Center.

Tom Heacox, the owner of the trailer, said he had been living in the trailer in the Dana Point area. Heacox said he came to Wal-Mart on Thursday to buy a phone charger, and when he tried to start the vehicle it began to malfunction and ignite.

“As soon as I started it up, it just went poof,” Heacox said, adding smoke and flames began to fill the driver’s cab of the RV.

Smoke from the fire could be seen from a few miles away on the west end of Avenida Pico and surrounding areas.

Heacox said there were no warning signs and thinks the fire was caused by a gas leak or some kind of electric malfunction. He said he was not injured during the ordeal, and no other injuries have been reported.

Orange County Fire Authority responded to the scene and the fire was out in about 15 minutes, firefighters on scene said.

As of 2:30 p.m., OCFA investigators were heading to the scene to determine the official cause of the fire.

OCFA Capt. Gilbert Camarena, who was on scene, said fire investigators may be able to obtain security footage from one of the nearby stores within the shopping complex to assist in the investigation.

Update, 7:20 p.m. Capt. Steve Dohman, OCFA fire investigator, said the exact determination of what started the RV fire could not be determined because it was so thoroughly destroyed; however, Dohman said it was most likely some kind of engine failure.

“The thing was so badly damaged it was really hard to tell where it started or what item failed and started the fire,” Dohman said

The trailer was a 1985, 34-foot Chevy Cross-Country. Heacox said he had owned the vehicle for about a year. He said he’s been living in the Dana Point area for about eight years, and in the RV he would park to sleep wherever he could find space.

Inside the blackened vehicle there was bedding, miscellaneous cans and other items—all of which had been destroyed or at least singed by the fire.

Heacox said he has some family members in the area who may be able to help him in his current situation.

People who witnessed the blaze saw Heacox barefoot in the parking lot, and Allison Smith offered him her sandals to wear.

Smith said she didn’t want to see him walking on the hot, black asphalt with no shoes in the middle of the day.

“It’s easier for me to buy a new pair of sandals right now than it is for him,” she said.

Ian Smith, 11, Tanner Hoelscher, 11, and Zach Smith, 8, said they saw the fire as it consumed the vehicle.

“We were taking pictures and we didn’t want to get too close because of the propane tanks on the back of the trailer,” Ian said.

Zach was the first to bring attention to the group of shoppers.

“I looked around, and I saw outside and I asked. ‘Why is the sky black?’” Zach said.

Currently there is a bill making its way through the California Assembly that would protect people from citations for sleeping in their vehicles, as long as it is legally parked. Although the vehicle Heacox was living in was an RV, he said he had not been living in a designated residential park.

San Clemente City Council is poised to pass a resolution at Tuesday’s meeting in opposition to the bill.