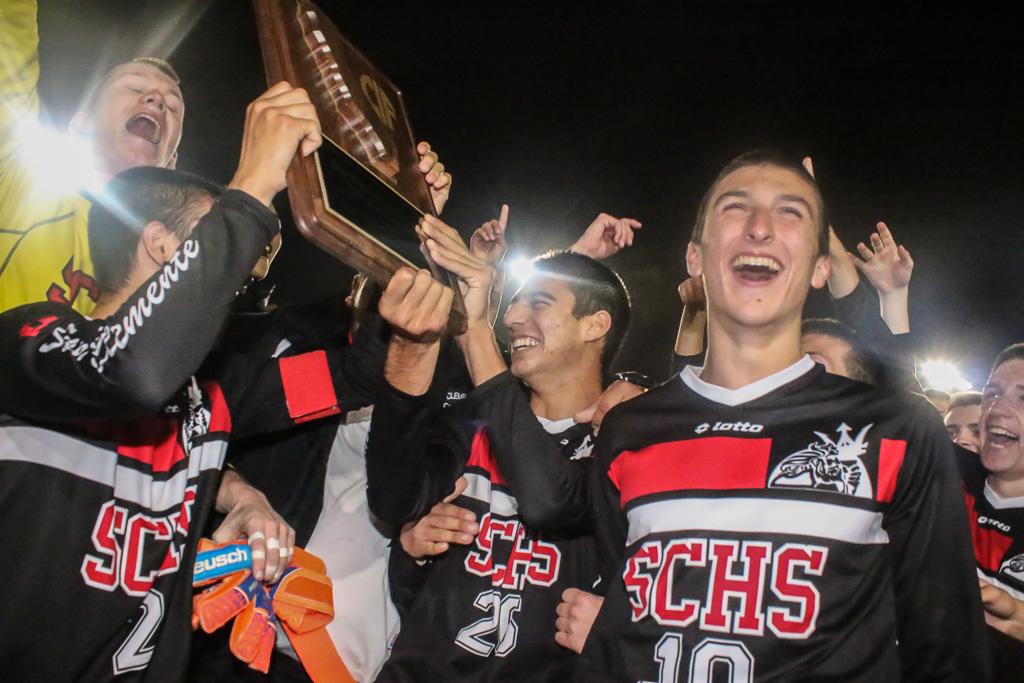 San Clemente boys soccer shook off a few final “ghosts of playoffs past” to cap a stellar season for the ages.

After defeating Cathedral of Los Angeles for the CIF-SS title on Feb. 23, the Tritons met Cathedral again in the CIF SoCal Division I Regional Final and edged out the Phantoms on penalty kicks, 2-2 (4-3), to complete a treble of league, section and regional titles on March 2 at San Clemente High School.

San Clemente had lost to Cathedral last season in the CIF-SS semifinals in the eighth round of penalty kicks. The Tritons avenged that loss in the CIF-SS Division 1 final two weeks ago.

When San Clemente lost to Cathedral last season, the Tritons had lost their previous five playoff penalty-kick shootouts. San Clemente defeated that demon twice this playoff season against Paramount in the CIF-SS second round and Cathedral in the regional final.

Last season ended as the Tritons fell at home in the rain in double overtime of the CIF SoCal Division I Regional Final to Loyola of Los Angeles. San Clemente again played host to the regional final, which pushed into extra sessions in the rain, but the Tritons found themselves on the right side of this match-up.

A trio of playoff wrongs were righted as San Clemente finished its first-ever triple crown season. The Tritons won South Coast League, CIF-SS and CIF SoCal Regional titles. It was only San Clemente’s second regional title following a win in 2011.

The Tritons (26-2-4) finished the season on a nearly impeccable run without a loss in their final 21 games, recording 20 wins and one tie. San Clemente’s last loss came against Cathedral on Dec. 21 at SCHS.

Goalkeepers Curtis Harvey and Ryan Kowarsch combined to post five shutouts in the playoffs and allowed only four goals in the eight games.