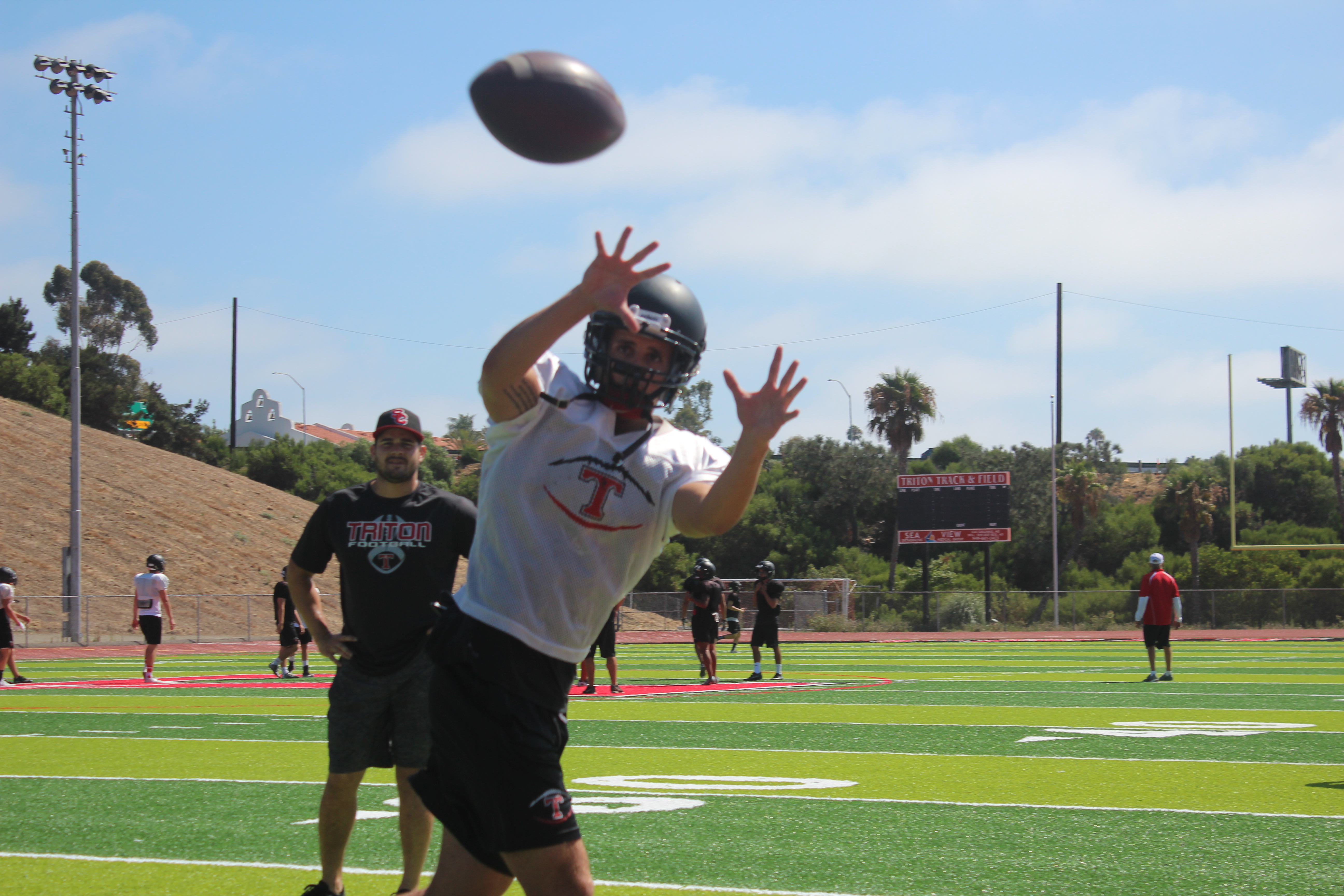 As part of our annual San Clemente High School football preview, we highlight 10 players to watch, five on offense and five on defense.

Kane became one of the more high-profile recruits in Orange County over the offseason for good reason. The versatile 6-foot-5-inch, 215-pound Kane can be deployed as a blocking tight end, at wide receiver and in the slot. Kane, who holds six collegiate offers, says he spent the offseason working on being a more physical presence.

Whitsett was the Tritons’ primary running back in 2016, and piled up 1,106 yards on 182 carries en route to an All-CIF-SS selection. Whitsett, a three-sport athlete, picked up offers from the University of San Diego and Cornell, as well as a preferred walk-on spot at Stanford this offseason, and is poised for a big senior year.

Berman is a four-year starter, the most experienced player on the team and one of the Tritons’ unquestioned leaders. Berman caught 21 passes in 11 games and scored five touchdowns at wide out last year, but will see an expanded role throughout his senior campaign.

Standing at 6-feet-2-inches tall and weighing 195 pounds, Jones will provide the Tritons with a big, speedy target at wide out. Jones was one of the Tritons’ go-to receivers in 2016, where he reeled in 55 catches for 660 yards and seven touchdowns.  Jones is primed for a big senior season, and is garnering collegiate interest.

As the lone offensive lineman returning with extensive experience, Wade’s presence at left tackle will be crucial for the Tritons in 2017. Wade, a 6-foot-5-inch lineman with six collegiate offers, made the move to the all-important blind side after playing at right tackle as a junior.

Shippy is an absolute game-changer on defense, and returns to lead an experienced and talented secondary. Shippy racked up 53 tackles and a team-high six interceptions in just 10 games as a junior. Shippy, a former linebacker, brings a ball-hawk mentality to his position at strong safety and will no doubt provide some highlight-reel plays.

Croft, the team’s leading tackler from last season, returns to anchor the defense at the middle linebacker position. Croft was an integral part of the Tritons’ defense last year, where he recorded 130 tackles and played in all 16 games. Croft felt the team made big strides last year, but “this year we’re trying to perfect the defense and play great football,” he said.

Wilson, along with Shippy and his brother, Branden, returns to anchor an experienced and dynamic secondary. Wilson, an All-CIF-SS selection, made 105 tackles and recorded one interception as a junior, and will be called upon to produce at free safety again in 2017. Wilson will also assist on special teams as a kick and punt returner.

Serving as the team’s shutdown cornerback, Wilson recorded 67 tackles and two interceptions as a junior. Wilson, who was named All-CIF-SS last year, is also committed to play lacrosse at the University of Utah. Like his brother, Bryce, Branden will be called upon to ignite the special teams unit returning kicks.

Harden will provide a big, physical presence for the Tritons’ defensive front. San Clemente is thin on experience on the line and while Harden appeared in just a few games as a junior, he is ready for the challenge of taking on a starting role as a senior