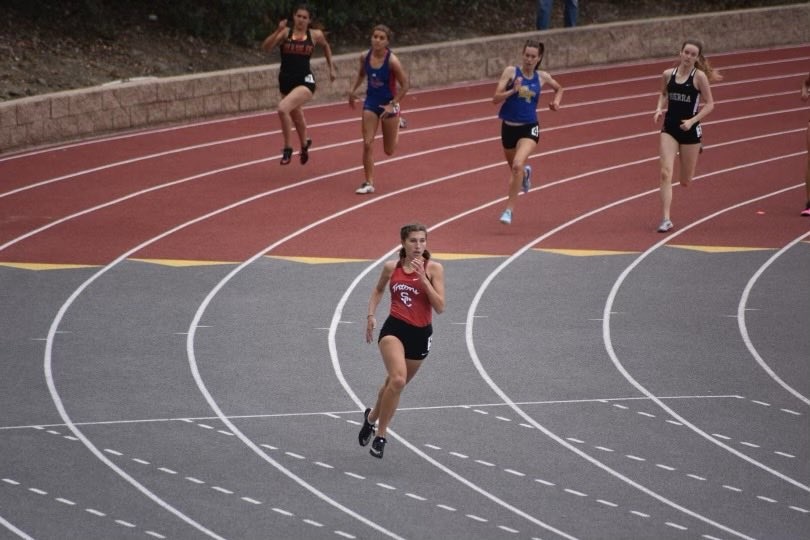 Triton Report: Hawkes Flies as Sprinter of the Meet at County Championships

Hawkes Flies as Sprinter of the Meet at County Championships

San Clemente junior Caroline Hawkes has only gotten stronger as the season has gone on, and she earned her biggest titles yet on Saturday, May 15.

Hawkes burned her competition for wins in the 200- and 400-meter sprints at the Orange County Championships and was named girls sprinter of the meet at Mission Viejo High School.

Sprints and other events were contested with separate heats, and placings were determined by combining all the times, unlike previous years in which athletes would qualify out of their heats for a championship race.

Hawkes ran in the final heat in both of her events and won the 200 meters at 25.38 seconds and the 400 meters at 57.36 seconds. Hawkes was coming off personal-record performances at the vaunted Arcadia Invitational on May 8, where she ran 25.35 in the 200 and 55.84 in the 400. Both Arcadia runs were third-place finishes. Hawkes’ Arcadia 400-meter time is the third-fastest in the CIF-SS this season.

Elsewhere on the track, seniors Madelyn Poole and Cameron Green each posted personal records in the 800-meter race. Green came in fourth place in her heat and 15th overall at 2:26. Poole won her heat and finished 23rd overall at 2:31.

In the girls field events, senior Natalie Vissman and junior Portia Kipper tied for fourth place in the girls high jump. Each cleared the bar at 5 feet even. Senior Sierra Adams had a strong showing in the pole vault with a sixth-place clearance of 10 feet, 6 inches. The San Clemente girls finished eighth overall in the team standings.

On the boys side, junior Aiden Bennett was the top Triton finisher with a third-place showing in the pole vault. Bennett cleared 13 feet, 6 inches.

The Tritons girls tennis team won its opening match in Division 1 with a tight victory over Murrieta Valley, 10-8, on May 12. San Clemente then fell in the second round to top-seeded Beckman, 12-6, on Friday, May 14.

The San Clemente girls soccer team was strong in its opening match in Division 1 with a 3-1 win over El Dorado on May 12. Senior Ava Sinacori scored twice, and sophomore Skylar Regan also scored. However, San Clemente couldn’t find its scoring touch against No. 1 Harvard-Westlake in a 3-0 loss in the second round on Friday, May 14.

In boys soccer, the Tritons suffered the same unfortunate fate as last season. San Clemente once again found itself in a scoreless tie that dragged through two overtime periods and into the extra sessions of penalty kicks. Los Alamitos found the edge on the first extra set of penalty kicks to take the first-round match, 0-0 (6-5).

There are still plenty of playoffs left, however, as two more San Clemente teams learned their draws this week.

The San Clemente boys volleyball team is the No. 5 seed in Division 1, and the Tritons will travel to No. 4 Newport Harbor on Wednesday, May 26. San Clemente boys tennis will host Cypress in the Division 1 first round on Thursday, May 20, with the winner facing No. 2 seed Foothill on Saturday, May 22.

The CIF-SS boys and girls wrestling dual meet brackets were released after press time on Wednesday, May 19. Both the Tritons’ boys and girls teams will be featured after undefeated runs through the South Coast League.