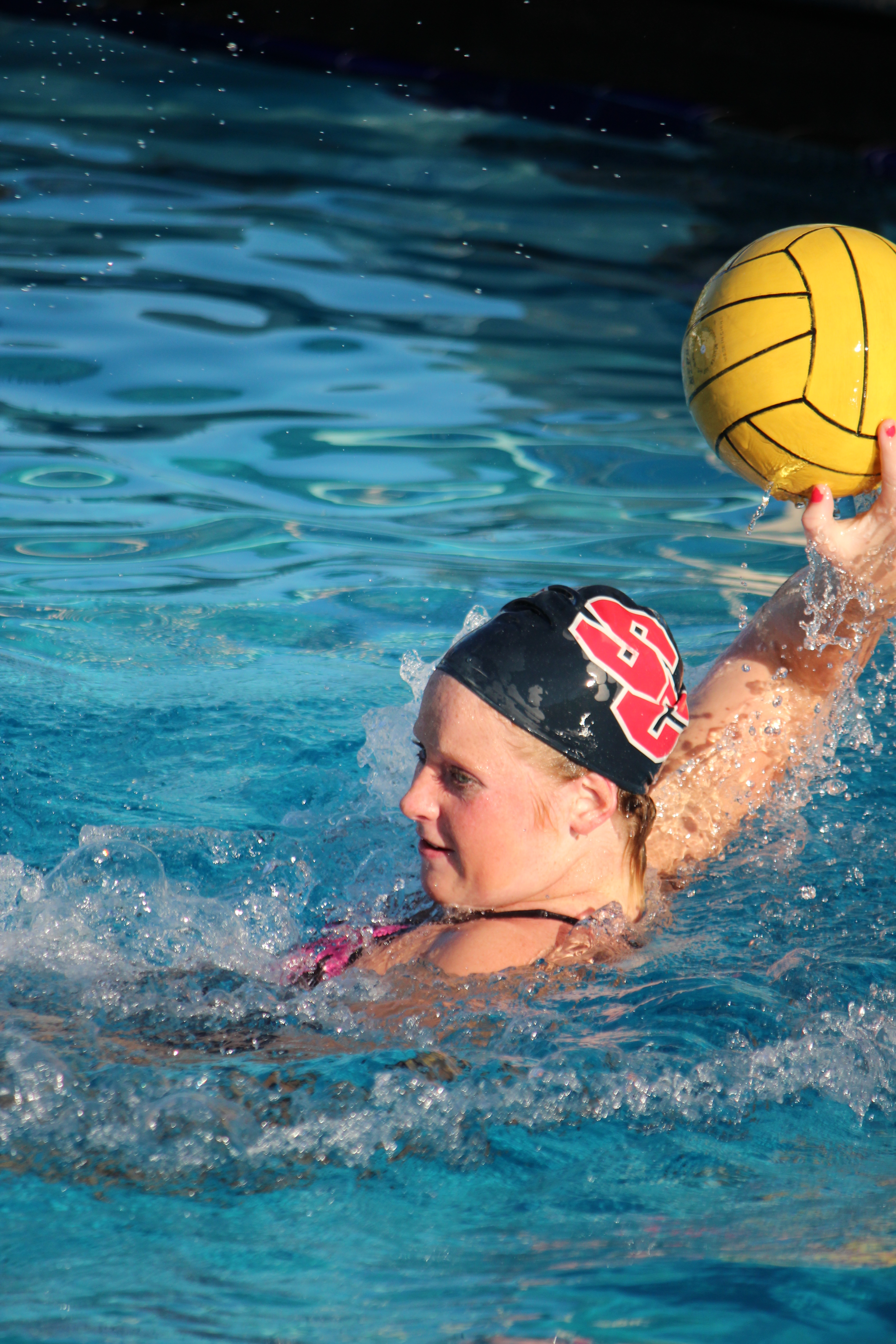 The Tournament of Champions, which was held in Santa Barbara this past weekend, allowed the San Clemente girls water polo team to showcase what has been their secret weapon this season—a balanced offensive attack.

In three of their four matches at the high-profile event, the Tritons (10-7, 3-0)  had four or more players score goals en route to some upset wins and a fourth-place finish.

On January 17 the Tritons beat Foothill, who entered the week as the No. 1 ranked team in the CIF-SS Division 1 coaches poll, 7-6 in overtime. Six different Tritons contributed goals and goalie Madison Atkins made 11 saves to mark the biggest win for the Tritons midway through the season.

The No. 5 ranked Tritons then toppled Division 2 rival Agoura 10-9 in overtime on the same day. Four Tritons netted goals and the team was led by senior Brigette Kimbrough’s five.

Kimbrough would score 11 total goals in the tournament, notch seven assists and 10 steals.

The Tritons ended the tournament with back to back losses to top-ranked Laguna Beach and No. 4 Corona del Mar.

“We have a really balanced attack, which I think it is a key to our success. Every starter can play each position effectively which makes it difficult for teams to match up,” head coach Logan Powell said via email. “We are in a good place, everyone is beginning to get involved, and we are pretty much back to full strength with the addition of (sophomore center) Amber McCutcheon, who had been out for the first part of the season.”

The Tritons will travel to play in the Coronado Tournament this weekend.

A 68-60 South Coast League victory over El Toro on January 21 put the San Clemente girls basketball team in the driver’s seat for the league title. The Tritons (11-8, 3-0) remain the only unbeaten team in league play, with Aliso Niguel lurking behind at 3-1.

The Tritons got to the free throw line 29 times and made 18 of their attempts, the most the team has put up in four games. The Tritons also had a season-high 17 steals in the win.

The Tritons will travel to play Laguna Hills on January 23.

Playing in the Montverde Academy Soccer Tournament was both a blessing and a curse for the San Clemente boys soccer team.

On one hand, as their third-place finish can attest to, the Tritons (16-1-1, 2-0 league) proved they can compete against some of the best soccer teams in the country. But on the flip side, several impact players suffered injuries over the three-day stretch that will leave them slightly shorthanded in the coming weeks.

The Tritons, ranked number 6 nationally according to www.studentsports.com, defeated West Orange (Fla.) 3-2 in the tournament’s opening round, rallying back from a 1-0 halftime deficit. Senior forward Bryce Kaminski scored twice and senior defender Dylan Struthers netted the game-clinching goal with one minute to play.

No. 4 Coppell, the defending Texas 5A State Champion, held the Tritons to only five shots in the first half of their semifinal matchup and took a 1-0 lead into the second half. Again, the Tritons rallied and outshot the Texans 9-4 in the final 40 minutes, but couldn’t get a goal to show for it and lost 2-0.

“Coppell was definitely a quality opponent. We played well enough to get ourselves back in the game but didn’t put the ball in the net,” head coach Mike Pronier said. “It was just a slow start. I’m pretty happy with the way the guys played.”

San Clemente rebounded with a 4-2 victory over American Heritage (Fla.) in the January 18 third-place match. Struthers struck home a booming goal from 30 yards out near the corner of the box and was awarded the Goal of the Tournament trophy.

Kaminski and senior midfielder Oscar Hernandez were named to the All-Tournament team.

No. 1 Montverde Academy won the tournament for the third consecutive year.

After claiming the third-place hardware, the Tritons assessed the damage done to personnel.

Senior sweeper Ethan Gacek fractured his jaw and will be out five weeks. Struthers suffered a deep bruise on his shin in the final game but played well at sweeper, filling in for Gacek, in the Tritons January 22 3-0 win over Mission Viejo.

One of the biggest injuries was suffered by junior midfielder Santiago di Giuseppe, who Pronier said is out indefinitely with a head injury. Di Giuseppe has four goals and a team-leading 13 assists on the season.

Before the tournament, the Tritons picked their team captains for the season, Kaminski, Hernandez, Struthers and senior Alek Cucuk. Kaminski, who has 19 goals in 17 games this season, sees the upcoming league schedule as a task the injured Tritons are up to face.

“That tournament took a toll on us. So the kids on the bench need to see what it takes to win games and take chances … we have some depth,” Kaminski said. “We haven’t reached our potential. We have so much more to come.”

The Tritons will host Capistrano Valley on January 24.

After narrowly defeating San Juan Hills 37-35 in their Sea View League opener on January 15, the San Clemente boys basketball team was on the other side of the coin two days later against Trabuco Hills.

Junior Sam Darnold and sophomore Cole Fotheringham led the way for the Tritons with 11 points apiece.

Darnold broke his right hand in the game against the Mutangs and is eyeing a February return, according to the team’s website www.tritonbasketball.com.

Senior forward Nikki Faris scored a goal in the opening minutes of the San Clemente girls soccer team’s January 21 match against Aliso Niguel, but the Wolverines were able to rally and come away with a 4-1 league victory.

The Tritons (12-2-2, 2-1) had won their previous two South Coast League matches but now trail Aliso Niguel in the standings.

San Clemente will play on the road at Mission Viejo on January 23.

The San Clemente wrestling team traveled to compete in the 5-Counties Invitational from January 17-18. Seniors Mike Marshall and Zack Adcock finished sixth in the 172 and 184-pound divisions, respectively, marking the highest finish for a Triton at the event.

Noah Fiegener (147 pounds) and Tyler Meisinger (140 pounds) were both one match away from placing.

Malcolm has over 25 years of travel ball coaching experience. His most recent position was head coach of the Filly’s Gold travel team based out of Mira Costa.

Malcolm will replace former head coach Paul Hill, who guided the Tritons through the 2010-2013 seasons, compiling a 34-44-1 overall record.

The Tritons have been scuffling of late, and ended last season with a 5-20 overall record. Malcolm, who has lived in the area for 10 years, has been practicing with the team for the past three weeks and says they have the potential to turn things around.

“It’s a great group of girls … I have a good staff too, so I feel really good. The girls are working at it, they’re accepting their challenges. They just need to believe in themselves. The talent is there,” Malcolm said.

Malcolm says he brings an aggressive style of play with him to San Clemente, one that will see players hit and run, bunt and take chances.