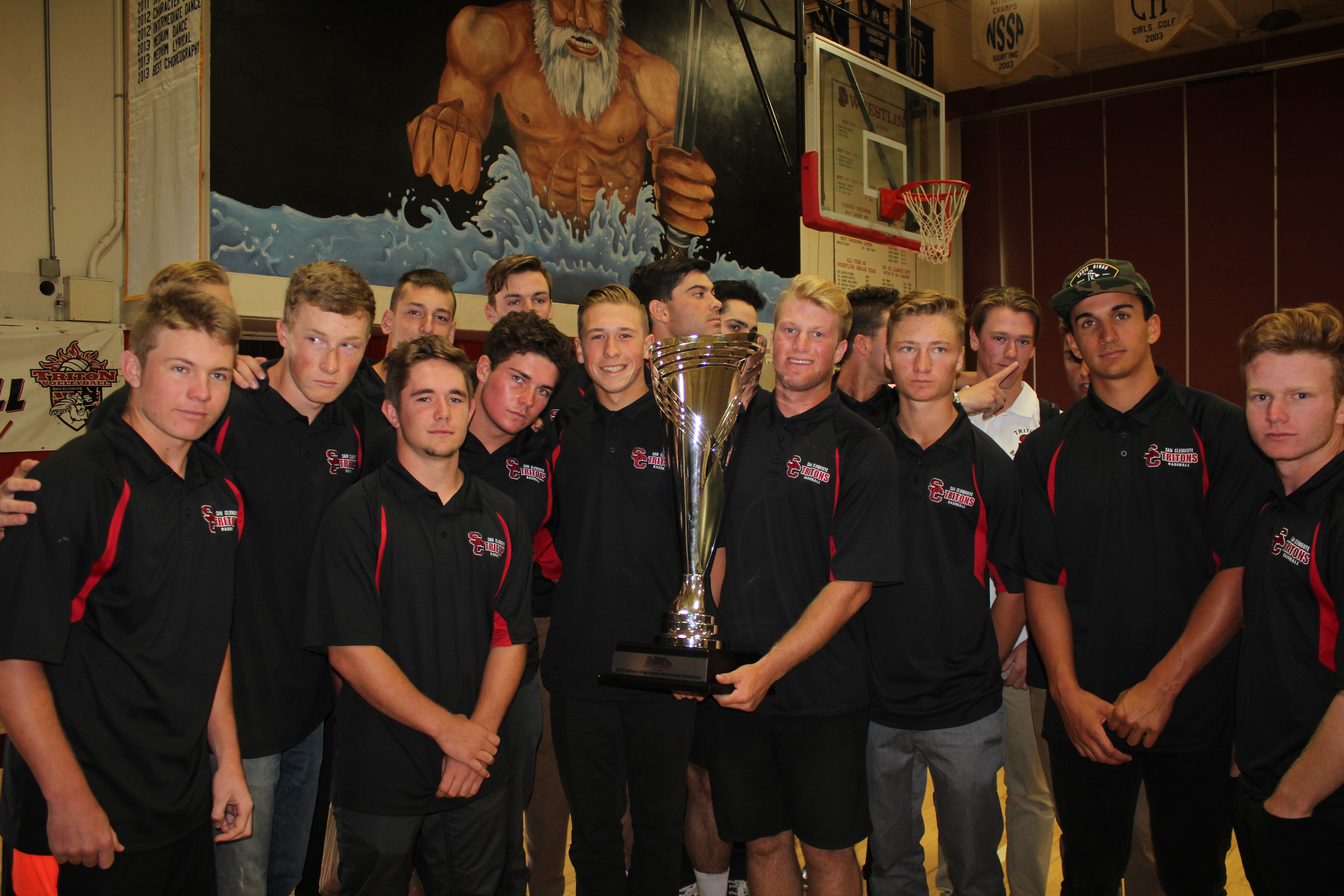 The night before their National High School Invitational championship game against College Park in Cary, N.C., bed check for the San Clemente High School baseball team was at 10:15 p.m.

At around 9:30 p.m., Tritons head coach Dave Gellatly received a call from one of his players. The team had already decided it was time to shut down for the night—they had work to do in the morning.

The Tritons capped off a spectacular run through arguably the most prestigious high school baseball tournament in the country with an 8-3 win over College Park on March 28. The win was San Clemente’s fourth of the week and was the only time they held a lead in the early goings.

The pitching combo of starter Tanner Lawson and reliever Dylan Riddle held the College Park bats at bay while the offense caught fire, scoring all eight runs between the second and sixth innings. Connor Sealey and Chris Puckett both went 2-3 with 2 RBI and catcher Lucas Herbert went 1-2 with two runs scored and an RBI.

By the time the Tritons reached the championship game, they had already been put through the ringer against some of the top teams in the country.

San Clemente fell behind early to Lambert of Georgia in the opening round. Lambert, a team that was ranked No. 1 nationally in the preseason by several polls, had San Clemente on the ropes in the third inning after taking a 5-1 lead.

Riddle, who pitched 6 2/3 innings of shutout ball in the tournament, came on and allowed only three hits the rest of the way as the Tritons mounted a comeback. San Clemente scored the tying run in the seventh and added two more in the eighth to seal a 7-5 extra-inning victory.

“The manner in which we came back (against Lambert), they battled and pulled together. That was, I think at that moment, a defining moment for us where we thought ‘Hey we can win this whole thing’,” Gellatly said. “Once we realized we can play with that particular team, I think that’s where they hit the ground running and really got focused from there.”

The Tritons came into the tournament just days after it was announced that their top pitcher, Kolby Allard, would be shut down for the remainder of the regular season with a back injury. That put the Tritons pitching depth in the spotlight.

Following another come from behind win over College Station in the second round, Puckett took the mound in the semifinals against Huntington Beach and spun a gem. The junior pitched six innings, allowing four hits and one run while striking out five.

The Tritons have plenty of arms and Herbert, the man behind the plate, has been in charge of managing each one.

Gellatly said that he and his staff do not call any pitches during a game and haven’t done so since Herbert transferred to San Clemente as a sophomore three years ago. They trust Herbert, a UCLA commit and potential MLB prospect, with calling the game.

As a member of the USA Baseball 18U team, Herbert has seen his fair share of quality squads. But during those four days in North Carolina, he saw his current team take their concentration to another level.

“We were really focused. Once we got there it was just like, ‘It’s time to go’. Everyone was locked in,” Herbert said. “Sometimes I’ll have to talk to guys and say, ‘Hey, we got to get going’, but when we were out there everyone was just focused. Everyone was coming together as a team.”

The feeling of winning the tournament was somewhat dampened when the Tritons returned home and lost to Mission Viejo 3-0 in a Sea View League tilt on March 31. The Diablos starter Patrick Sandoval was dominant, pitching a complete game two-hit shutout. The senior left hander struck out eight and walked none.

The loss brought an end to the Tritons season-opening 12-game win streak. The game against the Diablos was the first of three consecutive games San Clemente will play this week. They were set to play Laguna Hills on April 1 before traveling to San Juan Hills on April 2. Results were not available at press time.

As part of the San Clemente High School’s 50th anniversary celebration, the Tritons boys volleyball program held a pre-game ceremony on March 26 to honor 50 of their greatest players from the past.

With San Clemente volleyball’s best on hand, the current version of the Tritons squad turned in a solid performance.

San Clemente will travel to play rival Dana Hills on April 2. The two teams have battled for the league title the last three years.

The San Clemente boys tennis team has been led by the strong play of their singles rotation in the early going this season. Michael Bott, Jay Yeam and Billy Whitaker have combined to lose only two sets between them in 10 matches played. Bott is currently undefeated in singles play.