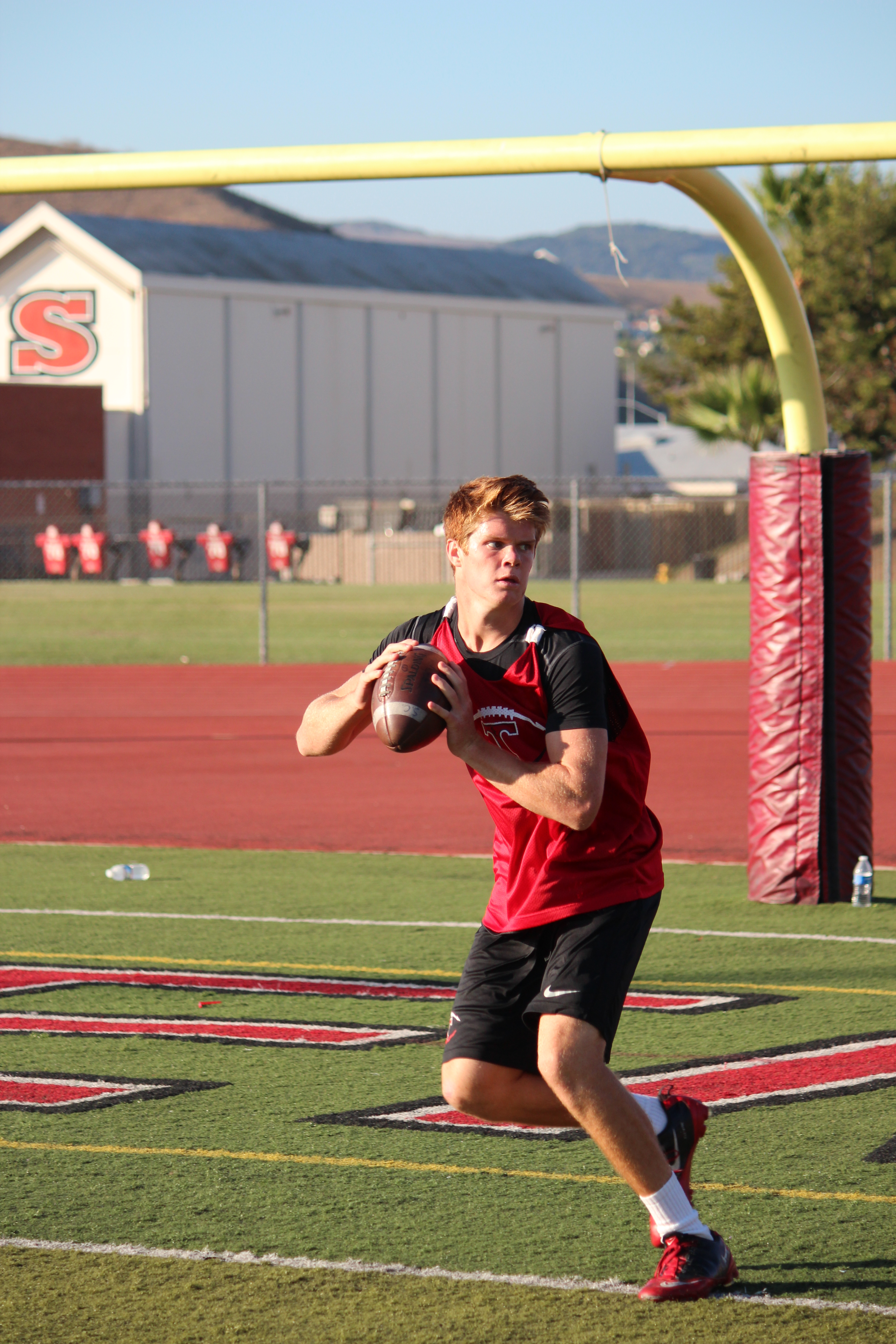 For in-game updates, news and more for all the San Clemente High School prep sports teams, follow us on Twitter @SouthOCsports.

The San Clemente boys track and field team sent only three athletes to the CIF-SS Division 1 Championships at Cerritos College on May 24. But the three they sent—seniors Kelsey Benoit, Rocky Fenton and Arik Nesbit—put on a show.

The three seniors earned enough points to place the Tritons third overall as a team at the event, tallying 39 total points. All three athletes finished third or better in their respective events.

As they have done all season, Benoit and Fenton excelled in the throws.

Fenton had two fouls in his four-throw finals effort in the discus, but his first throw of 172-09 was good enough to win the event by more than five feet. Benoit’s first discus throw proved to be his best as well, as his toss of 163-11 earned him a third-place finish.

Benoit only had one qualifying throw in the shot put, unleashing a throw of 58-00.5, and finished third in the event. Fenton placed eighth following a throw of 53-11.50.

As a team, the Tritons finished behind Great Oak and Long Beach Poly, who placed first and second, respectively.

Chronister placed ninth in the discus, posting a throw of 118-00. Chronister was just the second Tritons thrower to advance to the finals since 1981.

After defeating Woodbridge 2-1 in a closely contested wild card round of the CIF-SS Division 2 Championships, the San Clemente baseball team found themselves in yet another tight spot against Chino Hills in the first round on May 22. The Tritons and Chino Hills were scoreless through six frames until the seventh inning, when the Huskies scored the winning run to take a 1-0 victory.

Chino Hills senior Jake Taylor hit a triple and scored the lone run of the game in what turned out to be a pitcher’s duel.

San Clemente (22-11) junior starting pitcher Kolby Allard was sharp over 6 1/3 innings, allowing only one hit while striking out a season-high 14 batters.

Chino Hills starter Bailey Falter matched Allard on the day, throwing seven innings in a two-hit shutout. Falter did not walk a batter and struck out nine.

Several Tritons were recently named to the All-Sea View League first and second teams. Allard, along with senior infielder Kent Burckle, were named to the first team. Burckle batted .484 and held a .578 on base percentage as a senior. Allard, a junior, went 6-2 on the season with a 1.32 ERA.

Greenberg and Whitaker were the top point getters for the Tritons in the first two rounds of CIF-SS team play.

The San Clemente football team held an NCAA Showcase event on May 21, drawing some high-profile collegiate coaches to the sidelines of Thalassa Stadium.

“It is a great platform for our student-athletes to get exposure for the next level and our kids understand that,” San Clemente head coach Jaime Ortiz said. “The players have done a great job during spring and we are excited about the future.”

Over the last two months, recruiting eyes have been on soon to be senior quarterback Sam Darnold. Darnold has racked up 11 offers in the offseason, most recently garnering an offer from Oregon State on May 19.