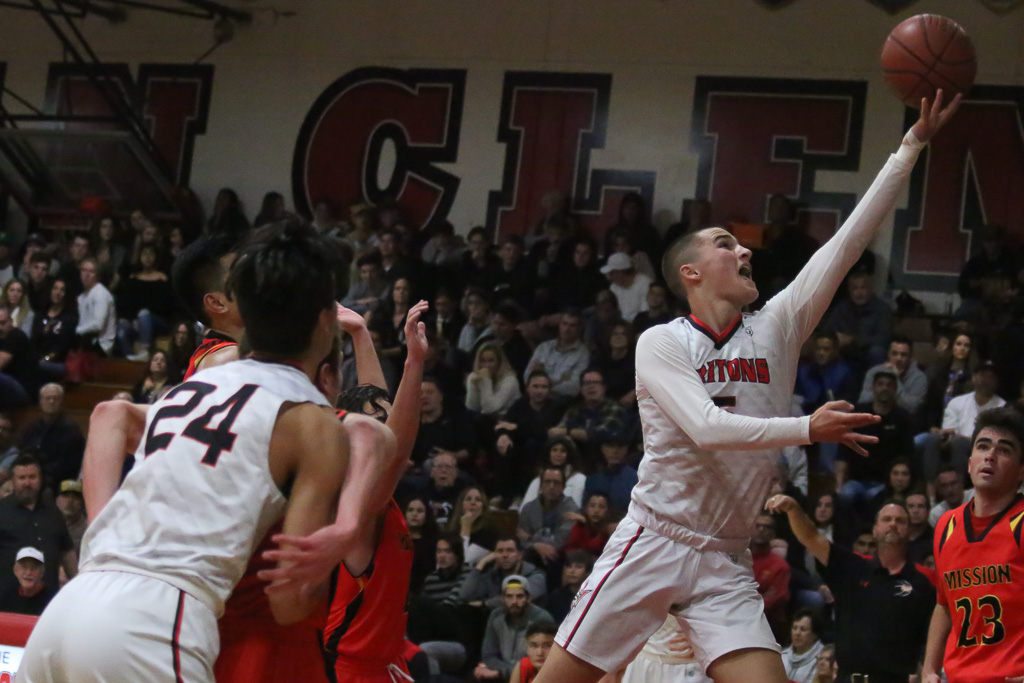 The San Clemente boys basketball team is going to be in a fight to the finish in the South Coast League.

In a big swing game for the league playoff picture on Friday, Jan. 18, The Tritons cut a 13-point fourth-quarter deficit to only four points on a four-point play by Anthony Smetona, but Mission Viejo responded with a dagger 3-pointer and closed out the win, 59-50, to take sole possession of third place in the South Coast League at San Clemente High School.

As of press time, San Clemente (11-12, 2-3) was a game behind Mission Viejo (19-4, 3-2) in fourth place with four games to play, three in league. If San Clemente finishes outside of the top three, the Tritons will need to post a record of .500 or better for a shot at qualifying for the CIF-SS Division 2AA playoffs.

San Clemente played at co-league leading Capistrano Valley on Wednesday, Jan. 23, but results were not available at press time. The Tritons host the other co-league leader, Trabuco Hills, on Friday, Jan. 25.

San Clemente finishes the season with a Coast View crossover game at El Toro on Monday, Jan. 28 and the league finale at Aliso Niguel on Wednesday, Jan. 30.

The San Clemente boys soccer team is locked in.

San Clemente has posted 10 shutouts this season with Kowarsch and Harvey splitting their minutes played near evenly, 645-635.

The Tritons played at Capistrano Valley on Wednesday, Jan. 23 and could have clinched the South Coast League title once again with a win. Results were not available at press time.

San Clemente plays at Mission Viejo on Monday, Jan. 28 and hosts San Juan Hills on Wednesday, Jan. 30 to close out the regular season.

The San Clemente girls water polo team is waltzing to a repeat league title in the South Coast League, albeit with a shortened schedule.

The Tritons (10-11, 3-0) closed their regular season league schedule on Tuesday, Jan. 22, but results were not available at press time. In the first three league games, San Clemente outscored league competition by a 33-goal margin, 55-22, with most of the scoring coming in a 21-12 win over El Toro in the opener.

With the CIF schedule being pushed up and the Coast View teams maneuvering schedules due to winter break, the South Coast League enters a new phase. After each team only played each other once, the water polo teams will play in a league carousel tournament on Tuesday, Jan. 29 and Thursday, Jan. 31

For the first time in NFL history, San Clemente will have player representation on a Super Bowl squad.

Kyle Murphy, 2012 Triton graduate, is an offensive tackle on the practice squad for the Los Angeles Rams, who are on to Super Bowl LIII in Atlanta on Feb. 3. The Rams beat the New Orleans Saints in overtime, 26-23, on Sunday, Jan. 20 to win the NFC championship.

Murphy is in his third season in the NFL. Murphy was drafted out of Stanford in the sixth round of the 2016 NFL by the Green Bay Packers. Murphy played two seasons in Green Bay with three starts in 2017 before being placed on injured reserve and being released at the end of the season.

As a senior at San Clemente, Murphy was named South Coast League MVP as the Tritons went 12-2 and advanced to the 2011 CIF-SS Pac-5 Division title game.

The San Clemente football program is extending its hand out the community again for its yearly youth football camp.

The camp is for players from fourth to eighth grade and will take place on Friday, Feb. 8 from 7-8:30 p.m. under the lights at San Clemente High School.

The Tritons varsity coaching staff will run players through drills to focus on individual offensive and defensive skill development for all levels. The camp will also introduce the young players to the latest training for flexibility, balance, explosiveness and core strength.

Sign-ups are online at www.tritonfootball.com.