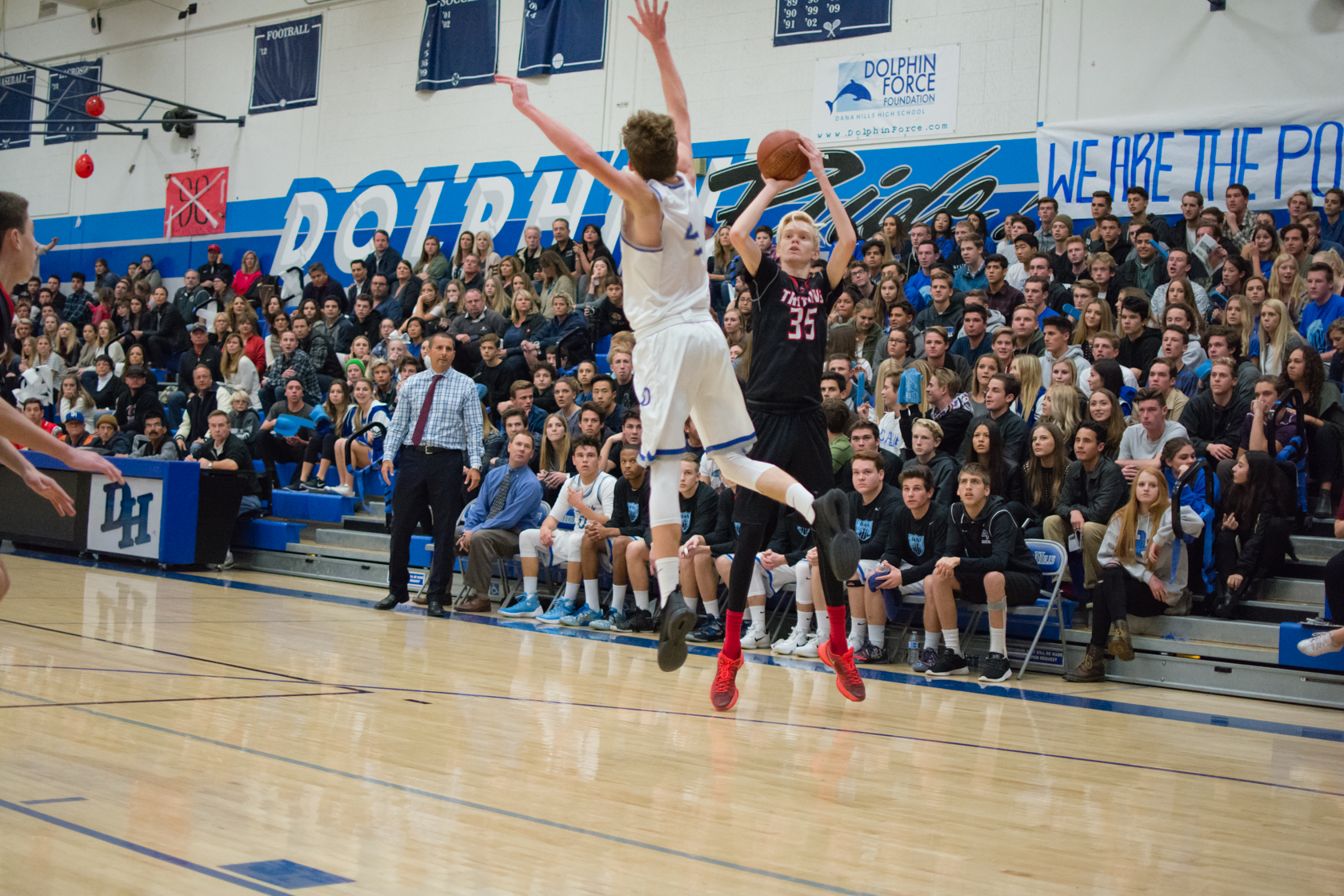 Senior Cole Fotheringham poured in 15 points on the night, and James Paterson scored 10 in the victory.

San Clemente shut down the Diablos in the second and third quarters en route to a 60-48 victory. Mission Viejo led 19-15 after the first quarter, but the Diablos were held to just 14 points over the next two quarters while the Tritons went on a 31-14 run.

Fotheringham had his most productive game of the season against Mission Viejo, recording season highs in both points scored (20) and rebounds (14).

Depth has been key for the Tritons on offense this season, and the team is averaging 68.1 points per game. Five Tritons, a group that includes Jake Cameron (11.6 points per game), Gage Shelmidine (14.3), Birmingham (11.2), Dillon Waikle (14.2) and Cole Fotheringham (10.8), are all averaging double-digit point totals.

As a team, San Clemente is shooting 47 percent from the field and is knocking down 3-pointers at a 37 percent clip.

In its South Coast League opening match, the San Clemente boys soccer team surrendered a decisive second-half goal to Capistrano Valley on Jan. 8 in a 1-0 loss. The Tritons (6-8-4, 0-1) ended a two-game skid on Jan. 13 with a 4-1 victory over San Juan Hills.

Four different players scored goals for the Tritons against the Stallions, a positive sign for an offense that has been having a hard time finding the back of the net in recent weeks. Nima Amjadi, Ben Giacobello, Dean Jacobsen and Jonathan Payan all scored for San Clemente and goalie Cameron Dickie recorded two saves.

San Clemente will host defending league champion El Toro (5-3-4, 0-1) on Jan. 22. Like the Tritons, the Chargers, the No. 8-ranked team in CIF-SS Division 1, stumbled out of the gate to start league play, falling to San Juan Hills 1-0 in both team’s league opener on Jan. 8.

The Laguna Hills wrestling team won its first five matches in a dual league contest against San Clemente on Jan. 12 and did not let up. The Hawks continued to get the better of the Tritons on the night, securing a 55-13 victory and the program’s 29th straight league title.

The Tritons will compete in the Temecula Invitational Jan. 15-16.

San Clemente’s London Irwin also scored a goal in the win, which puts the Tritons (7-3-5, 1-0-1) at the top of the South Coast League standings.

On Jan. 7, the third-ranked Tritons hosted top-ranked Aliso Niguel in a league-opening match. San Clemente jumped out in front in the first half following a goal by Gabi Drabkin that gave the Tritons a 1-0 advantage. In the second half, the Wolverines responded when Remy Mathews netted an equalizing goal to close out the scoring.

Brzykcy made a season-high 18 saves against Aliso Niguel. As of Jan. 13, Brzykcy’s mark of 108 saves this season was tops in Orange County.

After falling to El Toro 7-6 in its South Coast League opener, the San Clemente girls water polo team will take a break from league play and head north to compete in the Santa Barbara Tournament Jan. 14-16.

San Clemente (8-4, 0-1) improved its league record on Jan. 12 following a 17-5 triumph over Aliso Niguel on the road. Amber McCutcheon’s six goals led the Tritons. Alaina Cousineau and Tera Richardson each scored three goals in the win.

Following the run through the Santa Barbara Tournament, San Clemente will return to league play with a road game against rival Dana Hills on Jan. 26.

Girls Basketball Gets Back on Track in Win Over Hawks

The Hawks scored just 12 points in the second and third quarters combined, while the Tritons poured in 32 to take a commanding lead into the fourth quarter.