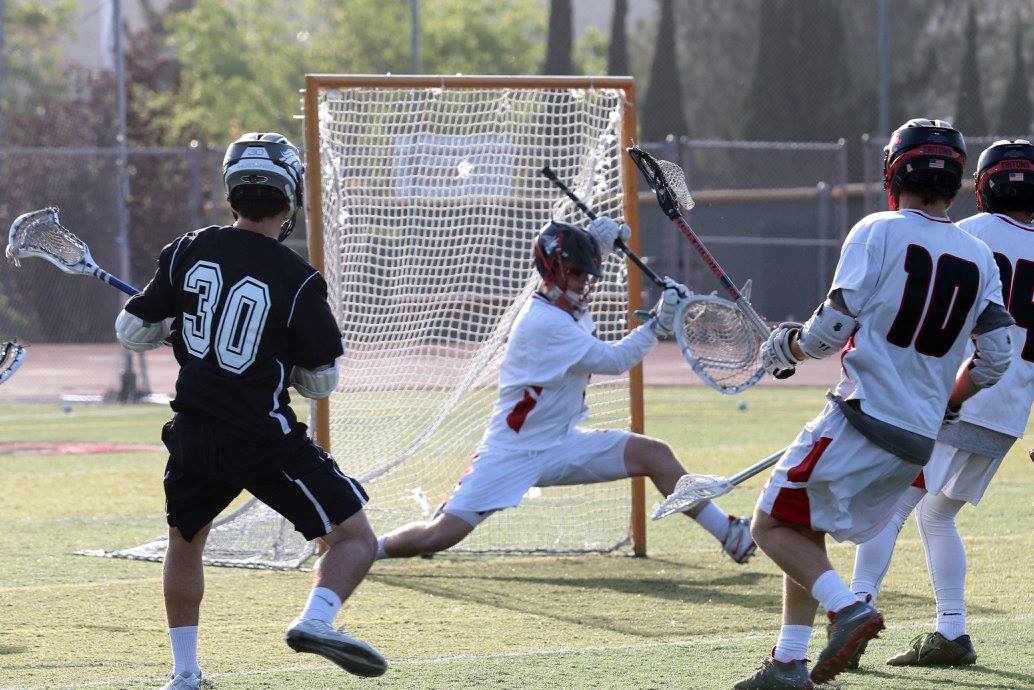 The San Clemente boys lacrosse team surged to a 17-6 South Coast League victory over Trabuco Hills behind a strong second-quarter performance on April 14. It was the Tritons fifth straight league victory.

San Clemente (9-8, 5-0) trailed the Mustangs 2-1 after the first quarter, but scored five unanswered goals in the second to take a 6-2 lead into the half. The San Clemente offense continued to hum in the second half and capped the game off with a seven-goal performance in the fourth quarter.

San Clemente will travel to play league rival Tesoro on April 21. The Tritons narrowly edged the Titans 7-6 in the teams’ first meeting on March 30.

Trabuco Hills was able to leapfrog past the San Clemente baseball team last week by pulling off a pair of Sea View League victories.

On April 13, the Mustangs erased an 8-3 deficit by scoring five runs in the sixth inning. San Clemente starting pitcher Andre Pallante held Trabuco Hills to just two runs through five innings but the Mustangs got to the Tritons bullpen late. Trabuco Hills scored once in extra innings to secure a 9-8 win.

Trabuco Hills wrapped up the season series against the Tritons following a 4-3 win on April 15. The Mustangs’ offense recorded six hits and four runs in four innings against San Clemente starter Michael McGreevy in a 4-3 victory.

The losses to Trabuco Hills put San Clemente in solo third place in the league standings. The Mustangs jumped into the No. 2 spot and San Juan Hills sits in first place.

San Clemente (12-6-1, 3-3 league) lost to Tesoro 8-5 in a Coast View Conference crossover game on April 18. The Tritons will play a crossover double header against Dana Hills at home on April 21.

The Bruins offered Sears after watching him practice on April 19. The Texas A&M offer came on April 20.

Sears’ list of collegiate offers now stands at 17 and head coach Jaime Ortiz said he expects more to flood in over the next few weeks.

Sears had a breakout junior season for the Tritons in 2015, throwing for 2,697 yards and 37 touchdowns. He also rushed for 862 yards and nine scores and led San Clemente to the CIF-SS Southwest Division title game.

The San Clemente boys volleyball team swept visiting Trabuco Hills in three sets on April 14 to move into a tie for first place in the South Coast League. The Tritons won the match 25-23, 25-21, 25-22.

San Clemente has been playing without a few key players in the lineup due to injuries, but has got a huge boost from up and down its roster. Kyle Merrill, who has emerged as one of the team’s leading offensive players in recent weeks, recorded a team-high 15 kills against the Mustangs. Jess Hunt had nine kills and Dillon Waikle had eight. Waikle also had nine blocks.

The doubles duo of Chris Torcaso and Tony Gregory did not lose a match in league all season and compiled a perfect 17-0 record.

Bott was scheduled to compete in the prestigious Ojai Invitational April 20-22. The doubles team of Yeam and Caden Spencer will also compete in Ojai.

Golf Stays in First With Win Over Chargers

The Tritons made a major move in the league standings last week that started with a 192-192 sixth-man scorecard tiebreaker win over Dana Hills on April 11. San Clemente then swept Tesoro in back-to-back matches.

San Clemente and Dana Hills are currently tied atop the standings with one match left to play. The Tritons will host El Toro on April 21. The league finals tournament is scheduled to take place April 25-26.

The wins got the Tritons (8-8-1, 2-0) off to an undefeated start to league play. San Clemente will host San Juan Hills on April 21.

The San Clemente girls lacrosse team defeated Mission Viejo 11-4 on April 19 in a nonleague match. The win ended an eight-game losing skid for the Tritons (5-9, 0-5).