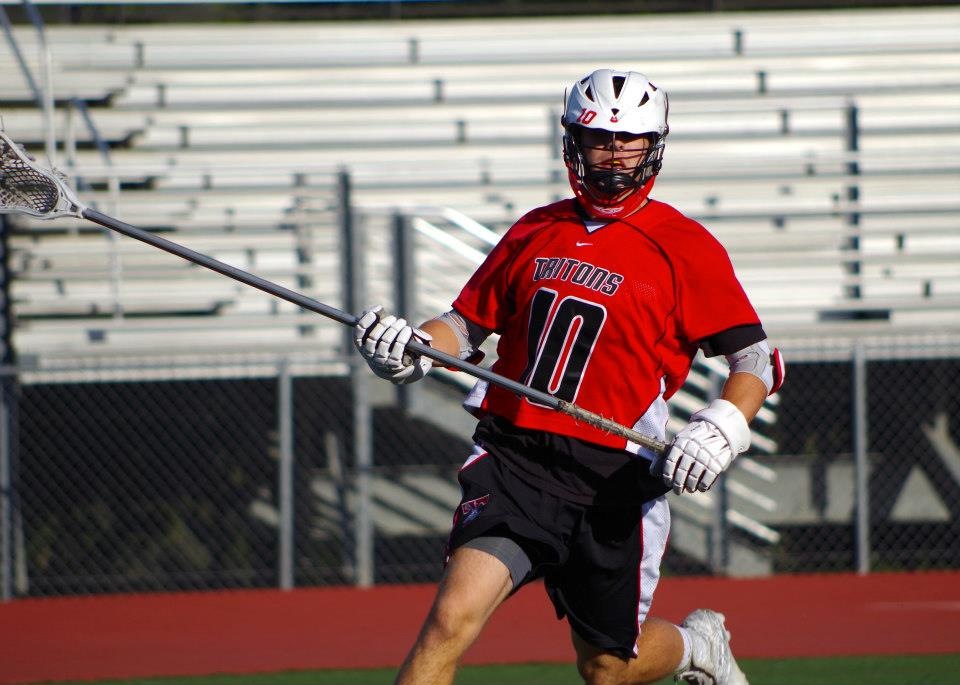 Tesoro jumped out to an early 5-2 lead in the first quarter. The Tritons were able to rally and were led by senior Austin Streeter’s three-goal effort to seal the win. The victory puts the Tritons in the driver’s seat for the title in 2014.

The win was a welcome one for the Tritons, who had lost two closely contested matches several days earlier.

Playing against No. 3 ranked Corona del Mar last week, the San Clemente boys lacrosse team found themselves in a defensive battle that ended in a 4-3 loss. When the Tritons played host to top-ranked Foothill on March 29 eight days later, it was another close game, but one that saw both offenses firing on all cylinders.

The Knights overcame an 8-5 halftime deficit, and got enough late goals to survive a potential upset in a 17-16 win over the Tritons.

No. 5 San Clemente (6-2, 3-0 league) found their offensive groove in the second quarter. Foothill was able to build a 4-1 lead by dominating the faceoff circle, but once San Clemente and Will Bozarth found success in the spot, the Tritons went on a 5-0 run to take the lead. The Tritons got two goals from senior Collin Zines and Jack Renard and one from Torin Alm in the span of six minutes to take a 6-4 advantage.

With the Tritons dominating possession in the second, Foothill was held without a shot on offense until just under three minutes to play before halftime.

Foothill (7-1) answered in the third quarter with a run of their own. Led by junior attack Nate Marano the Knights scored four unanswered goals to tie it up 9-9. Marano scored once and tallied an assist in the quarter.

The game’s final 12 minutes was an offensive display that resulted in six lead changes and a combined 14 goals scored by both teams.

San Clemente came back from being down 11-10 when Tritons senior attack Peyton Garret drove to the net, collected a pass from Renard and tied the game on a one-man advantage. Renard scored one minute later to give the Tritons the lead.

Both teams committed multiple turnovers in the final minutes and exchanged blows until the score stood at 16-16. With just over one minute to play, Foothill’s sophomore attack Kevin Kodzis netted the game winner on a feed from Nick Matzek, ending the scoring barrage for good.

“Our defense did not perform today. You look at the Corona del Mar game and we held them to four goals and our offense didn’t perform. Today our offense performed and our defense failed,” San Clemente head coach Mike Hutnick said. “It was a high scoring game and a shootout, it came down to the wire and there were too many turnovers, which has been our Achilles heel.”

San Clemente will continue their tough stretch of games and travel over 1,000 miles to face the No. 4 team in the west of the www.insidelacrosse.com Under Armor Regional ranks, Arapahoe of Colorado, on April 8. From there, the Tritons will play Smoky Hill (April 9) and No. 1 Cherry Creek (April 10).

Senior forward Bryce Kaminski had a standout year and was named the league MVP. Kaminski proved himself to be a prolific scorer and netted 26 goals on the season. He scored a goal in all four of the Tritons postseason games and had a streak of 14 consecutive games, dating from Dec. 13 to Jan. 22, where he found the back of the net.

Singles Dominate for Tritons Tennis in Win Over Cougars

The San Clemente boys tennis team took another step in the right direction in league play on March 27 in an important match against rival Capistrano Valley. The Tritons came away with a 13-5 victory thanks in large part to a dominant performance from their singles players.

Holding on to a two-run lead over Ayala in the top of the seventh inning on April 1, San Clemente pitcher Dylan Riddle threw a ball in the dirt that got past catcher Lucas Herbert, allowing one Ayala base runner to score. The ensuing throw back to home plate got past Riddle, who was covering the base, prompting another Ayala base runner to try for home. Herbert recovered, blocked the plate and applied a tag with the ball and the runner was called out. The Tritons thought they had secured a close, 8-7 win in the fourth round of the Anaheim Lions Tournament.

But before they could celebrate, the call was reversed.

A meeting between umpires resulted in a reversal of the initial call and an obstruction was slapped on Herbert, allowing the run to score and the game to continue.

San Clemente would rally one inning later and score the winning run on an Ayala throwing error, ending the game for good. Both teams were set to play again on April 2. Results were not available at press time.