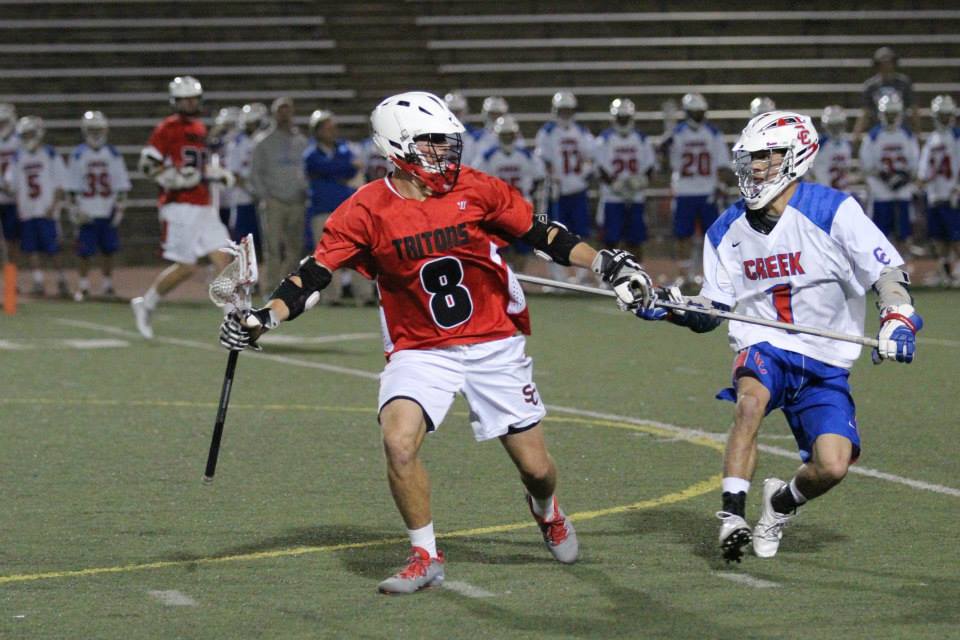 For in-game updates, news and more for all the San Clemente spring sports teams, follow us on Twitter @SouthOCsports.

Tritons Volleyball Comes Back in Win Over Dolphins

For two games, it looked like the San Clemente boys volleyball team was going to fall victim to spring break rust. After not playing a match for 12 days, the Tritons quickly found themselves in an 0-2 hole on the road against rival Dana Hills on April 15, the Dolphins eyeing a possible three-game sweep.

But after a convincing win over their opponents in the third game, the Tritons found their rhythm and the rust was shaken off. The Tritons cleaned up their errors and won the final three games to claim a five-set, 20-25, 25-27, 25-17, 27-25, 15-12 South Coast League victory.

“That’s spring break. It took a while for us to get our rhythm. We made a lot of unforced errors those first couple of games. I told them they’re going to make mistakes, other teams, they’re going to have problems but we can’t keep compounding those with our own,” San Clemente head coach Ken Goldstone said. “I thought we kind of hung in there and played hard. I told them if we can just get a game and get some rhythm, we’ll be OK.”

San Clemente (14-4, 3-0 league) kept the match alive in the third set, going on a late 6-0 run to pad their lead to 23-13. Junior middle blocker Matt August recorded a solo block and assisted on two more during the run.

In the fourth, the Tritons benefitted from a Dolphins unforced error with the match on the line. Dana Hills (12-6, 3-1) held a 24-23 lead and could have put the match away, but instead an error was recorded at the net and the Tritons had a second chance. Another block from August and a Peter van Liefde kill made it 27-25, forcing the decisive fifth set.

Dana Hills led 10-7 in the fifth set and the Tritons tied things up following two Dolphins errors and an Aaron Strange block. Following an ace from junior Marcus McGuire that barely landed in play on the back line, junior middle blocker Brandon Hopper recorded a block and secured the match for the Tritons.

The Tritons boys varsity lacrosse team traveled to Denver last week to take on some of Colorado’s best lacrosse programs, including a pair of teams ranked in the Western Region Top-10 by Inside Lacrosse. The Tritons finished the road trip with a 1-2 mark.

The trip started on April 8 against the two-time defending Colorado state champion Arapahoe (8-1).

After playing to a 2-2 draw at the end of the first quarter, the Tritons could do little to stop the Warriors offense in the second, as they scored eight times to take a 10-5 lead. San Clemente rallied, but ultimately lost, 17-12. Seniors Peyton Garrett and Collin Zines and junior Jack Renard led the way for San Clemente by scoring two goals and two assists each.

San Clemente bounced back from the loss with a 14-6 win over Smoky Hill on April 9, in a game played on the field at Denver University. The Tritons were able to storm to a quick 9-0 first-quarter lead and led 11-1 entering the fourth quarter.

Senior midfielder Will Bozarth was efficient in the faceoff, winning 19 of 24 draws to set the pace. Senior Austin Streeter (four goals, one assist), Renard (three goals, one assist), Torin Alm (three goals) and Garrett (two goals, one assist) led the offense. The Tritons finished with a 40-19 advantage in ground balls against the Buffs. Senior defender Stone Sims had three takeaways on defense, while Max Lepley, Garrett and Caleb Bozarth each had two.

On April 10, San Clemente played Cherry Creek (7-2) and lost 11-8. After falling behind quickly 4-0, San Clemente narrowed the Bruins’ lead to 6-4 at halftime by way of a first-half hat trick from Renard.
But Cherry Creek stretched the lead quickly to 8-4 after the restart and the Tritons were not able to overcome the deficit. Streeter added a pair of goals and Austin Boyer made nine saves in goal.

San Clemente (9-4, 5-0) returned home and defeated Tesoro 11-5 on April 15 in a South Coast League game, solidifying their place at the top of the standings. They will play on the road at Agoura on April 19.

The San Clemente softball team scored four runs in the sixth inning, but it was not enough to overcome the lead built by rival Dana Hills on April 15. The Dolphins took an early lead and held on for a 7-5 win in the Tritons’ South Coast League opener.

Tritons Baseball Suffers Back to Back League Losses
The San Clemente baseball team lost a close game to Dana Hills on April 8, giving up a seventh inning walk-off hit in a 4-3 loss. In their next game, which came on the road against Aliso Niguel on April 11, the Tritons saw a 3-2 lead slip away as the Wolverines scored four times in the final three innings to claim a 6-4 Sea View League victory.

The two losses followed what was a county-best ten-game win streak for the Tritons (15-5, 2-2), which ended after the loss to Dana Hills.
San Clemente was set to play Laguna Hills on the road on April 16. Results were not available at press time.