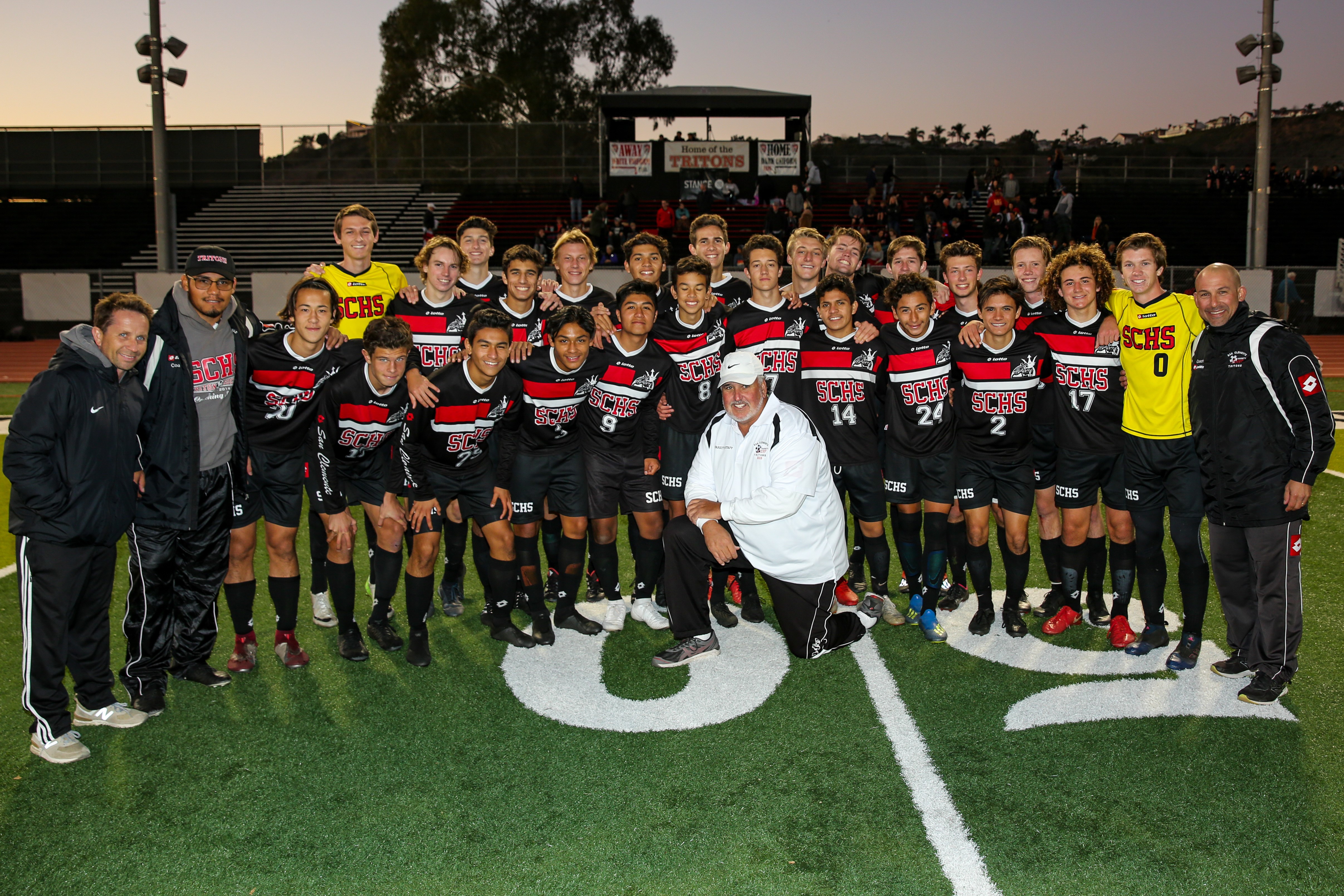 The 400 club has another member at San Clemente High School.

San Clemente got two goals each from seniors Blake Bowen and Quinn Richards to spark the rout of the Dolphins. San Clemente led 4-1 at halftime. Seniors Liam Linas and Koosha Jadbabaei also scored for the Tritons. Senior goalkeepers Ryan Kowarsch and Curtis Harvey each manned a half in net.

Pronier kept rolling to No. 401 as the Tritons opened South Coast League play on Monday, Jan. 7.

The defending league champions maintained their form in a win at El Toro, 2-0.

Richards and senior Evan Dilbeck each scored in the second half, and Kowarsch and Harvey combined for the shutout.

San Clemente hosted Capistrano Valley on Wednesday, Jan. 9, but results were not available at press time. The Tritons are next in action against Mission Viejo at home on Monday, Jan. 14.

Weber Honored as National Player of the Year

The accolades keep coming for the boys soccer program as 2018 graduate Tristan Weber was named the 2018 National High School Player of the Year by the United Soccer Coaches Association.

Weber and other national honorees were recognized at the United Soccer Coaches national convention in Chicago from Jan. 9-13.

Weber, now a freshman at nationally ranked University of Portland, scored 15 goals and 22 assists as a senior for the Tritons last season. Weber was named South Coast League MVP and later the Gatorade California Boys Soccer Player of the Year.

Weber started in 10 games for Portland and tallied three assists in his first season up north.

San Clemente trailed throughout, and despite cutting a 16-point third-quarter deficit to a four-point fourth-quarter deficit, Aliso Niguel prevailed, 58-46 to set the tone for league play.

“I think we had some mental lapses,” San Clemente coach Kerri Husbands said. “When we played smart and poised, we were fine. (Aliso Niguel is) a great defensive team.”

The Wolverines hounded the Tritons for most of the night with a full-court press and tight defense. Aliso Niguel also got hot from the outside with five 3-pointers from Nicole Referente for 23 points.

In the third quarter with San Clemente down 16 coming out of a timeout, Ella Gardiner took over.

The 6-foot-1 junior got a head of steam, drove down the court and pushed the Tritons back into contention. Gardiner scored 10 points in a 14-2 run for San Clemente that brought the deficit to only four points.

After the run, San Clemente came up with only two more points while Aliso Niguel knocked down its free throws in a 10-2 run to end the game.

Despite the loss, the Tritons played right up to the league champions and showed the potential to build in league play.

“If we execute and play our game, we’ll be a solid match-up for anybody in our league,” Husbands said. “We’ve got to put together a full 32-minute game. Against good teams, we can’t have lapses where we lose focus and don’t follow through. When we are, we’re quite good.”

The San Clemente girls water polo team is back to its winning ways.

The Tritons (6-7) won their sixth of the last seven games and their 19th consecutive South Coast League game in a huge win over El Toro, 21-12, on Tuesday, Jan. 8.

San Clemente opens the Tournament of Champions in Santa Barbara against Cathedral Catholic of San Diego on Thursday, Jan. 10. The Tritons return to league play on Tuesday, Jan. 15 at home against Aliso Niguel.