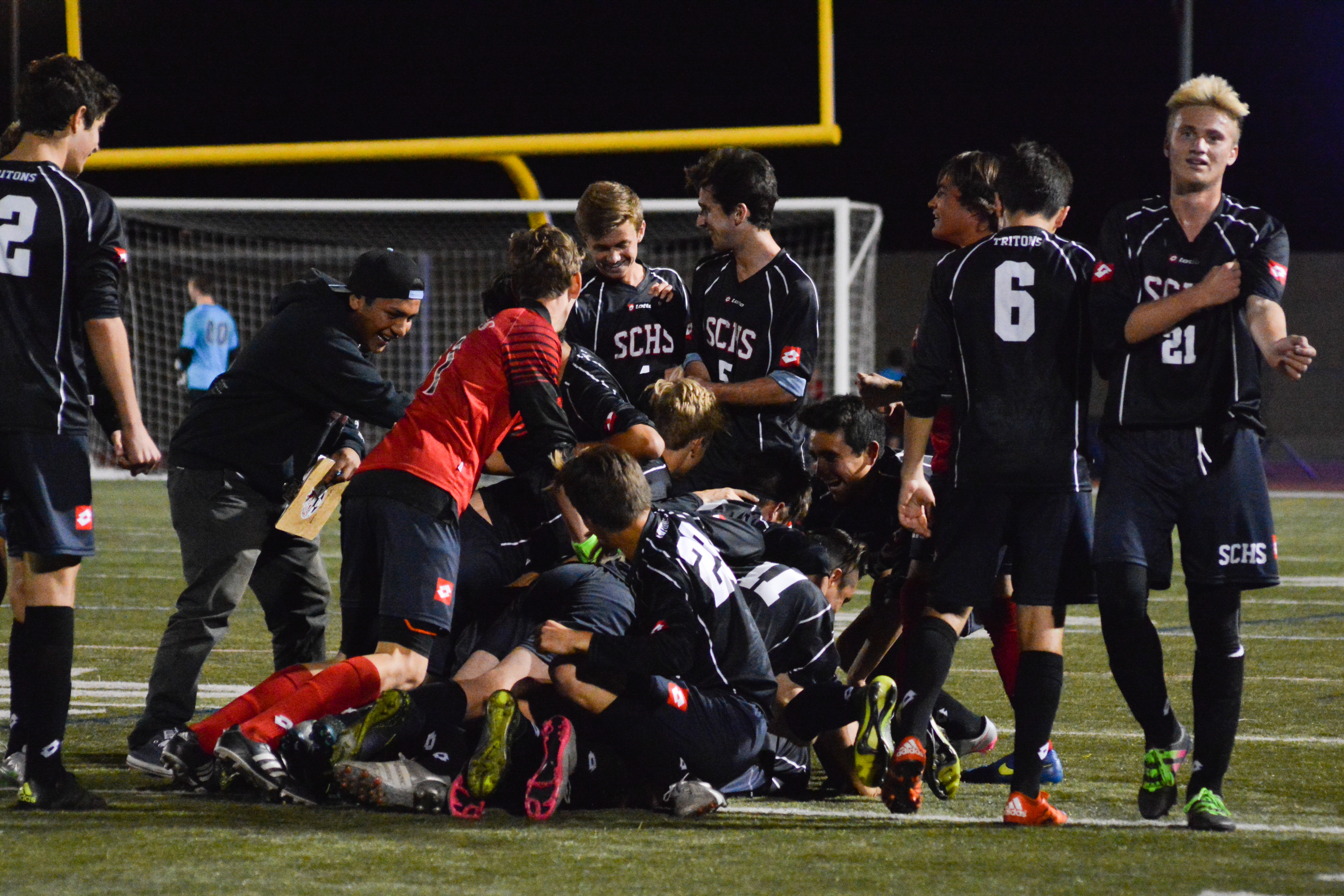 On Jan. 15 the San Clemente boys soccer team owned a 1-2 record in South Coast League play. Facing an uphill battle the rest of the way, the young Triton squad proved to be up to the task.

Over its next five games, San Clemente did not lose a match. The Tritons earned a draw and rattled off four wins down the stretch, including a 1-0 victory over El Toro on Feb. 11 that won the team the league title.

The Tritons edged El Toro in the final game of the season thanks to a second-half goal by Austin Ortiz. Ortiz was assisted on the goal by Nima Amjadi. San Clemente’s senior goalie Cameron Dickie made four saves in the victory.

The San Clemente defense seems to have found a groove late in the season. The Tritons have allowed only one goal in their last five games and have yet to yield a goal to an opponent since Feb. 3.

Peninsula (13-6-5, 5-2-3) finished runner-up in the Bay League behind a late-season push into the playoffs. Peninsula went 3-1-3 over its final seven games to secure second place in league.

Unlike most first-round playoff scenarios, San Clemente and Peninsula will enter Friday’s game with first-hand knowledge of each other. San Clemente defeated Peninsula 2-1 in the South Torrance Tournament on Dec. 21.

The winner of the San Clemente-Peninsula match will go on to play Servite in the second round. Servite, the No. 2 overall seed in Division 1, earned a first-round bye.

Girls Soccer Readies for First Round of Playoffs

After taking solo second place in the South Coast League, the San Clemente girls soccer team was awarded a first-round home playoff game in the CIF-SS Division 1 Championships. The Tritons will host St. Lucy’s on Feb. 18 at 5 p.m.

The Tritons (11-4-6, 3-1-2) enter the match against the Regents with plenty of momentum, having won three games in a row.

The San Clemente girls water polo team closed out its season with strong wins over league rivals Tesoro and Dana Hills, which secured a second-place finish in the South Coast League and a first-round home game in the playoffs.

A key to the Tritons success this season has been the stellar play of seniors Amber McCutcheon and Alaina Cousineau. McCutcheon, the team’s leading scorer, is averaging nearly five goals per contest while Cousineau has been dishing out a high volume of assists. Cousineau’s 82 assists this season is the second-highest total in Orange County. McCutcheon has scored 118 times this year, the fourth-highest mark in the county.

The winner of San Clemente-Newbury Park will play the winner of Schurr-St. Lucy’s in the second round on Feb. 20.

The season marked the first for the Tritons (10-15, 2-6) under new head coach Kerri Husbands.

Sophomore Nicole Dutch led the Tritons in several categories this season, including points per game (eight), rebounds (6.6) and blocks (2.5). Sophomore Kelsey Murphy led the team in assists per game (2.4) and senior Jessica Perry-Romero led the team by recording 2.3 steals per contest.

It has been a very busy couple of weeks for San Clemente High School’s soon-to-be senior quarterback Jack Sears. Sears, who guided the Tritons to an appearance in the CIF-SS Southwest Division Championship game this fall, has picked up seven collegiate offers this offseason.

Sears picked his first offer from the University of Utah in June of 2015. Since the end of the Tritons season, Dartmouth, Arizona State, Boston College, Tennessee, Oregon State and the University of Hawaii and Colorado have all extended offers to Sears, according to head coach Jaime Ortiz.