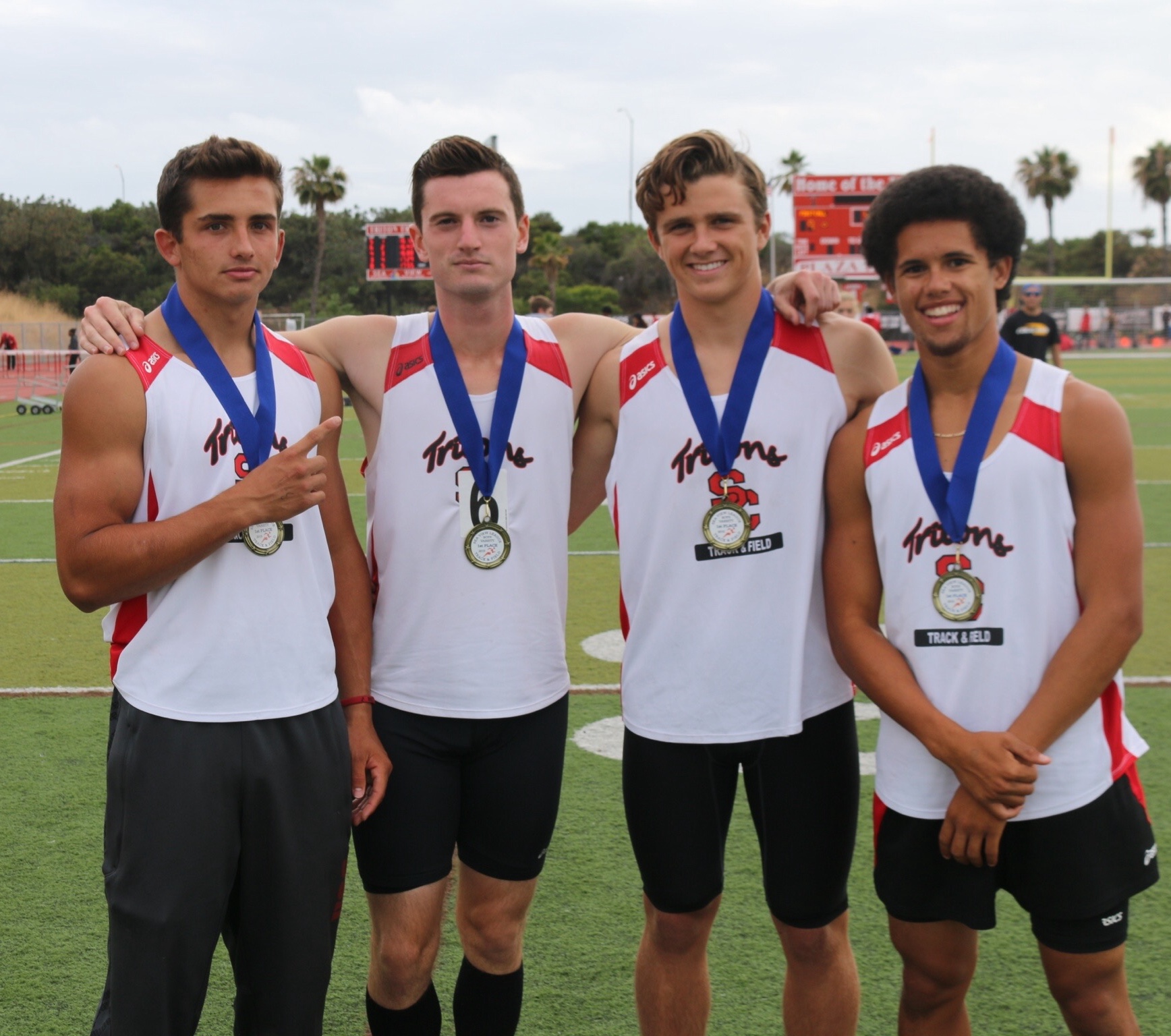 An all-around solid performance from both the running and field events helped the San Clemente boys track and field team take first place at the Sea View League finals on May 8. The girls team had several first-place finishers and finished third.

The boys 4×100-meter relay team made up of freshmen Austin Whitsett, Jackson Hinkle, Donavan Benton and senior Jesse Morrison won the event with a time of 43.98 seconds.

The Tritons also got crucial points from their field events.

The girls team took home third place and will send several representatives to the CIF-SS Prelims at Trabuco Hills High School on May 16.

Thrower Anna Gillis continued her standout season by placing first in both the discus and shot put events at league finals.

Senior Kelsey Carroll finished second and fifth in the 3200 and 1600-meter races, respectively. Marina McDonough placed third in the 400.

A 1-0 victory over San Juan Hills on May 12 ensured that the San Clemente baseball team would claim the outright Sea View League championship in 2015.

The Tritons, who won two games against second-place Mission Viejo last week to earn at least a share of the title for the first time since 2001, needed to win one of their two remaining games against the Stallions for the outright championship.

San Clemente was able to get the win on their first try, despite recording only one hit against Stallions’ starting pitcher Nicholas Hernandez.

It turned out one hit was all the home team needed to get the victory.

In the bottom of the sixth inning, San Clemente’s Tyler Ankrom reached on a fielding error, stole second base and came around to score when a ground ball hit by Will Tribucher was bobbled and thrown down the line by the Stallions defense.

“It’s kind of the way our season has gone. We obviously didn’t hit it our best but we got a little bit lucky at the end there,” Tritons head coach Dave Gellatly said. “We’re going to have to pick it up between now and next Friday if we expect to go deep in the playoffs.”

The Tritons’ Connor Sealey broke up Hernandez’s no-hit bid in the bottom of the fifth inning with a single to right field. Sealey advanced to second on the play on a fielding error and got to third following a sacrifice bunt by Dillon Riddle. With Sealey at third and one out, Hernandez got two easy groundouts to end the threat.

The Tritons will close out the season May 14 against the Stallions and will likely be a high seed in the CIF-SS Division 2 playoffs.

Tritons Lacrosse Falls to Sea Kings in Second Round of Playoffs

The San Clemente boys lacrosse team’s momentum was brought to a halt in the second round of U.S. Lacrosse Southern Division Championships on May 7 following a 12-5 loss to Corona del Mar.

The Tritons paved their way to the second round after defeating Tesoro 8-7 in a closely contested first-round matchup two days prior.

The Sea Kings’ Sherwin Gersten and Max Kline both recorded a hat trick in the win.

San Clemente ended the season with a 10-9 overall record and the South Coast League championship. Corona del Mar lost in the postseason semifinals to St. Margaret’s on May 10.

On May 5, the San Clemente softball team embarked on a four-game set of games against all four of their league opponents. So far, the Tritons have won three of the contests and will play a must-win game against Laguna Hills on May 13 that will decide the Sea View League championship.

The Tritons (18-5, 5-2) picked up wins over Tesoro, Trabuco Hills and San Juan Hills, respectively from May 5-11, setting the stage for the final game of the year against the Hawks.

The Tritons last two games, against Trabuco Hills and San Juan Hills, were both decided by one run.

In their only game against the Hawks earlier this season, the Tritons were handed a 6-5 loss.

Effort Up Front Turns the Tide in Volleyball Playoff Win

During the first set of their CIF-SS Division 1 first round playoff matchup against Redondo Union on May 12, the San Clemente boys volleyball team was struggling to find a rhythm, especially when attempting to block at the net.

The Seahawks outside hitters hit around, through and over the Tritons’ defensive front, securing a comfortable first-set victory.

But the first set would turn out to be a momentary glitch for the Tritons, as they regrouped their efforts up front and turned into the high-seeded playoff team they have looked like for most of the year, rallying to take the next three sets and the match, 19-25, 25-12, 25-19, 25-17.

San Clemente will travel to play Harvard Westlake in the second round of the playoffs on May 14.

The Tritons had four different players record blocks in the second set. Dominic Broussard recorded three blocks while Matt August, Brandon Hopper and Paul Castellana each had two. The blocking helped the Tritons grab quick points and reinvigorated their offense.

“We really honed in on pressing over and just really watching the hitters arm and just blocking the ball,” August said.

August led the way for the Tritons (25-6), collecting 11 kills, two aces and five blocks. Hopper had 10 kills and Broussard had six.

The Seahawks closed to within two points at 15-17 in the third set, but San Clemente went on a 6-0 run to pull away, capped off by consecutive August serving aces.

The 6-foot-8-inch Castellana and 6-foot-7-inch Hopper powered the team down the stretch in the fourth. The two combined for seven kills and two blocks as the Tritons convincingly closed out the match.

“We were a little out of synch (in the first set) and we were a little bit, as seeded teams sometimes do, get a little bit on their heels. We weren’t as aggressive as we should have been,” San Clemente head coach Ken Goldstone said. “I think I feel pretty confident that we were the better team, we just had to get going.”

Up next for the Tritons is Harvard Westlake, who upset ninth-seeded Santa Barbara in the first round and won a coin flip to determine home court advantage in the second round.