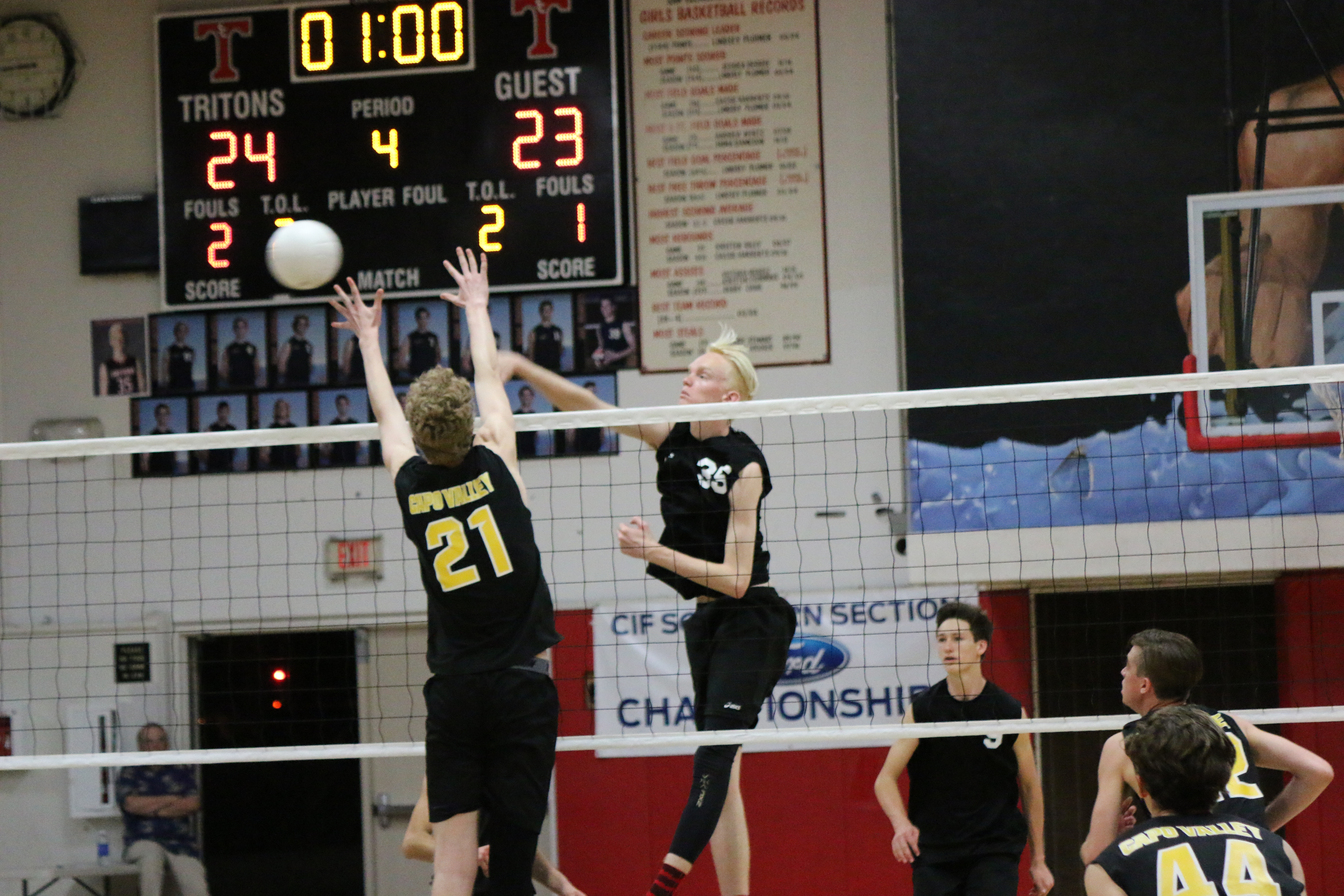 Boys Volleyball Bounces Back Against Barons

Following back-to-back losses to end its run at the Best of the West Tournament on March 19, the San Clemente boys volleyball team picked up a nonleague win over visiting Fountain Valley on March 22.

The Tritons lost their South Coast League opening match to Trabuco Hills on March 17 and will continue league play with a road match against Laguna Hills on March 24.

Looking to get Sea View League play started off on the right foot, the San Clemente baseball team turned to senior pitcher Andre Pallante on March 18.

Pallante, the hard-throwing senior ace of the Tritons’ pitching rotation, did not disappoint. Pallante threw 6 1/3 innings, allowing six hits and one walk while striking out six in an 8-1 road victory over Trabuco Hills.

The Tritons (6-1, 1-0 league) got to Trabuco Hills starter Jack Cornish in the second inning and plated six runs, which proved to be more than enough to seal the win.

Dominic Scarlata went 2 for 3 with two RBI and Jordan Fitzgerald went 2 for 4 and scored twice for San Clemente.

Pallante improved to 3-0 as a starter and owns a microscopic 0.34 ERA. Pallante has allowed only one earned run and has struck out 24 batters and issued only seven walks.

San Clemente will host Laguna Hills in a league game on March 24.

The San Clemente girls lacrosse team could not slow down St. Margaret’s during a nonleague game on March 22, as the Tartans stormed their way to a 16-10 victory.

The Dana Hills softball lineup came ready to swing the bat against rival San Clemente on March 22. The Dolphins strung together five hits, including a first-inning home run, to plate six runs in the opening frame and cruise to a 12-6 nonleague victory.

Despite a strong wind gusting in toward home plate, the Dolphins batters were able to hit three home runs. Starting pitcher Serafine Parrish belted a first-inning two-run home run and swatted one more in the fourth, and Carlee Russo hit a grand slam in the second.

San Clemente (5-5-1) was able to mount a comeback in the fourth inning and fifth innings and bring home six runs, but it was not enough.

San Clemente will host a nonleague game against San Juan Hills on March 24.

San Clemente swimmer Brad Prolo had a big showing at the Mission Viejo Invitational on March 19. The junior won both the 200 individual medley and the 100 breaststroke. In the breaststroke, Prolo nearly set a new meet record, missing out on it by one-tenths of a second, according to head coach Thomas Dollar.

The San Clemente boys and girls swim teams competed in a dual league meet against Dana Hills on March 22. The girls team defeated the Dolphins 98-72 and the boys team lost 101-69.

The San Clemente boys lacrosse team could not match perennial powerhouse Foothill’s firepower during a nonleague game on March 22. The Knights’ offense came alive in the final two quarters and vaulted the visitors to an 11-5 victory over the Tritons.

The game was close after two quarters, and Foothill took a slim 4-3 lead into the second half. But Foothill found its offensive footing in the third and fourth quarters, outscoring the Tritons 7-2 down the stretch to earn the win.

For the second consecutive week, the San Clemente boys and girls track and field teams played host to some of the area’s top programs. The annual Triton Invitational was held on March 19 at Thalassa Stadium and featured several San Clemente athletes earning podium finishes, including three event winners.

Julia Becker won the girls high jump after clearing the mark of 5-feet-2-inches.

Senior thrower Anna Gillis won the shot put with a throw of 38-07.50, nearly four feet longer than the next closest competitor. Gillis also placed second in the discus with a throw of 128-03.

The boys jumps team has had a strong start to the season and continued the trend at the Tritons’ home meet. Senior Bennett Secrest (6-0) won the high jump. Senior Christian Deering (40-04) finished second in the triple jump and junior Christopher Nicol (40-03) took third. Senior Aarron Nesbit (20-09) placed second in the long jump.

The Tritons will open Sea View League competition on the road against Laguna Hills on March 24.

The San Clemente boys tennis team ensured its South Coast League record would remain perfect so far this season with a convincing 16-2 victory over Capistrano Valley on March 17. The Tritons defeated Aliso Niguel 15-3 on March 15 to open league play.

In the match against the Cougars, San Clemente’s Michael Bott led the way in singles play. Bott swept all three of his matches. The Tritons’ doubles tandems of Jacob Greenberg and Lance Ding and Chris Torcaso and Tony Gregory swept all three of their matches.

San Clemente will host Trabuco Hills in a league match on March 24.