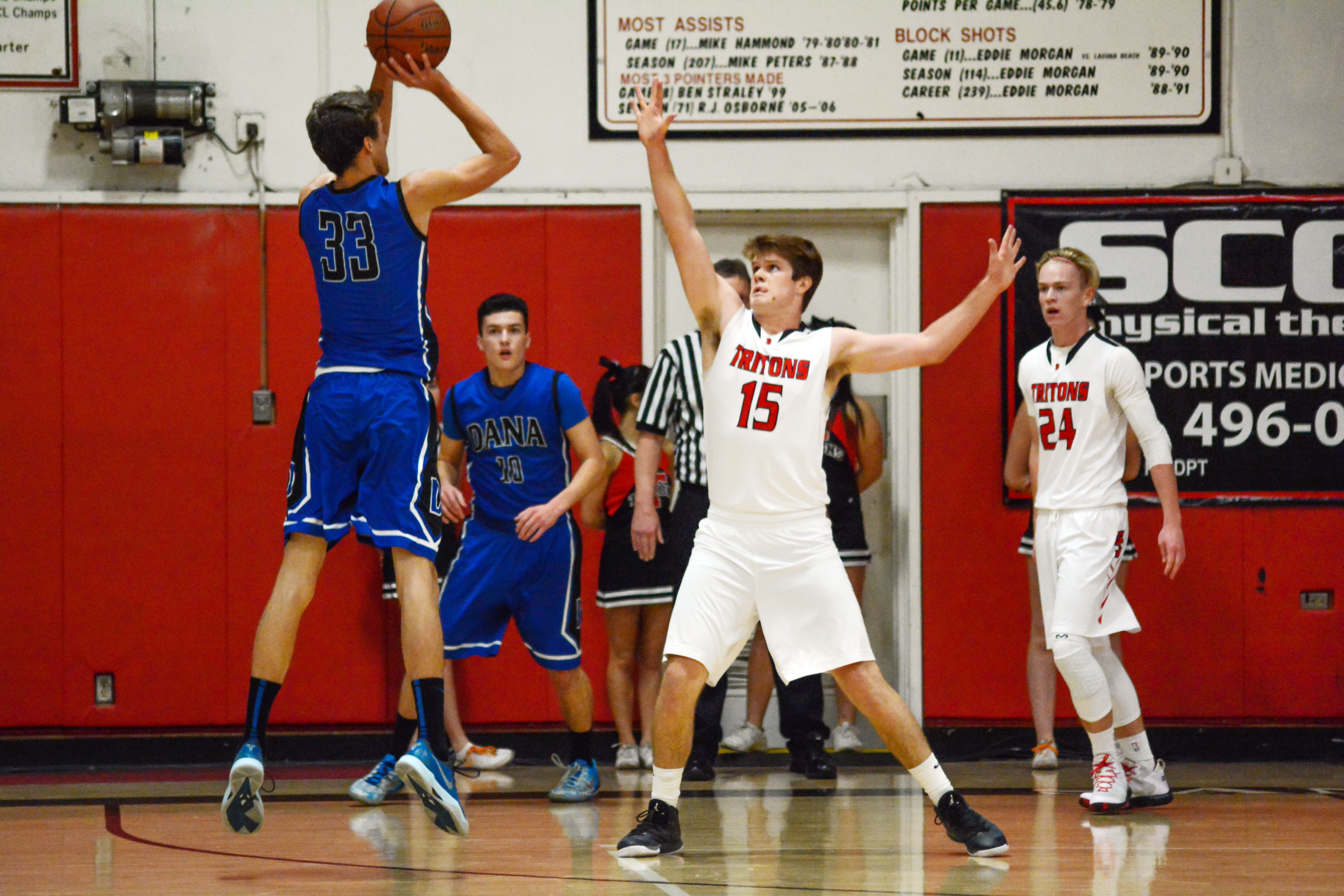 The formula for the San Clemente High School boys basketball team’s success has been fairly simple since hitting South Coast League play: When seniors Nick Crankshaw and Sam Darnold are recording double-doubles on the stat sheet, they tend to win.

Crankshaw and Darnold both put up double-double efforts on Jan. 23 in a wire to wire 58-43 win over rival Dana Hills in front of the Tritons home crowd. The win was San Clemente’s sixth in a row and moved their league record to a perfect 4-0.

Crankshaw filled up the stat sheet, notching 11 points, 13 rebounds, seven assists, four steals and one block. It was his third double-double of the season.

Darnold recorded his fourth straight double-double, and sixth of the year, by scoring 14 points and pulling in 10 rebounds.

The Tritons built an early lead and took a 27-13 advantage into halftime. The Dolphins (5-16) played just about even with the Tritons (13-7) in the second half but could not catch up.

San Clemente seems to have hit their stride since starting league play and have now made a full rotation playing all four South Coast members. The Tritons have outscored all four teams by a combined 254-197 margin, holding teams to just under a 50 points against average.

San Clemente will take a break from league play with a nonleague match against Tesoro on Jan. 29. They return for the final stretch of league play Feb. 4 with a home game against Aliso Niguel.

The San Clemente boys soccer team’s 10-match unbeaten streak came to an end on Jan. 23, when El Toro scored an early goal in an eventual 1-0 South Coast League victory over the Tritons.

The Chargers Daniel Parker scored the lone goal in the win.

The Tritons (12-5-3, 3-1-1 league) unbeaten streak dated back to Dec. 20 and featured eight consecutive wins and two draws. San Clemente remains in first place atop the league standings. They will travel to play Capistrano Valley on Jan. 29. San Clemente defeated the Cougars 2-1 back on Jan. 9.

The only blemish on the San Clemente girls basketball team’s league record to date is a 15-point loss to Tesoro, which happened on Jan. 8. Since then the Tritons have rattled off four straight wins, including three South Coast League victories, setting the stage for a pivotal rematch with the Titans on Jan. 29 that could decide the league championship.

Tesoro will enter the game with an undefeated 4-0 record while the Tritons come in at 3-1. Both teams will have three league games remaining following the tilt, giving this game title implications. The game is set to take place at Tesoro at 7 p.m.

The San Clemente girls soccer team played one of their most complete games of the season on Jan. 20 in a 3-0 shutout against rival Dana Hills. Not only did the win bring the San Clemente back to .500 in league play and give them a realistic shot at reaching the playoffs, but the Tritons executed well in all phases of the game.

They dominated possession, had three different players score goals, and limited the Dolphins to a handful of shots. After being hampered by injuries for most of the season, the Tritons have benefitted from healthy additions to the roster in recent weeks and, against the Dolphins, it all melded into a winning effort.

“We got a lot of girls back, which makes a big difference. Even the level of our practice rises when you get them back. Everyone gets more encouraged, more positive,” head coach Stacy Finnerty said following the win over Dana Hills. “We’re getting it, we’re getting it. The roles are being fulfilled in different ways, I think that’s important.”

Now the Tritons have had over one week to continue practicing with the new personnel and prepare for an away game against first-place Aliso Niguel on Jan. 29.

One goal was all the difference in a closely contested match between the San Clemente and Royal girls water polo squads on Jan. 22, which ended with the Tritons squeaking out an 11-10 victory.

San Clemente was able to take the one-goal advantage in the second quarter, when they outscored Royal 2-1 to take a 5-4 lead into the half.

The Tritons are scheduled to host Aliso Niguel in a nonleague game on Feb. 3.

Reppert will replace former coach Mike Hutnick, who guided the Tritons to a South Coast League title and an appearance in the Southern Section Division 1 semifinals in 2014.

Reppert has been a fixture in the Southern California high school lacrosse scene since 2003, serving as head coach at Santa Margarita and Beckman High School.

The Tritons enter the preseason as the No. 4 ranked team, according to www.MaxLaxOC.com.

“We’re extremely pleased to have Brad Reppert as our new boys lacrosse head coach. San Clemente High School boys lacrosse has been one of the top programs in all of Southern California and we are confident that coach Reppert will continue and even elevate that success both on and off the field,” Hamro said in a press release.