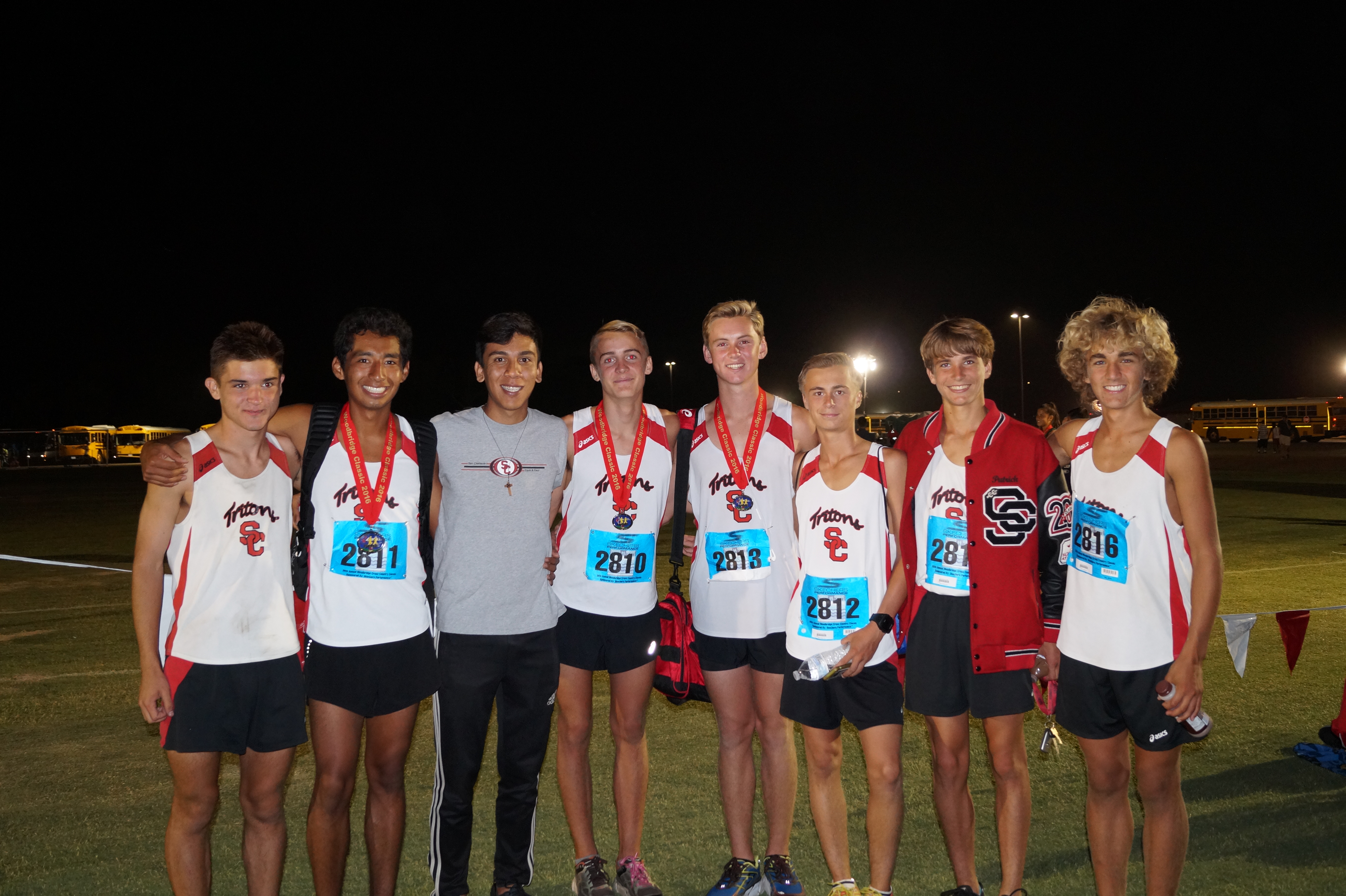 By Steve Breazeale and Victor Carno

Both the San Clemente girls and boys cross country teams had top-15 performances at the Woodbridge Invitational on Sept. 17. The race, which is normally one of the larger contests of the early cross country season, saw the Triton girls team place seventh in the Rated Race and the boys team take 14th in the Division 1 Varsity B Race.

Both teams will run at the historically fast Dana Hills Invitational course this weekend.–Steve Breazeale

San Clemente (4-7) had its share of chances in the match, but was unable to hold off the three-time defending CIF-SS Division 3A champion Warriors (6-3).

The first set started off in San Clemente’s favor, and the home team built up a five-point lead. Saddleback Valley Christian hung tough, rallying together several three-point runs to take the first game, 25-20.

The Warriors entered the second game with momentum and opened up a 5-1 lead, but a six-point San Clemente run ensured it would be a close set. Once again, SVC hit their stride late and were able to narrowly edge out the Tritons 25-21. Game three followed suit, as the Warriors walked away with a 25-15 match-clinching win.

“We gave up points, lost a few balls that we would normally have control of and failed to execute. All these little things add up to make it a difficult game,” San Clemente head coach Tom Beard said. “I’m proud the girls didn’t give up, but they are not going to like this loss.”

SVC coach Carmen Stratton believed the win over the Tritons was a big step forward for her squad, which is ranked sixth in the newly formed CIF-SS Division 3.

“We are a small school and wanted to come out and play big to show we aren’t intimidated by these bigger schools,” Stratton said.

The Tritons entered their match with the Warriors following a strong showing at the Durango Fall Classic in Las Vegas last week. The Tritons went 3-3 at the tournament, defeating some high-profile out-of-state programs. Now the Tritons will look to re-group for their South Coast League title defense. The Tritons will travel to play Aliso Niguel (11-2) on Sept. 22. –Victor Carno

Nick Hernandez rushed for 126 yards and three touchdowns to lead La Mirada past visiting San Clemente in a 43-14 nonleague victory on Sept. 16.

The Matadores’ (2-2) backs piled up 269 total rushing yards in the win, and the team held a comfortable 36-7 lead at halftime.

The Tritons were able to get their ground attack going as well. Junior running back Austin Whitsett tallied 92 yards on 14 carries and senior Brandon Reaves ran for 72 yards on just two carries. Senior quarterback Jack Sears ran for 64 yards and a touchdown. Sears also completed 14 of 30 passes for 123 yards and a score.

Sears’ lone touchdown pass went to Reaves in the first quarter to even the score with La Mirada 7-7. The Matadores, fueled by Hernandez’s efforts, went on to score 29 unanswered points to pull away.

La Mirada was the second CIF finalist the Tritons have played this season, but it will not be their last. The Tritons will host Palos Verdes (2-1) on Sept. 23. Palos Verdes appeared in the 2015 CIF-SS Western Division Championship game.

Palos Verdes will enter the game well-rested. The Sea Kings have not played since a 28-7 loss to Narbonne on Sept. 9.–SB

Tennis Team On a Roll

It’s been nearly a calendar month since the start of the season, and the San Clemente girls tennis team is undefeated. The Tritons (10-0) have got off to the best possible start in 2016, and are dominating their opponents.

Following wins over Laguna Beach, St. Margaret’s and Villa Park, the Tritons defeated Edison and Fountain Valley by a combined score of 31-5 this week.

San Clemente was scheduled to play a nonleague match against Mission Viejo on Sept. 20, but the match was called off due to weather. The Tritons will travel to play Aliso Niguel in a league match on Sept. 22.—SB

The San Clemente girls golf team will host 14 of the top programs in Southern California on Sept. 23 as part of the 12th annual Rainbow Sandals/Lady Triton Invitational at the San Clemente Municipal Golf Course.

Diamond Bar, Palm Desert, Corona del Mar and Dana Hills, all perennial CIF-SS teams, will be in the field. The tournament is a rare 18-hole event, and will kick off at 12:30 p.m.

The San Clemente boys water polo team hit a snag this week after opening its season with two big victories. The Tritons, who defeated Los Alamitos and Esperanza earlier this month, have lost two consecutive games since.

Carlsbad topped the Tritons 11-9 on Sept. 15, and Newport Harbor, the No. 8-ranked team in CIF-SS Division 1, defeated San Clemente 17-10 on Sept. 20. Connor Lindenstadt led Newport Harbor with six goals and goalie Max Sandberg made seven saves in the win.