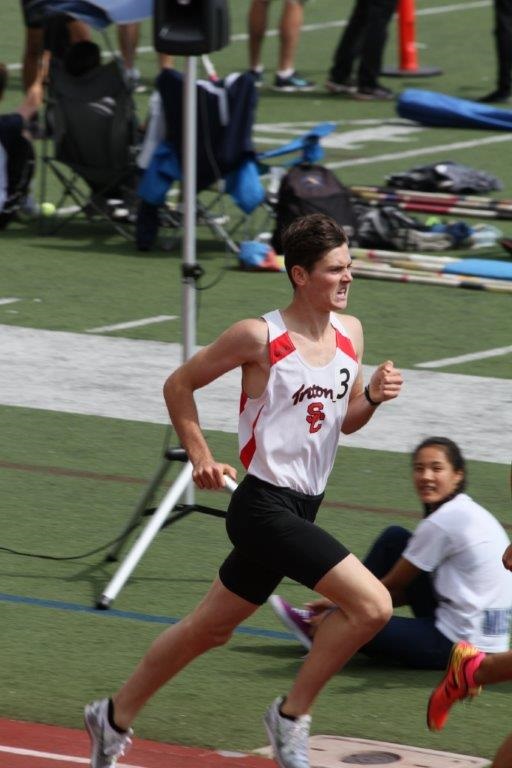 Junior Connor Dunne qualified for a spot in this weekend’s CIF State Track & Field Championships in Fresno by placing fourth in the 800-meter run at the CIF-SS Masters meet on May 29.

Dunne finished the event at the Masters meet in a new school-record time of 1:52.53. His time earned him the No. 6 overall seed in the 800 at the state meet.

Trailing by three runs heading into the seventh and final inning of the CIF-SS Division 2 semifinals, the San Clemente baseball team began to make a comeback.

RBI hits by Lucas Herbert and Will Tribucher cut into Chino Hills’ lead to make it 4-3, but the Huskies’ got a crucial strikeout with two on to end the game and the Tritons season.

At the plate, the Tritons were led by Tribucher, who went 3 for 4 at the plate, and Dylan Riddle, who hit a solo home run in the second inning to cut into Chino Hills’ lead at 2-1.

The Tritons paved their way to the semifinals by defeating Bonita 4-3 in extra innings in the quarterfinals on May 29.

San Clemente trailed 3-2 heading into the seventh inning until senior Tyler Ankrom hit a solo home run to right field that tied the game up and sent it into extra.

In the 10th inning, San Clemente’s Trevor Beard laid down a sacrifice bunt with two men on, causing Bonita pitcher Nick Johnson to sail a would-be force out throw at third base into the outfield, scoring Connor Sealey from second for a 4-3 walk-off win.

The 2015 season will go down as one of the most successful runs by a Triton team in recent memory.

San Clemente started off the year with a win at the Loara Tournament, where they defeated rival Dana Hills in the championship game.

They went on to win the prestigious National High School Invitational Tournament in Cary, N.C., emerging as the only undefeated squad in the elite 14-team field. They outdueled Mission Viejo, who will play in the CIF-SS Division 2 finals, to win a Sea View League title, the first for the school since 2001.

The San Clemente boys tennis team pulled off a first-round victory over Clovis West in the first round of the CIF State Championship Tournament on May 26.

The Tritons ran up against red-hot Harvard Westlake, a No. 6 seed that upset No. 1 Del Norte in the opening round, in the quarterfinals and lost, 5-2.

The Tritons went further than any other San Clemente team has in postseason play by finishing runner-up in the CIF-SS Division 2 finals and making it to the second round of the state tournament. They captured the South Coast League title for a fifth straight year and were undefeated in doing so for a third time.

Junior Jay Yeam has advanced to the round of 32 in the CIF-SS Individual Championships. Yeam, who earned a first-round bye as the South Coast League No. 1 seed, won three matches on May 28 to earn a bid into the round of 32, which begins on June 4 in Whittier.

Three early runs scored over the first two innings was all Bishop Amat needed in a 3-1 CIF-SS Division 3 quarterfinal victory over the San Clemente softball team on May 28.

Bishop Amat’s Rayne Barragan, Eryn Sustayta and Alyssa Barrera all drove in one run each in the win.

San Clemente earned berth in the quarterfinals by defeating Northwood and Warren in the first and second round of the playoffs, respectively.

For the first time in over 30 years, the San Clemente football program will bring back the Triton Bowl, which features a flag football game between senior and junior girls.

The game is set for 7 p.m. on June 5 at Thalassa Stadium and will feature about 100 students. All of the food and beverage sales from the event will be donated to the family of Saylor Voris, a former San Clemente High School student and cheerleader who died on April 14 after a 19-month battle with leukemia.