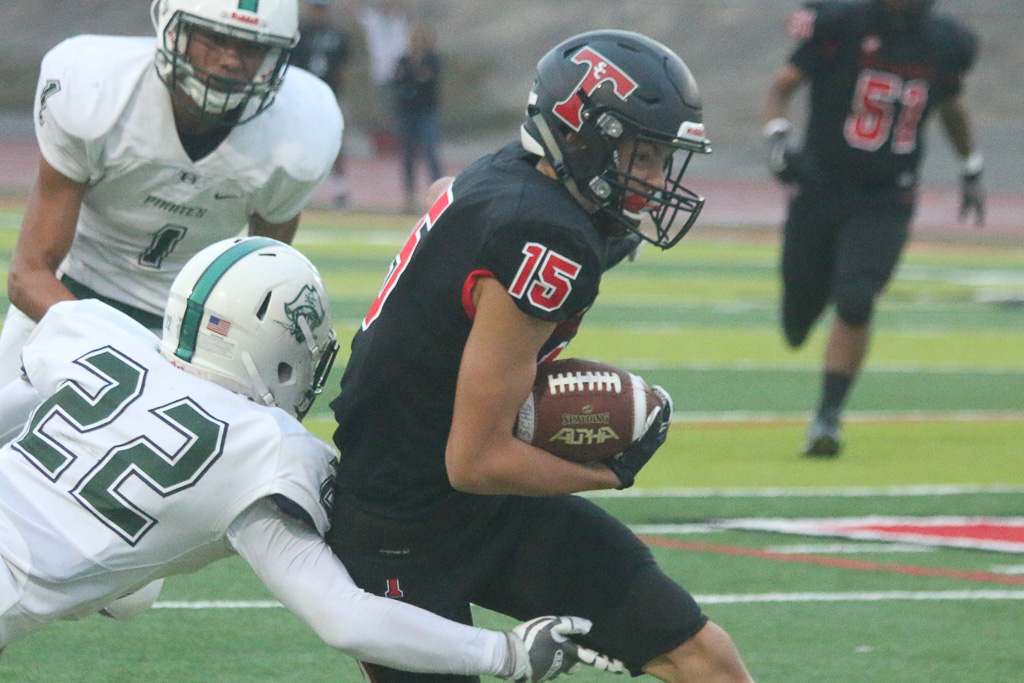 Triton Report: Football Aims to Get Back on Track against CdM

Football Aims to Get Back on Track against CdM

San Clemente football is in an unfamiliar position.

The Tritons (1-3) have lost three games in a row for the first time since 2013. San Clemente hasn’t lost three nonleague games since that 2-8 season in 2013 when the team lost its final eight games.

After a season-opening win over Oceanside, the Tritons lost to Torrey Pines and La Costa Canyon, No. 1 and No. 2 in San Diego County, respectively, in absolute thrillers by a combined score of five points.

Last week, San Clemente went back to the scene of its 2016 CIF-SS championship and faced yet another high-powered Murrieta Valley attack. The teams went back and forth all night before the Nighthawks pulled away in the final minute, 55-38.

The offense continues to be there, as Brendan Costello hit Jaydel Jenkins for three touchdowns and 166 yards and RJ Donaldson ran for two more touchdowns against Murrieta Valley. The Tritons are averaging 38 points per game.

Where San Clemente must improve is on defense, as the Tritons have allowed nearly 40 points per game on average.

After four out-of-county games to open their season, the Tritons can focus closer to home on Friday, Sept. 14, but the challenge doesn’t get any easier against Corona del Mar. From the beach towns to the mascots, San Clemente and the Sea Kings are similar in so many ways.

Corona del Mar (3-1) also features a top offense that is averaging over 32 points per game with quarterback Ethan Garbers and his top receiving target John Humphreys. Garber averages 269 yards per game in the air with 10 of his 13 touchdowns thrown to Humphreys.

San Clemente coach Jaime Ortiz said this was one of, if not the, toughest schedules in San Clemente history, and the Tritons will have to battle against Corona del Mar and Edison over the next two weeks to enter league play with an even record.

The Tritons (9-4, 1-0) were winless in the South Coast League last season but have entered the Sea View League with renewed confidence.

San Clemente played at Capistrano Valley on Tuesday, Sept. 11, but results were not available at press time. The Tritons host Laguna Hills on Thursday, Sept. 13.

The Tritons, No. 8 in the combined CIF-SS Division 1 and 2 poll, scored six goals in the second quarter to pull away and four in the fourth quarter to close down the win.

San Clemente hosts Dana Hills, No. 17 in the Division 1/2 poll, in the first of two huge league clashes on Tuesday, Sept. 18.