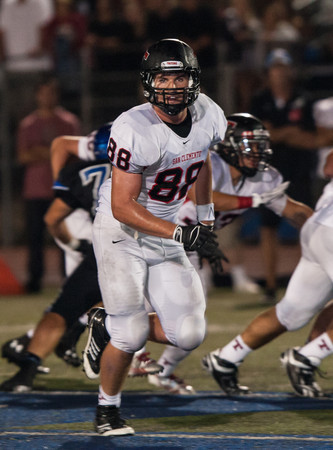 By Steve Breazeale and Jim Shilander

The Sailors opened the scoring on their first drive of the game, as Truxton took a Cole Norris pass and just reached over the pylon to score from 24 yards. After a Tritons punt pinned them at their own five-yard line, Newport Harbor used hard running and a few pass plays to move the ball to the Tritons three, where Chance Siemonsma took the ball in to make it 14-0.

The Tritons offense improved on its next drive, as Fotheringham hit Jason Wright and Collin Zines for first downs on the drive, to go along with several good runs by sophomore Vlad Dzhabiyev. However, following a sack on second down, an apparent mix-up on a route led to an interception by Truxton that was returned for a score.

San Clemente managed to pick itself up, however, as Dzhabiyev, Fotheringham and Wright moved the ball down inside the Sailor’s five-yard line before the close of the half. On third and goal from the one, Fotheringham found Cole Harlow in the end zone, and San Clemente closed the score to 21-7 just before half.

The teams exchanged short drives and punts in the third quarter, until a Sailor drive moved the ball inside the Tritons red zone, ultimately leading to a 26-yard field goal at the start of the fourth quarter. Following a roughing the punter penalty, Fotheringham hit three different receivers, including junior Jake Russell twice, the second for a 12-yard touchdown pass.

The next Sailors drive saw a more than 70-yard run wiped out by penalty, and the Sailors only managed to run a minute from the clock, potentially giving San Clemente new life. However, an interception on the drive’s second play led to a time consuming Newport drive that led to a field goal and a 27-13 lead. Any hope of a comeback was squelched on the second play of the Tritons ensuing drive, when Truxton returned his second interception of the day for a score, this time from 40 yards out.

San Clemente has lost three in a row and will travel to play defending CIF-SS Southwest Division champion Edison on October 4. –Jim Shilander

Tritons Girls Volleyball Preps for League Play
After pulling off an upset win over Capistrano Valley on September 19 the San Clemente girls volleyball team traveled to play in the Cougars own preseason tournament September 27-28 and went 2-1 over the two-day stretch. San Clemente defeated both Northwood and Chino Hills in two sets but fell to Rancho Cucamonga 2-1.

Dana Hills Girls Golf Gets Even With Tritons
When last the Dana Hills and San Clemente girls golf teams squared off, the Tritons got the better of their South Coast League rival. On October 1, Dana Hills evened things up with a narrow 212-213 win at Bella Collina Country Club.

Dolphins freshman Joan Soewondo shot a 38 (+2) to lead Dana Hills (8-6, 1-2) to a much needed victory. The Tritons (7-3, 3-2) still hold a lead over Dana Hills in the league standings and were set for a rematch with the Dolphins on October 3. Results were not available at press time.


Weekend Games Provide Drama for Tritons Boys Water Polo
The San Clemente boys water polo team had a wild weekend playing in the South Coast Tournament. The 32-team field played in four different venues from September 26-28 and three of the Tritons five games were decided by two points or less.

The Tritons opened up tournament play with an 8-7 sudden death loss to Huntington Beach on September 26. The Tritons capped off the tournament with a high-scoring 22-20 loss to University in overtime.

Recent transfer Andrew Papillion, along with junior attack Chase Hamming, fueled the Tritons offense over the course of the tournament. The two combined for 31 of the Tritons goals, including a 13-goal effort from Papillion against University. Hamming led the charge for the Tritons in a 9-8 win over Capistrano Valley on September 27.

The Tritons easily defeated Tesoro, 11-3, in the tournament and will play the Titans again in a nonleague match on October 7.

The rest of the Tritons team competed in the Dana Hills invitational. The freshman squad came in third place. Sophomore McKenna Brownell paced her age group with a 19:00 time.