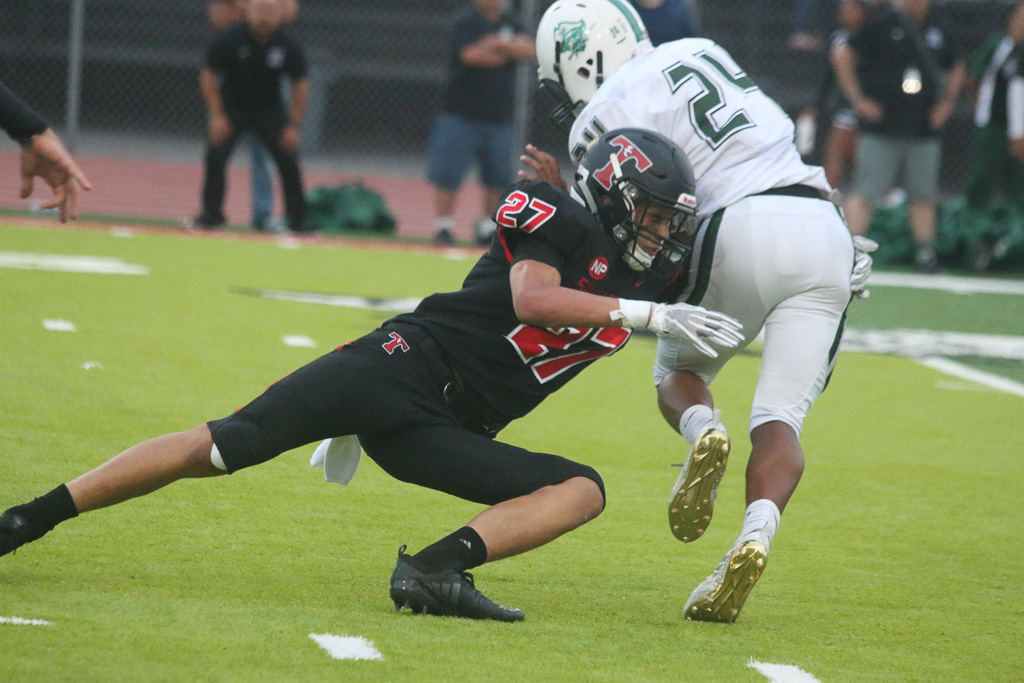 It happened again to the San Clemente football team.

The Tritons (1-4) lost their fourth consecutive game in dramatic fashion after leading going into or during the fourth quarter.

On Friday, Sept. 14, San Clemente held a five-point lead over Corona del Mar, 20-15, in the game’s final minute. With 50 seconds to play and no timeouts remaining for Corona del Mar, the Tritons elected to run a play on third down rather than taking a knee.

Corona del Mar stripped the ball away and recovered the fumble, and three plays later, the Sea Kings completed their 41-yard drive with a 24-yard touchdown pass for the one-point lead, 21-20, and the victory.

San Clemente gets right back to work on a short week as the Tritons travel up Pacific Coast Highway to Huntington Beach to take on the Edison Chargers on Thursday, Sept. 20.

The Tritons and Chargers have played two thrillers over the last two seasons with San Clemente winning both the 2016 Southern California Regional Bowl Game, 39-35, at Huntington Beach High School and the 2017 regular season match-up, 23-20, at home.

Edison is coming off a bye, but the Chargers will be without starting quarterback Patrick Angelovic, who suffered a broken collarbone against San Juan Hills on Sept. 7. Edison turns to sophomore Braeden Boyles who has only thrown four passes this season for two completions and 49 yards.

It’s a huge opportunity for San Clemente to get back on track with league play looming. If the Tritons were to enter the South Coast League with five losses, it would leave little to no margin for error in their hunt for a playoff spot.

San Clemente travels to Tesoro to open league on Sept. 28 and hosts El Toro on Oct. 5. The rest of the South Coast League has a combined record of 18-2.

The Triton cross country teams posted personal records across the board at the Woodbridge Classic in Norco on Saturday, Sept. 15.

Hana Catsimanes ran a personal-best 16:50.8 to finish 17th in the girls sweepstakes race. Her teammates combined to finish 15th as a team in the rated race. Cameron Green, Kelsi Yamano and Camryn Harrell all set personal records at the meet.

The boys side combined to finish eighth as a team in the rated race with a team spread of 32 seconds.

San Clemente will stay local on Saturday to compete in the Dana Hills Invitational.