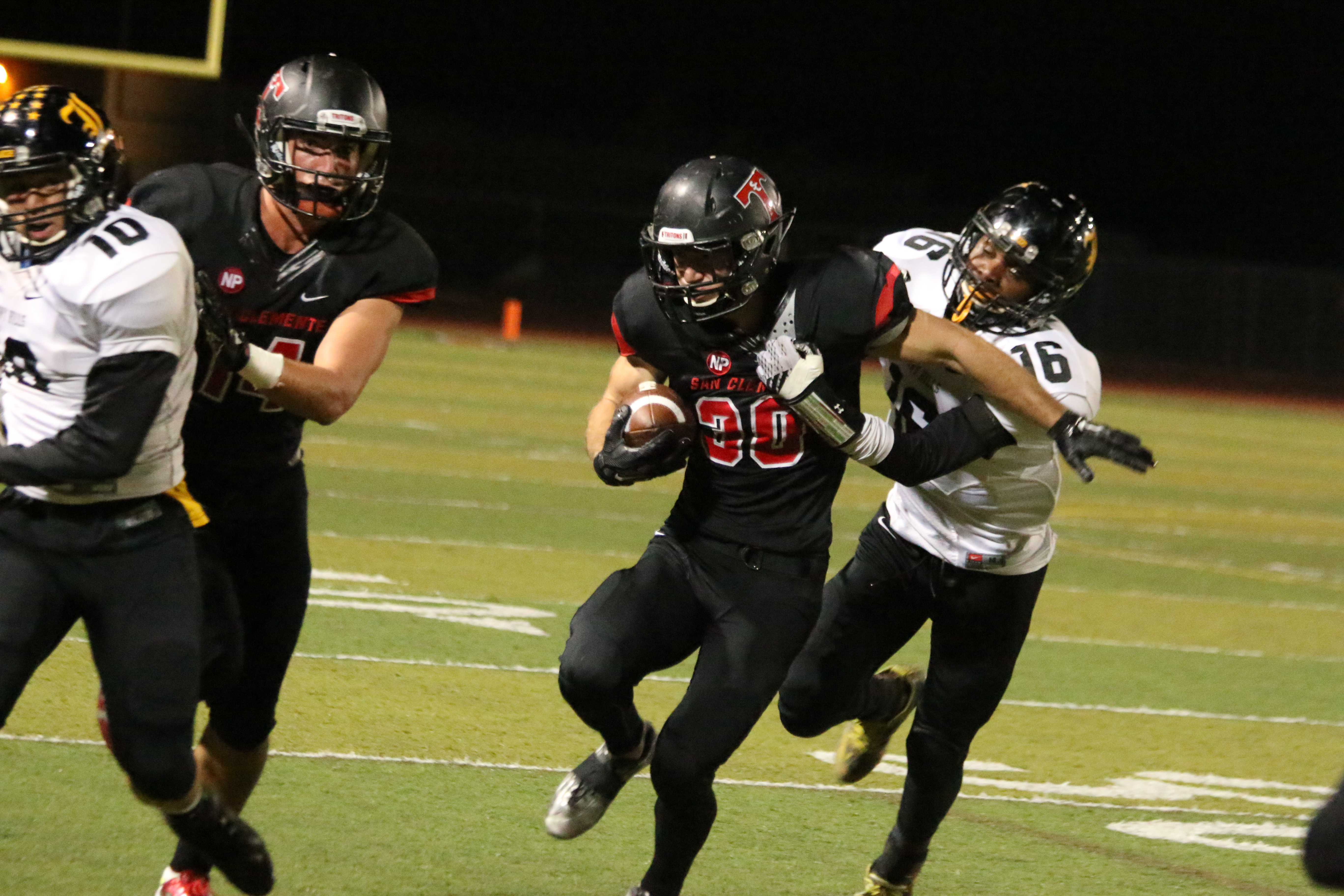 Football Team Shuts Down Lancers 52-0 in Playoff Opener, Heads to Second Round

The wing-T offense is not something one sees very often in the south Orange County high school football landscape. Sunny Hills brought the tricky run-oriented offense with them to Thalassa Stadium on Nov. 13 for a CIF-SS Southwest Division first round tilt against San Clemente, but it did not fool the Tritons.

San Clemente shut out the Lancers in a dominating 52-0 playoff-opening victory and punched their ticket into the second round.

Sunny Hills’ most productive drive of the game came on their first offensive series. Three different backs carried the ball downfield to the Tritons’ 32-yard line early in the first quarter and looked to be in a rhythm until San Clemente senior safety Andrew Frohner intercepted an errant pass by the Lancers quarterback Malcolm Dixon.

The Triton defense, which recorded its first shutout of the season, made sure the Lancers would not threaten the rest of the way. Sunny Hills could only scrape together 231 total yards of offense, all of which came on the ground.

“We had to put in a new defensive front this week to prepare for their wing-t, but I think we handled it well,” Frohner said. “It took us a little while to get going but once we started getting on top of blocks and getting over runners it was really good.”

Sunny Hills continued to run the ball, eating up a lot of the clock while keeping the Triton offense on the sidelines. But that did not matter much. San Clemente scored every time they had possession and took a 31-0 lead into the half.

Sears completed 15 of 19 passes for 230 yards and four touchdowns. Fotheringham had a game-high six catches for 53 yards and two scores. Fotheringham’s second touchdown was set up by another Frohner interception in the third quarter, which he returned 46 yards deep into Lancers territory.

Sears was on the same page with senior receiver Liam Eldridge, who caught four balls for 116 yards and a touchdown. The two linked up for a 48-yard catch and run touchdown pass early in the third quarter, which made it 38-0.

The Tritons next opponent, Sonora, will be the second run-dominated offense San Clemente will face in as many weeks.

Sonora possesses one of the more prolific running backs in Orange County in senior Jacob Fimbres, who scored four times in Sonora’s 42-13 shellacking of Tustin in the first round on Nov. 13. Fimbres rushed for 133 yards and three touchdowns and added three catches for 45 yards and another score in the Raiders win.

The winner of the San Clemente/Sonora game will play the winner of Corona Del Mar/Buena Park in the semifinals.

A list of seven names was published in last week’s San Clemente Times. Four new names have been added to the list.

Water Polo Falls to Damien in First Round of Playoffs

Damien High School, the No. 1 team out of the Baseline League, proved to be too much for the San Clemente boys water polo team on Nov. 14, as the Spartans moved past the Tritons 15-9 and into the second round of the CIF-SS Division 2 Championships.

San Clemente finished the season with an overall record of 11-17, including a 4-3 effort in the South Coast League. The Tritons placed third in league, which earned them a berth in the playoffs.

After surviving a five-set thriller in the first round of the CIF-SS Division 1AA Championships, the San Clemente girls volleyball teams playoff hopes were dashed by visiting Mater Dei in the second round on Nov. 12.

San Clemente was led by Cali Hoye, who had 14 kills.

The appearance in the second round capped off another successful season for the Tritons, who compiled a 16-13 overall record and won a share of the South Coast League title.

Dunne, who won the Sea View League individual title last week, looped the historic track in a time of 14:45.9.

Junior Carlos De Jesus placed 28th in the heat with a time of 15:16. Both Dunne and De Jesus were competing as individuals.