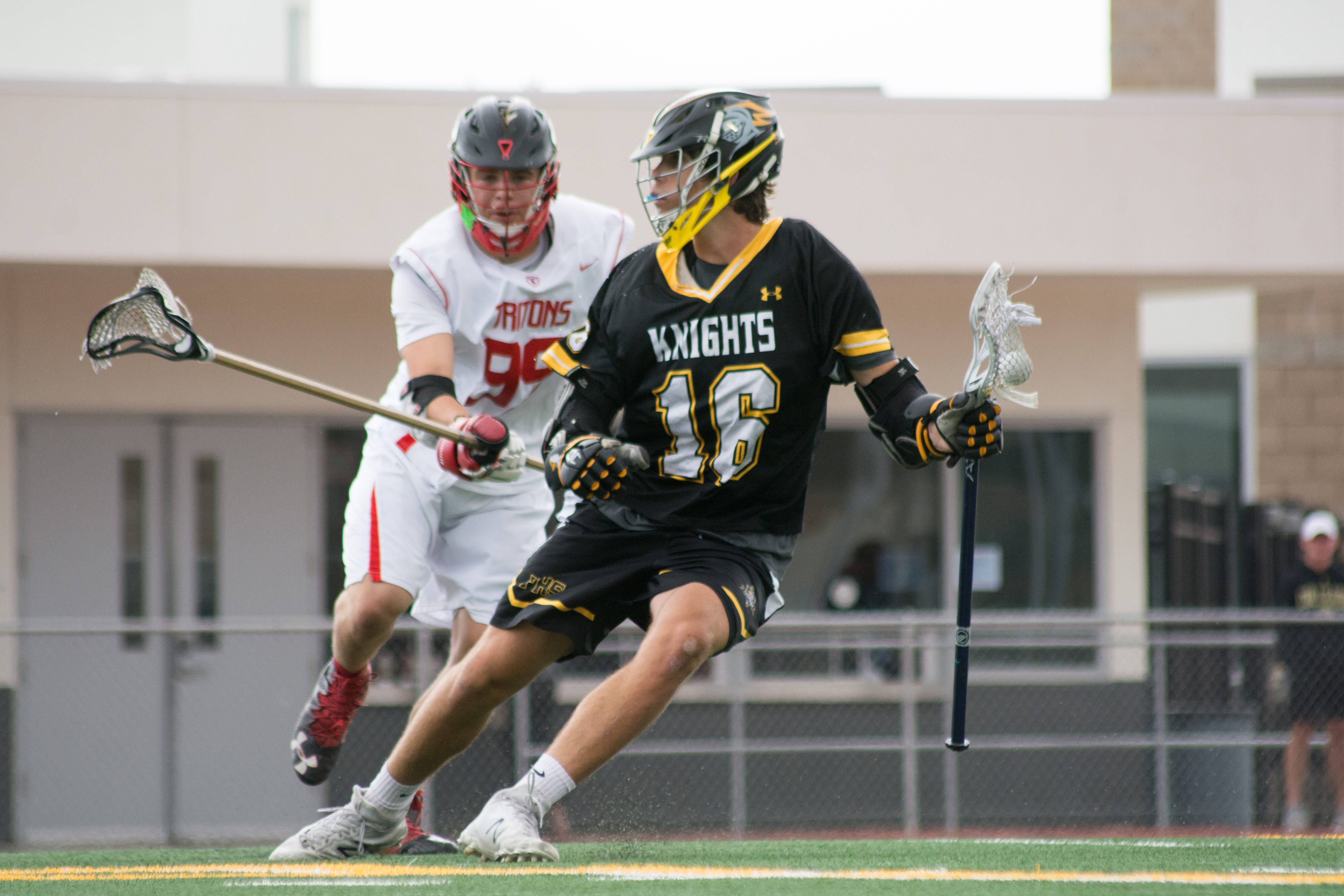 The San Clemente boys lacrosse team could not find an answer to Foothill’s momentum-changing attack during the second half of the U.S. Lacrosse Southern Section South Division semifinals on May 6.

The third-ranked Knights erased a three-goal deficit just before halftime and rattled off a large scoring run in the third quarter to upset the second-ranked Tritons and win, 14-9. Foothill was set to play top-seeded Corona Del Mar in the Orange County Championship game on May 10. Results were not available at press time.

Foothill’s Ellis Geis was the catalyst behind the Knights’ goal-scoring surge. The attack man scored his third goal of the game to cut San Clemente’s lead to 6-3 with six minutes to go before halftime, and scored the game-tying goal to knot the match at 6-6 with seconds to go before the break. Geis’ final goal of the first half came with San Clemente playing two men down due to penalties.

San Clemente took an 8-7 lead early in the third quarter when Matthew Keany scored on a feed from Nick Lemus, but that was the last time the Tritons would hold an advantage. Geis scored less than one minute later to tie it, which ignited a 4-0 Foothill run that gave the Knights an 11-9 lead they would not let go of.

San Clemente held all of the momentum early. The Tritons forced several Foothill turnovers in the first quarter, which turned into fast-break points. Back-to-back Keany goals stretched San Clemente’s lead to 5-2 early in the second quarter

Girls Lacrosse Falls to Tartans in Second Round

The St. Margaret’s girls lacrosse team jumped out to an early lead against San Clemente in the second round of the U.S. Lacrosse Southern Section South Division playoffs and did not let up.

The Tartans methodically broke down the Tritons’ zone defense and got production from up and down the lineup to secure a 15-9 victory. The Tartans fell to Mater Dei in the semifinals on May 6.

St. Margaret’s was able to build up a 5-1 lead early before the Tritons started chipping away. A Delainey Iles goal was followed by a goal by Madison Buckley to make it 5-3, but St. Margaret’s goalie Bella Ghanbari stood tall and made several key saves to halt the Tritons’ attack in the final minutes and stake her team to a 7-3 lead at the midway point.

The Tartans began to pull away in the second half.

A goal by sophomore Niki Miles capped off a 4-0 Tartans run to give the home team an 11-5 advantage and the Tritons could not recover. St. Margaret’s attack Maddie Barkate scored a game-high five goals and notched an assist

The loss ended a historic season for the Tritons. San Clemente finished with a program-best record of 15-4, and captured the South Coast League title for the first time in school history.

The South Coast League champion San Clemente boys tennis team was set to face Corona Del Mar in the first round of the CIF-SS Division 1 Championships on May 10. Results were not available at press time.

The Tritons’ doubles teams of Chris Torcaso and Corey Angeli and Caden Spencer and Michael Tilly ended up playing against each other in the South Coast League doubles championship on May 2. Torcaso and Angeli came away with the win. Both doubles teams will advance to the CIF-SS Individual Championship tournament on May 25.

Eight San Clemente girls track and field athletes qualified for the CIF-SS Track and Field Prelims on May 13 at Trabuco Hills High School. The Triton athletes qualified for postseason competition as a result of strong finishes at the South Coast League finals last week. As a team, the Tritons placed fourth in league.

Freshman distance runner Hana Catsimanes was crowned the 1,600-meter league champion after posting a time of 4:54.99 at league finals. Catsimanes’ time is currently the fifth-fastest mark in the event in the state, and was recorded as the second-fastest 1,600-meter time in school history.

The San Clemente boys swim team capped off a strong regular season with several standout performances at the Sea View League finals at Capistrano Valley High School on May 4.

San Clemente also qualified all three of its relay teams.