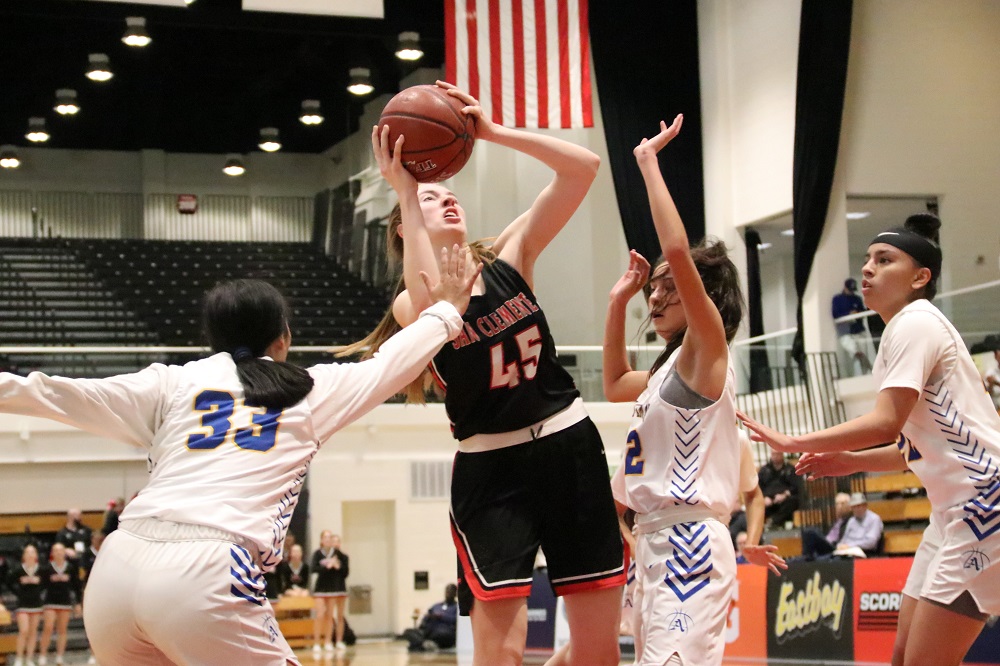 The San Clemente girls basketball team authored its most successful season in more than a decade, but the Tritons’ run came to an end on Saturday, March 7 in Santa Monica.

San Clemente matched Santa Monica High’s output in each of the second, third and fourth quarters, but the Tritons couldn’t overcome a first-quarter deficit, as the Vikings took the win, 47-39, in the CIF Southern California Regional Division II semifinals.

San Clemente finishes the season 29-5 and as South Coast League champions and CIF-SS Division 2A runner-up. The Tritons’ 29 wins are believed to be the highest single-season total in program history. San Clemente previously won 28 games in runs to CIF-SS championships in 2007 and 2001 and to the CIF-SS Final in 1998.

The regional semifinals marked the final game in the illustrious career of senior Ella Gardiner, who goes down as one of the top scorers in Triton history as one of only eight in program history with more than 1,000 career points. Gardiner scored 11 points and added eight rebounds, four assists, four blocks and three steals against Santa Monica, and in the quarterfinals, the Fairfield University-bound volleyball player scored 16 points.

After losing the CIF-SS Division 2A title game to Bishop Amat on Feb. 29, San Clemente earned two home games to open the regional playoffs. The Tritons defeated Arroyo Grande, 57-32, and Mira Costa, 51-47, to advance to the semifinals at Santa Monica.

San Clemente boys volleyball coach Ken Goldstone hit a milestone mark at the Best of the West Tournament in Poway on March 6-7.

Goldstone, in his 21st season at the helm of the Tritons boys volleyball team, won his 500th career match as the Tritons went 4-2 to claim ninth place in the tournament’s gold bracket playoffs.

The mark isn’t just a tribute of longevity for Goldstone, who considered coaching retirement after he retired from teaching two years ago. It’s a tribute to the level of excellence he’s presided over for the Tritons, who have won 14 league titles in Goldstone’s 21 seasons and finished first or second in the league in all 21 seasons.