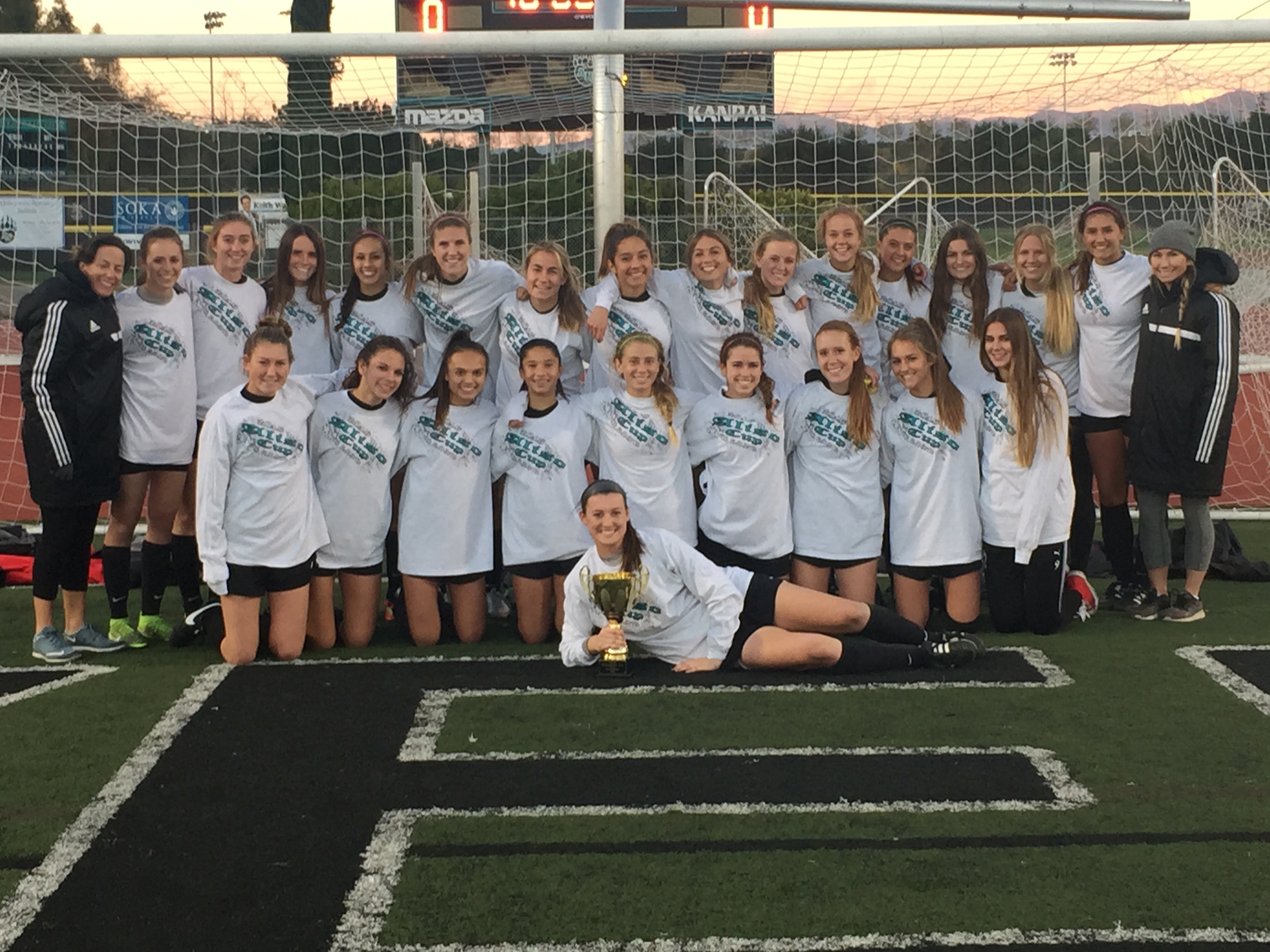 For in-game updates, scores, news and more for all of the San Clemente High School winter sports, follow us on Twitter @SouthOCsports.

After shutting out Bishop Amat for two full halves in the championship game of the Aliso Cup tournament’s President’s division on Dec. 14, San Clemente junior goalie Lauren Brzykcy saved her best for last.

The game between Bishop Amat and the San Clemente girls soccer team came down to penalty kicks, and Brzykcy was up to the task. The junior stopped three of five penalty kick attempts while the Tritons converted four of their strikes to seal a 1-0 win and claim the tournament hardware.

Brzykcy made eight saves in the championship game. The Triton defense allowed only two goals in four matches in the tournament.

San Clemente, No. 8 in the CIF-SS Division 1 rankings, tallied a 3-1 overall record at the high-profile event.

The Tritons (5-1-1) lost to Trabuco Hills 1-0 in the opening round, but bounced back with three consecutive wins over Long Beach Wilson, Chino Hills and Bishop Amat, respectively.

Against Long Beach Wilson on Dec. 12, Amanda Cruz, Gabi Drabkin and London Irwin each netted a second-half goal in a 3-0 victory.

The Tritons trailed Chino Hills 2-1 at halftime on Dec. 12, but rallied in the second half for a 3-2 victory. Chloe Deveze, Cassi Gohres and Kira Nemeth each scored for the Tritons in the win.

The Tritons opened their tournament run at the Mater Dei Premier Invitational on Dec. 16 with a 0-0 tie against Rosary Academy. San Clemente has tournament games scheduled against , Norco and Cathedral Catholic this week.

Following their tournament run, the Tritons will open South Coast League play with a pivotal match against Aliso Niguel, the reigning league champions and the No. 2 ranked team in Division 1.

The tournament featured eight teams that were all ranked inside the Top Drawer Soccer FAB 50 national rankings. Buchanan defeated Hamilton 3-0 in the tournament’s championship match.

The Tritons (2-3-2) opened their tournament bid against Watsonville from Northern California. Watsonville won the match 1-0 on a second-half goal. San Clemente senior goalie Cameron Dickie made seven saves. Watsonville went on to defeat Servite 1-0 in the consolation bracket.

San Clemente squared off against Loyola, the No. 6 ranked team in CIF-SS Division 1, in the team’s second match of the tournament and lost 1-0.

The Tritons drew 1-1 with Brophy Prep on Dec. 12. Brophy Prep is one of the top schools in Arizona and the No. 30 team in the nation, according to Top Drawer Soccer.

The Tritons moved up from No. 46 to No. 31 in the Top Drawer Soccer national rankings this week.

It’s safe to assume San Clemente senior guard Jake Cameron was in a groove against Woodbridge on Dec. 10. Cameron, a sharp-shooting guard, knocked down eight 3-pointers to tie a school record in a convincing 81-68 nonleague victory.

Cameron, who led the team with 24 points, hit two 3-point shots in the first half and erupted for five 3-pointers in the third quarter. The senior tacked on one more shot from beyond the arc in the fourth quarter to tie the school record of eight.

The Tritons defense allowed a season-best 35 points in a 69-35 victory over Oceanside on Dec. 12.

San Clemente (4-2) holds a winning record despite playing with a less than full roster. Starting forward  Cole Fotheringham and bench players Isaac Rex and Chris Kane all missed considerable time at the start of the basketball season while playing with the football team. James Paterson, another starting forward, has also missed multiple games.

Despite the thin roster, the Tritons have found success in the early going. San Clemente went 2-2 at the Diablo Inferno Tournament at Mission Viejo High School from Nov. 30-Dec. 5 and played in the championship game against JSerra. JSerra won the championship match 71-70 on a go-ahead tip-in basket with seven seconds remaining.

The Triton offense has been efficient through six games and is shooting at a 47 percent clip from the field.

San Clemente defeated Irvine 66-29 in the opening game of the Irvine World News Tournament on Dec. 15. The Tritons held a third-quarter lead against Edison, the fourth ranked team in CIF-SS Division 2AA, on Dec. 16 but were outscored down the stretch in a 78-73 defeat.

The San Clemente girls basketball team started its season off with a 2-2 run through the South Coast Classic tournament Nov. 30-Dec. 5. The Tritons picked up wins over Fountain Valley and Capistrano Valley and lost to tournament host University and El Dorado.

Since the tournament appearance, the Tritons (2-5) have dropped three straight games to Northwood, Orange Lutheran and Warren, respectively.

San Clemente will look to get back on the winning track with a road trip north to play in the Santa Barbara Tournament of Champions Dec. 19-23.

Through seven games, sophomore Nicole Dutch leads the team in scoring (7.1 points per game) and rebounding (6.7). Dutch is also averaging 3.9 blocks per contest.

San Clemente girls water polo senior Amber McCutcheon’s game-high four goals were not enough to turn the tide against Mater Dei on Dec. 15. Seven different players recorded goals for the Monarchs as they moved past the Tritons 12-8 in a nonleague match.

It was a contest that pitted two top-10 teams in their respective CIF-SS Divisions against one another. The Monarchs are ranked eighth in Division 1 and the Tritons are No. 2 in Division 2.

The Tritons will play Rosary at Santa Margarita High School on Dec. 19.