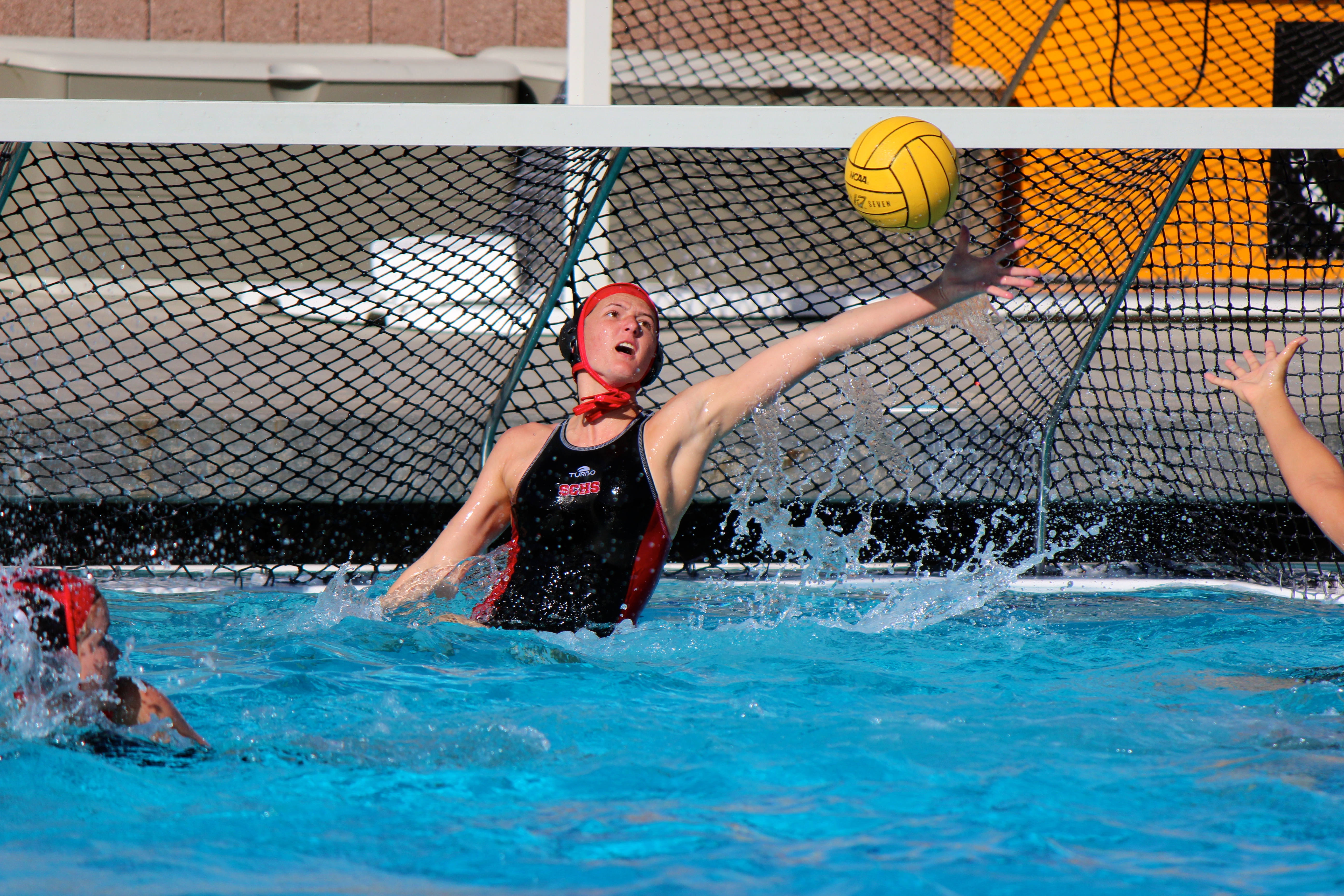 San Clemente was scheduled to play in the Division 2 semifinals against top-seeded Murrieta Valley on Feb. 24. Results were not available at press time.

San Clemente got production from up and down its lineup in a 19-5 victory over Newbury Park in the first round on Feb. 18. Senior Alaina Cousineau, who is committed to play at USC, scored a game-high four goals and was one of 10 Tritons who recorded a goal. Tera Richardson and Alison Echelberger each scored three goals.

The Tritons kept the momentum going in an 11-7 win over Schurr in the quarterfinals on Feb. 20.

Murrieta Valley entered its match with the Tritons riding a goal-scoring streak of its own. Murrieta Valley, the No. 1-ranked team in Division 2, outscored its first two playoff opponents by a combined 34-14 margin.

Eagles Get Late Goal in 1-0 Win Over Tritons

Santa Margarita’s Taylor Gathers netted a decisive, late goal against San Clemente in the second round of the CIF-SS Division 1 Championships on Feb. 23 to secure a 1-0 win for the Eagles.

After a fairly uneventful first half, both sides produced multiple chances over the final 40 minutes. In the 75th minute, the Eagles’ Gwyn George found Gathers, who converted on her shot attempt for the lone goal.

San Clemente’s Ellie Winklemann, who scored twice in the Tritons’ first-round victory over St. Lucy’s, nearly put the Tritons out in front with 15 minutes remaining, but her shot clanged off the crossbar. Tritons’ goalie Lauren Brzykcy made six saves. –Kevin Dahlgren contributed to this report

Boys Hoops’ Historic Run Ends in Second Round of Playoffs

The school record-setting San Clemente boys basketball team’s season came to an end in the second round of the CIF-SS Division 1AA Championships on Feb. 19, as the Tritons lost to Downey 55-49 on the road.

The Downey shooters turned in a solid performance from beyond the arc, knocking down 11 3-pointers in the victory. The Vikings were led by Tyler Dees, who scored a game-high 22 points and made five 3-pointers.

Downey was able to take an early lead and hold on for most of the game. The Vikings led San Clemente 29-22 at the half.

San Clemente punched its way into the second round after defeating Fountain Valley 61-51 at home in the opening round. The Tritons built up a huge 19-point lead midway through the contest and survived a second-half Fountain Valley scoring barrage to seal the win.

The Tritons’ season turned out to be one for the record books. San Clemente set a new school record by winning 21 games and claiming the South Coast League title outright for a second consecutive season. It was the first time in program history a team won back-to-back league titles.

Peninsula Takes Advantage of Opportunities in Win Over Tritons

There weren’t many scoring chances for the Peninsula boys soccer team in a CIF-SS Division 1 first round matchup with San Clemente on Feb. 19. But when the time came for the ball to be put away, Peninsula capitalized.

Peninsula scored twice in the opening 40 minutes against the Tritons and emerged with a 2-1 victory.

San Clemente outshot the visitors 14-5 and held Peninsula to just one shot in the second half, but the Tritons had only one goal to show for their effort.

Peninsula jumped out to a 1-0 lead nine minutes in when a San Clemente defensive clearance landed perfectly at the feet of Peninsula’s Adam Reece. Reece took one dribble from just outside the Tritons’ box and launched a hard shot into the top right corner of the goal. It was the first time Peninsula took the ball deep into the Tritons’ territory in the contest.

San Clemente had multiple, quality scoring chances in the first half, but Peninsula goalie Charlie Nasrallah denied several of them. Nasrallah made a diving fingertip save on San Clemente’s Nima Amjadi in the 22nd minute in what looked like a sure-fire goal.

San Clemente senior Barrett Croft nearly scored an equalizing goal 11 minutes later on a breakaway chance, but his shot clanged off the post and Peninsula was able to clear the ball away.

Peninsula’s Reece Tretheway beat the San Clemente back line after corralling a pass from the outside and sliding a goal in just before the halftime whistle to put Peninsula up 2-0.

The Tritons went 10-10-5 on the season and won the South Coast League title.