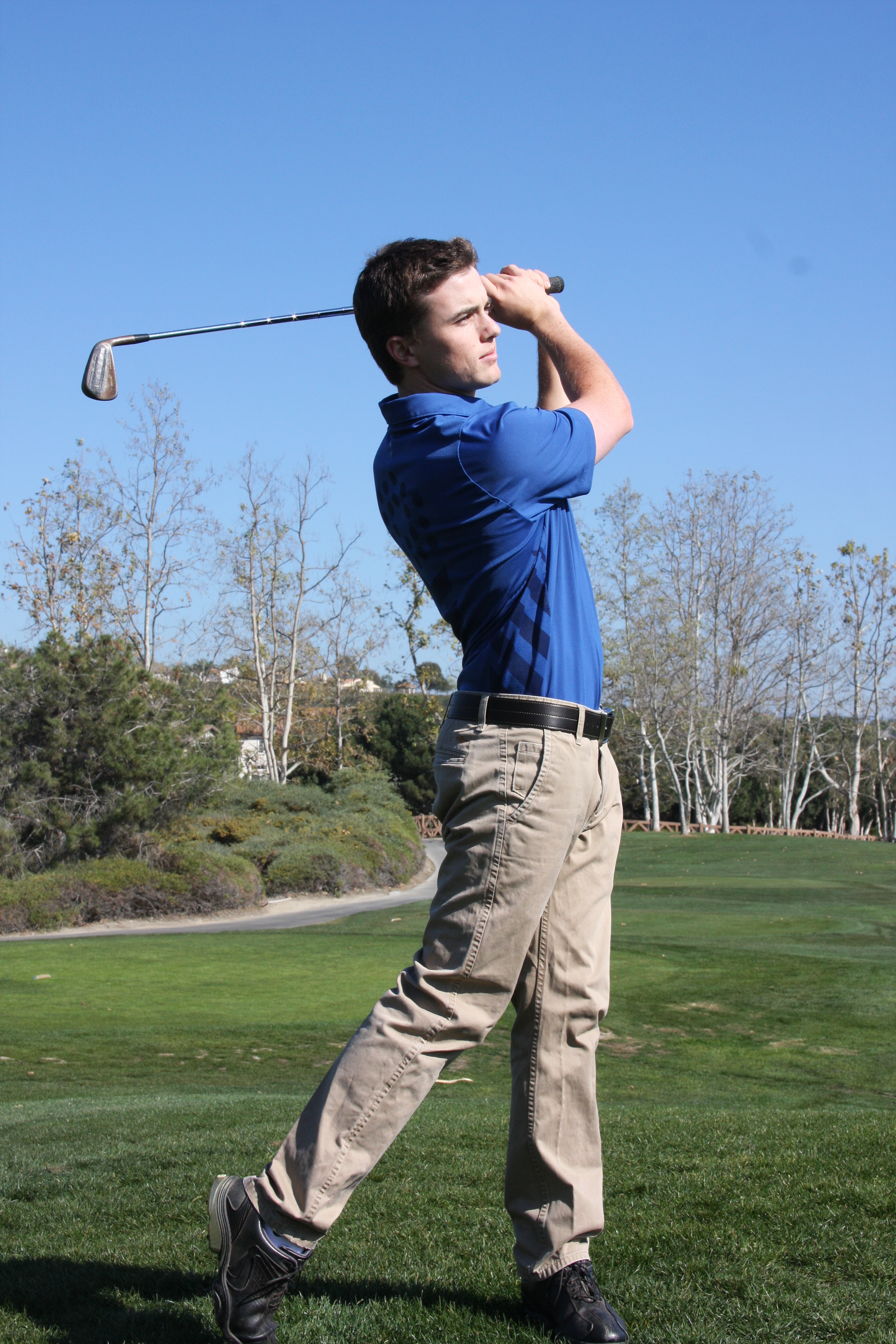 One big shot after another propelled the San Clemente boys golf team past the rest of the field at the Estancia Tournament on April 20, culminating in a winning score of 80 points.

As opposed to most golf tournament scoring formats in which the lowest golfer, or team, relative to par wins, the Estancia Tournament uses a Stableford system, which awards points to certain scores on holes. That places a premium on making pars, birdies or, in the Tritons case, even lower scores.

The Tritons benefitted from a huge point-getting performance from senior Sammy Schwartz, who knocked in a hole-in-one on the par-3 sixth hole at Mesa Verde Country Club to earn 10 points. Schwartz led the team with 26 total points and shot a 71 (E).

Junior Austin Briggs had an eagle on his card and Jan Prerovsky contributed 21 points. Shane Barreira rounded out the group.

“The guys just got hot and fed off of one another’s play,” head coach Mike Hurlbut said. “We have never finished higher than third in this event … We had discussed how poorly we’ve done over the years. The guys decided to just dominate, which they did.”

San Clemente finished 11 points clear of second-place Sunny Hills and was one point short of tying the tournament points record of 81.

Since being swept by rival Dana Hills on April 2, the San Clemente boys volleyball team made short work of their next three opponents.

Another three-set sweep of Trabuco Hills followed on April 21.

The Tritons will host El Toro in a nonleague match April 23.

Marhsall had a stellar senior season to close out his high school career, placing fifth at the State of California championships and ended the year with a 48-9 overall record, including 38 pins. He was voted the South Coast League wrestler of the year.

Marshall wrestled all four years for the Tritons and holds the program mark for most wins with 160.

Despite surrendering eight hits and one walk, San Clemente junior pitcher Andre Pallante was able to minimize the damage in his start against Trabuco Hills on April 15, pitching six innings in a 4-2 win.

It was the first of two wins in a row for San Clemente (17-4, 5-1 league), who sit in second place in the Sea View League standings.

In the second game of the series on April 17, the Tritons came back from a one-run deficit in the sixth inning by erupting for three runs and a 4-2 lead. Senior Will Tribucher pitched 6 2/3 innings, allowing five hits and one walk while striking out five. Tribucher improved his record to a perfect 4-0 on the season and owns a sparkling 1.47 ERA.

Senior Dylan Riddle went 3-7 with three RBI and one run scored over the two-game set.

San Clemente was set to play a nonleague double header against Dana Hills on April 22 at Saddleback College. Results were not available at press time.

At 3-2 in South Coast League play, the San Clemente boys lacrosse team will have to win out and hope for Trabuco Hills to stumble across the finish line if the Tritons are to retain their league championship.

The loss leaves the Tritons in second place with three games left on the schedule. The first tilt will be at home against Aliso Niguel on April 23. The Wolverines (8-6, 3-3) have proven to be a tough out this season and defeated San Clemente 11-7 back on March 26.

San Clemente will close out the season with games against Capistrano Valley and third-place Tesoro (5-9, 4-3).