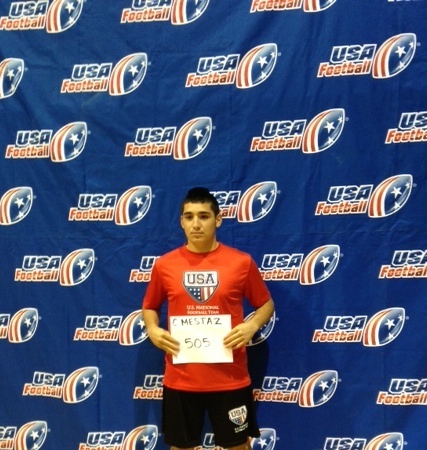 For in-game updates, news and more for all the San Clemente spring sports programs, follow us on Twitter @SouthOCsports.

The San Clemente football program is preparing for another spring season and offseason practice is set to being on May 12 at Thalassa Stadium.

There have been some storylines progressing since the last time the Tritons took the field in November, ending their season with a 2-8 overall record and an 0-4 run through South Coast League play.

Sam Darnold is more than just an exciting quarterback to watch in the area. The 6-foot-5-inch dynamo is also a hot college recruiting prospect.

Darnold was offered a scholarship by Utah last season and picked up a second official offer from the University of Nevada, Reno on March 1. Last week, Darnold met with and threw for representatives from Arizona, Fresno State, Penn State and the Tennessee. Northwestern, Vanderbilt, Wake Forest and UC Berkeley were set to meet with him on April 30, according to head coach Jaime Ortiz.

Darnold’s progression and health will be at the forefront of his senior campaign. His junior season was cut short by a fractured foot in a game against rival Dana Hills just three games into the season. Darnold, an accomplished basketball player, broke his hand playing on the hardwood months later but has fully recovered, according to Ortiz.

USA Football is recognized by the NCAA and NFL as the sport’s national development governing body and is in the process of putting together youth teams, ranging from U14-U18 age divisions, to compete on the international stage.

Mestaz earned a spot at the games by excelling during a USA Football regional development camp, which was the first stage of the tryouts.

Mestaz will travel to Occidental College in Los Angeles to receive instruction from current college coaches and former NFL coaches and players over the five-day span. After participating in 7 on 7 passing league tournaments and scrimmages, players will be selected to play in games at the end of the week.

A 13-4 road victory over El Toro in a South Coast League matchup on April 29 secured the league title for the San Clemente boys lacrosse team.

San Clemente will have a chance to finish league play undefeated on May 1 when they travel to play Mission Viejo in the final game of their regular season.

The San Clemente boys and girls track and field teams competed at the Orange County Championships at Mission Viejo High School on April 25.

The Tritons throwing team made a strong statement at the county-wide event, highlighted by a one-two finish in the boys discus. Senior Kelsey Benoit took first place with a throw of 185-01 and teammate Rocky Fenton’s second-place throw measured 180-10. Benoit also took second in the shot put (60-02) and was one of only two competitors to clear the 60-foot mark.

Arik Nesbit finished sixth in the long jump and third in the triple jump.

The Tritons finished in fifth place with 29 total points.

Senior Melissa Eisele had a strong showing, placing third in the 1600-meter run and second in the 3200. The Tritons distance runners packed together in the 1600, as Kelsey Carroll and Gracie Georgi finished sixth and ninth, respectively, in the event.

Jessica Erickson came in fourth in the 400 and Madison Chronister finished fifth in the discus.

Both teams will compete in the South Coast League prelims on May 6.

The potent San Clemente baseball offense was slowed to a crawl in the second game of a two-game series against San Juan Hills on April 26, resulting in a 1-0 loss.

The Tritons bats had produced 27 runs in their previous three contests but were blanked by Stallions senior starting pitcher Ryan Linehan, who held San Clemente to four hits over 4 1/3 innings.

San Juan Hills senior Jacob Duhey knocked in what turned out to be the winning run in the second inning.

Following a nonleague double header against Tesoro at Saddleback College on April 30, the Tritons will have their hands full down the home stretch. San Clemente will play two games against first-place Dana Hills on May 7 and May 9 before finishing out their season with two games against Aliso Niguel.