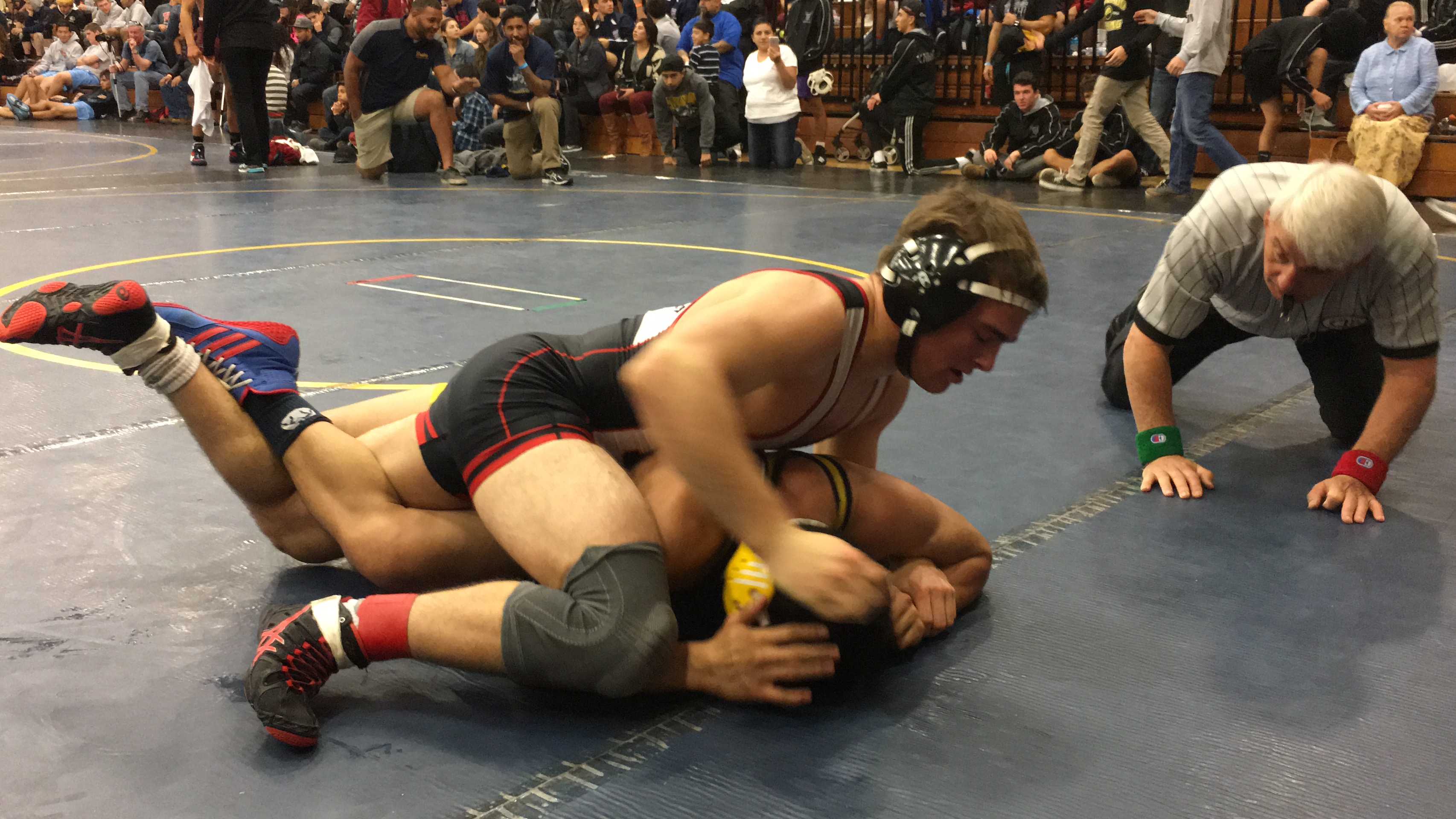 Meisinger, Marshall Dominant on the Mats for Triton Wrestling Team

San Clemente wrestlers Tyler Meisinger and Kyle Marshall had a December to remember and one, according to head coach Mark Calentino, which will stand out in the school record books.

Meisinger won five tournament championships in one calendar month and was named the tournament’s outstanding wrestler in three of them.

“We’ve had some great wrestlers in the program over the years, but have never had a kid with a run like that in the month of December,” Calentino said in an email.

Both Marshall and Meisinger are ranked in the top-10 in the state in their respective weight classes, according to Calentino.

Both wrestlers will make the trip to Fresno on Jan. 8 for the Doc Buchanan Invitational, an invite-only tournament that features some of the top wrestling talent on the West Coast.

The Triton wrestling team will continue league play on Jan. 12 with a road match against Laguna Hills.

In the championship game of the Tustin Classic, the San Clemente boys basketball team lost to Clovis West on a layup with just over two seconds left on the clock that sealed a 51-50 victory for the Golden Eagles.

Birmingham and Fotheringham were each named to the all-tournament team.

San Clemente (11-5) suffered a 66-63 overtime loss to Troy on Jan. 5 to close out its nonleague schedule. Senior guard Gage Shelmidine led San Clemente with 15 points but fouled out in the overtime period with just under three minutes to go. Waikle scored 12 points and Fotheringham scored 11. Fotheringham also secured 10 rebounds for his fourth double-double of the season.

The Tritons will open their run through South Coast League play on the road against Dana Hills (7-9) on Jan. 8. San Clemente is the defending league champion. The Dolphins will enter the game riding a two-game win streak.

After an opening round loss to Temecula Valley in the Excalibur Tournament on Dec. 28, the San Clemente girls soccer team rattled off consecutive wins to reach the finals of the tournament’s consolation bracket, where they lost to Tesoro 3-0. Tesoro’s Ally Cook scored all three goals for the Titans. San Clemente goalkeeper Lauren Brzykcy made 12 saves.

San Clemente (6-3-4) was set to open South Coast League play against Aliso Niguel on Jan. 7. Results were not available at press time. The Wolverines are the No. 2 team in the CIF-SS Division 1 rankings and the Tritons are ranked eighth. The Tritons will continue league play on Jan. 12 with a match against Capistrano Valley.

The San Clemente boys soccer team will open South Coast League play on the road against Capistrano Valley on Jan. 8. The Tritons (5-7-4) recently competed in the SoCal High School Classic Tournament, where the team went 1-2-1. San Clemente opened its tournament bid with a 3-0 win over South East and drew to a 0-0 tie with Santa Margarita on Dec. 28. San Clemente closed out the tournament with back-to-back losses to Santa Margarita and Huntington Beach on Dec. 29.

For the first time since early December, the San Clemente girls basketball team won consecutive games while competing in the OC Tournament of Champions.

The San Clemente girls water polo team, the second-ranked squad in the CIF-SS Division 2 rankings, picked up a big nonleague win over Los Alamitos on Dec. 30. The Tritons jumped out to an early lead against the Griffins, the No. 10 team in Division 1, and did not let up in an 8-6 victory.

The Tritons (7-3) were scheduled to open South Coast League play against El Toro on Jan. 7. Results were not available at press time. The Chargers are the No. 1 team in the CIF-SS Division 2 rankings.