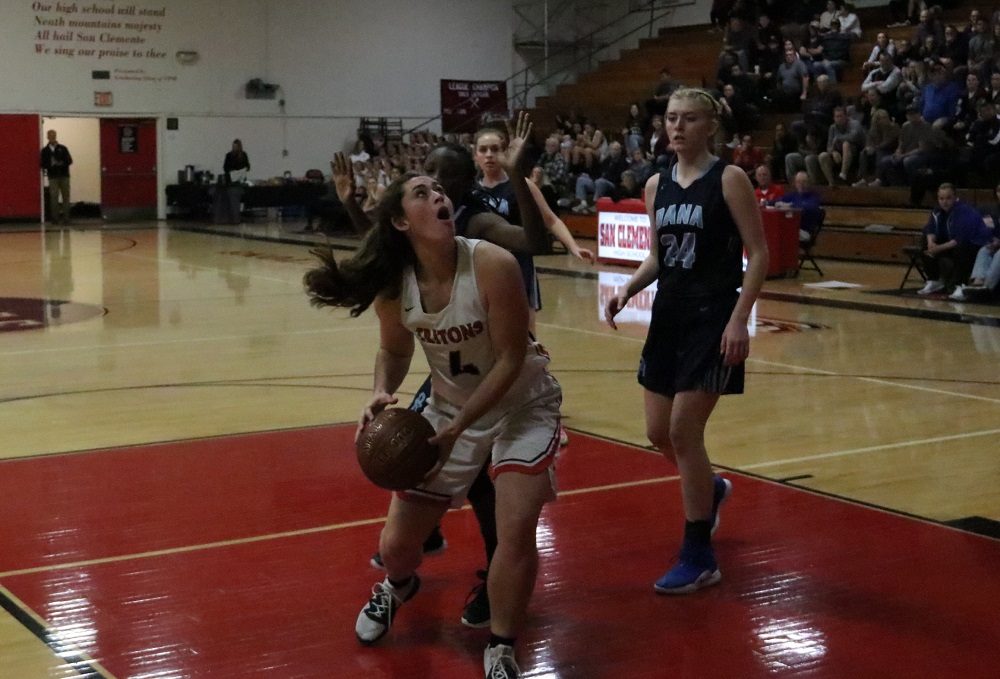 As the spring sports season begins, the winter sports playoffs rage on.

San Clemente entered the playoffs will all five of its winter sports teams competing, but only two remained as of press time on Wednesday, Feb. 19.

Let’s check in on the Triton playoff teams:

After the regular season ended, San Clemente girls basketball coach Kerri Husbands was slightly concerned the Tritons could be rusty by the time the playoffs began.

With the way the South Coast League schedule works, one team has a bye each league game day, while the other four teams play. After San Clemente (25-3) won its first league title since 2015 on Feb. 3, the Tritons’ bye came on the final game day of the regular season.

For its league title and strong regular season, San Clemente earned the No. 1 seed in Division 2A and a bye in the first round of the playoffs. This mean the Tritons would go 12 days between games.

When San Clemente finally hosted Culver City in the second round on Feb. 15, the worry of rust faded away as the Tritons were just as sharp as ever.

San Clemente played at Summit High School in Fontana on Wednesday, Feb. 19, but results were not available at press time. If the Tritons advanced, they would host Burroughs of Burbank or play at Whittier Christian in the semifinals on Saturday, Feb. 22.

San Clemente has not advanced to the CIF-SS semifinals since 2008. This season is Tritons’ second trip to the quarterfinals in three seasons, but the 2018 quarterfinal appearance was San Clemente’s first since that 2008 semifinal run.

The San Clemente girls water polo team reached the same threshold as it has the past three seasons.

The South Coast League champion Tritons (16-13) dominated Los Osos, 15-3, in their CIF-SS Division 2 opener on Feb. 12 at San Juan Hills High School and continued their run with a 12-8 win over Schurr on Feb. 15 at Vista Hermosa Sports Park.

No. 3 seed San Clemente took on No. 2 seed Agoura in the Division 2 semifinals on Wednesday, Feb. 19 at the William Woollett Jr. Aquatics Center in Irvine, but results were not available at press time.

If San Clemente advanced to its second straight CIF-SS Final, the Tritons would play the winner of Harvard-Westlake and Mira Costa at the Woollett Aquatics Center on Saturday, Feb. 22.

The San Clemente boys soccer team had played to its strengths in the CIF-SS Division 1 playoffs.

Defense had been at the forefront of the Tritons’ efforts all season.

San Clemente (21-2-3) scored its 19th shutout of the season in the first round, as the Tritons defeated Katella, 3-0, on Feb. 12. Jovanni Gomez, Nolan Grush and Niko Kaczmarczyk each scored goals, and goalkeeper Carter Fann recorded the clean sheet.

In the second round, No. 1 seed San Clemente added to its accolades with its 20th shutout of the season on the road at University. Even so, it proved the end of the road for the defending Division 1 and SoCal Regional champion Tritons.

San Clemente battled University through a scoreless regulation, two overtime periods and deep into a shootout, but the Trojans prevailed over the Tritons in the penalty-kick tiebreaker, 7-6, to knock out San Clemente and advance to the CIF-SS quarterfinals.

It was only the second loss of the season for San Clemente, with the first coming in a 1-0 decision to Division 1 No. 3 seed Palos Verdes earlier this season. In two losses this season, the Tritons only conceded one goal total.

According to season stats on MaxPreps, Fann earned a total of 10 shutouts, and Connor Stoll earned eight shutouts.

The San Clemente boys basketball team (17-13) battled its way to make the playoffs and battled in the first round of the Division 2A playoffs, but the Tritons did not advance in a 49-42 loss at Mira Costa on Feb. 12. San Clemente finished third in the South Coast League this season.

The San Clemente girls soccer team (12-6-4) was hit hard in the Division 1 first round, as the Tritons lost at Santiago of Corona, 4-0. Rylie McLeish made three saves for San Clemente. The Tritons finished third in the South Coast League this season.