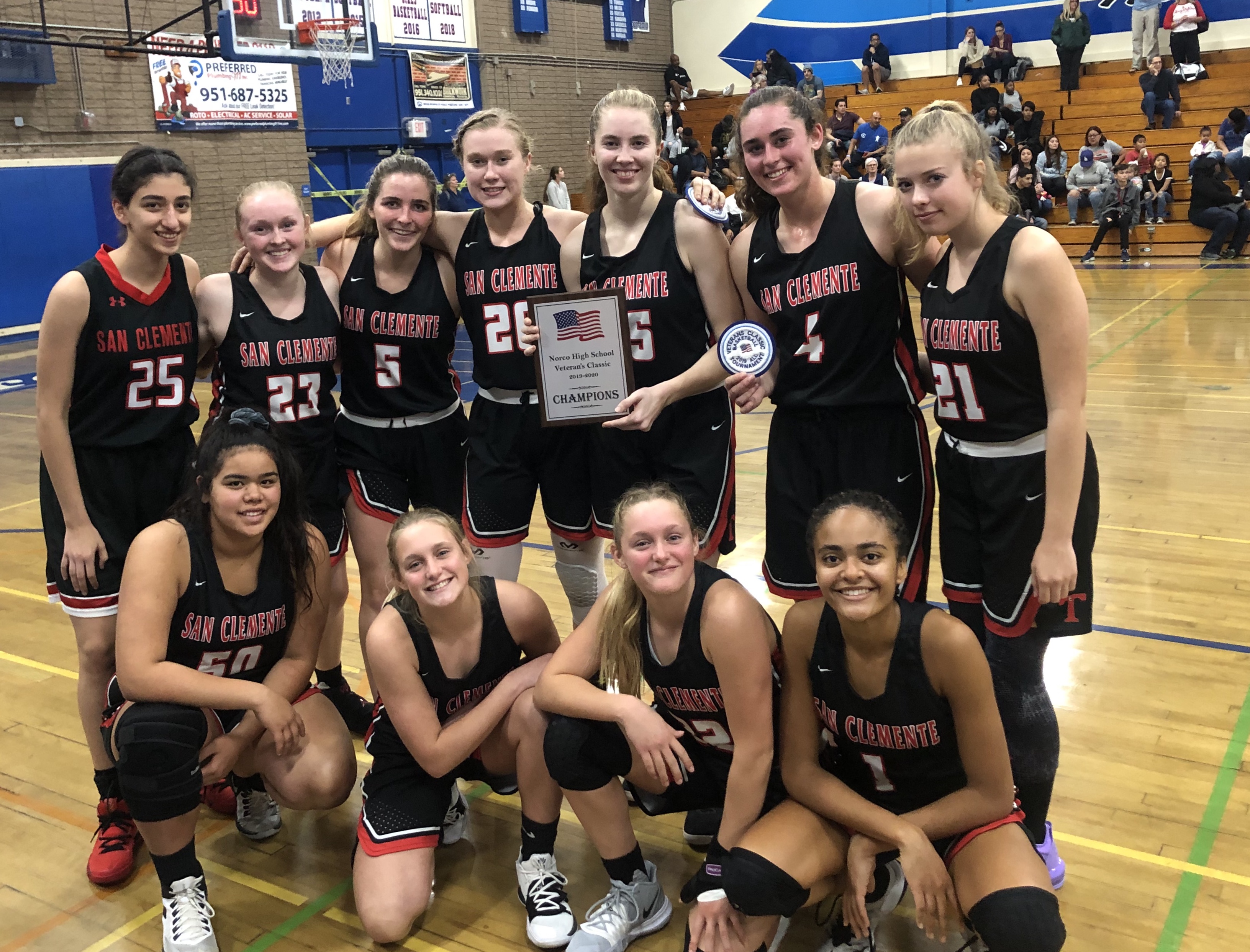 The San Clemente girls basketball team has stormed out of the gates to begin its 2019-20 season.

The Tritons have started a perfect 5-0 with a championship performance in the Norco Veteran’s Week Tip-Off Classic and a solid win on Alumni Night.

Senior Ella Gardiner and junior Jessie Blaine were major standouts for San Clemente in the Norco tournament. Gardiner, Blaine and sophomore Jolie Johnson were named to the all-tournament team.

Gardiner hit double figures in points in each game of the tournament, and Blaine led the Tritons in scoring against Chapparal and in the championship game over West Covina on Nov. 23.

Gardiner grabbed 18 rebounds in the championship game to surpass 1,000 rebounds in her San Clemente career.

San Clemente continued its streak on Nov. 26 with a win over Foothill, 62-48, on Alumni Night.

The Tritons next host Irvine at home on Friday, Dec. 6, before entering the Artesia Winter Classic next week starting on Monday, Dec. 9.

For more on the San Clemente girls basketball team and all Triton winter sports teams, check out our annual San Clemente Times Winter Sports Preview next week on Thursday, Dec. 12.

The San Clemente boys basketball team has won four games in a row, including an impressive showing at the Godinez Grizzly Invitational, to begin the 2019-20 season.

San Clemente dropped its opener at Oceanside, 70-64, on Nov. 20, but the Tritons have responded well in the four wins.

Six San Clemente players have hit double digits in scoring over the four games to showcase a varied team effort by the Tritons.

Junior Jack Carroll has led San Clemente in points twice, with 14 points in the Tritons’ first win of the season, 74-42 over Woodbridge on Nov. 22, and with 23 points in San Clemente’s last game, a 53-45 win over Northwood at Godinez on Tuesday, Dec. 3.

Senior Berk Harris led the Tritons with 18 points in a win over Portola, 60-58, on Nov. 26, and junior Tyler Nemeth led San Clemente with 15 points in a romp over Calvary Chapel, 78-31, to open the Godinez tournament on Monday, Dec. 2.

The Tritons are next in action against Tesoro in the Gary Raya SoCal Elite Tournament on Tuesday, Dec. 10 at Portola High School. Tesoro won the tournament last season.

San Clemente will continue in the tournament against Yorba Linda on Wednesday, Dec. 11 and Northwood on Friday, Dec. 13. Both games are at Northwood. Tournament concludes on Dec. 14 with bracket play at Portola.

San Clemente senior harrier Hana Catsimanes’ season is over, and not in the way most expected.

Catsimanes ran a time of 18:54 seconds on the 5,000-meter course, which was more than a full minute slower than the time she ran on the same course in October. Catsimanes posted a 17:48 at the Clovis Invitational and was coming off a time of 17:21 at the CIF-SS Division 1 Finals on Nov. 23.

Catsimanes finished 16th at last season’s state meet with a time of 18:07.

The race closes one of the most decorated cross country careers in San Clemente distance running, but the Wake Forest-bound Catsimanes will return in the spring for track season.

The Tritons girls soccer team kicked off with a 2-0 win at Capistrano Valley on Tuesday, Dec. 3. San Clemente hosts Edison on Thursday, Dec. 5 and El Dorado on Dec. 17.

The San Clemente boys soccer team, ranked No. 1 in CIF-SS Division 1, opened with a scoreless draw at Oceanside on Monday, Dec. 2. The Tritons hosted San Marcos on Wednesday, Dec. 4, but results were not available at press time. San Clemente plays at Dana Hills on Friday, Dec. 6.