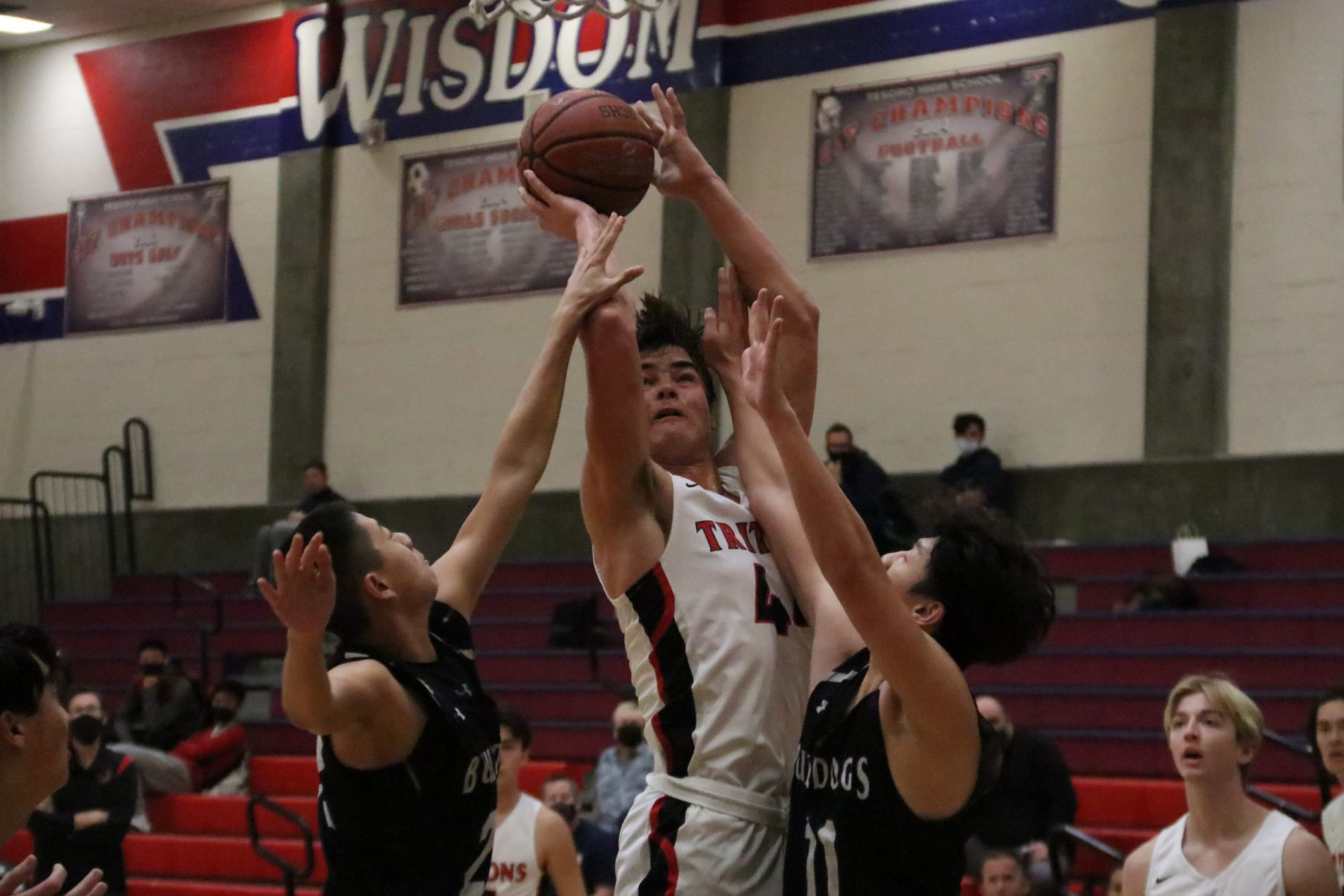 In the record books, the San Clemente boys basketball team looks to be in the right form with four straight wins as it looked toward its scheduled South Coast League opener at Trabuco Hills on Wednesday, Jan. 5.

However, when inspecting the details, the Tritons are in the midst of a recharge.

As San Clemente finished up its early-season tournament schedule at the Tustin Classic, the Tritons were playing strong with wins over Long Beach Millikan, 79-47, and Calvary Chapel, 59-55, to advance to the tournament’s semifinals.

Grace led in scoring against Calvary Chapel with 18 points, and Mehrens was right behind with 17 points. Spaeth scored 10 points.

Against Calvary Chapel, though, San Clemente was already down five players due to various illnesses and injuries—all non-COVID at time—but ahead of its semifinal game on Wednesday, Dec. 29, the Tritons pulled out of the tournament due to COVID-19 protocols.

So, despite its strong early-season play, 10-4 record and four consecutive wins after a three-game losing streak, San Clemente looked to bounce back against Trabuco Hills on Wednesday. Results were not available at press time. Trabuco Hills had also pulled out of the Tustin Classic before it began last week due to its own COVID-19 protocols.

San Clemente continues in league play at Mission Viejo on Friday, Jan. 7, and at Tesoro on Wednesday, Jan. 12.

After an unbeaten run to open its season, the San Clemente girls soccer team took its first blemishes in the Excalibur Tournament—a loss in penalty kicks after a 1-1 tie against Capistrano Valley on Dec. 28 and a 1-0 loss to Foothill later the same day.

As the page turns onto a new year, the Tritons got back to their form and opened league play on the right foot against a longtime rival.

It was the Tritons’ fourth shutout of the season, as their defense has been particularly strong. San Clemente (5-2-1, 1-0) has allowed only four goals in eight games. The Tritons are also unbeaten at home with a 4-0 record.

Aliso Niguel may be San Clemente’s most frequent league rival in girls soccer, but now the Tritons’ attention turns just up the road to defending league champion San Juan Hills.

The Stallions won the South Coast League for the first time last season and host San Clemente on Thursday, Jan. 6. The Tritons are next at home on Tuesday, Jan. 11, against Tesoro.

Like their girls counterparts, the San Clemente boys soccer team had an unbeaten nonleague season that was spoiled at the last minute.

At the SoCal Nike Classic in Oceanside, the Tritons had come up big with a 4-0 win over Long Beach Wilson on Dec. 28 and a 3-0 win over San Dieguito Academy on Dec. 29. But then all good things came to an end, and San Clemente dropped a 2-1 game to Torrey Pines for its first and only loss of the season.

San Clemente now circles back to league play, and the Tritons had plenty of reasons to regain focus on their South Coast League opener.

The Tritons were dominant with 13 of their 21 wrestlers earning medals, including three individual champions: Eden Hernandez (116 pounds), Dylan Tsouo (170 pounds) and Lily Mercado (235 pounds). San Clemente won the tournament title with 199 points over Roosevelt at 150 points.

San Clemente graduate Cole Fotheringham caught two passes for 19 yards for Utah in the Rose Bowl on Jan. 1, but the Utes were unable to hold off Ohio State’s second-half comeback in a 48-45 loss. Fotheringham announced in December he would declare for the NFL Draft following the Rose Bowl.