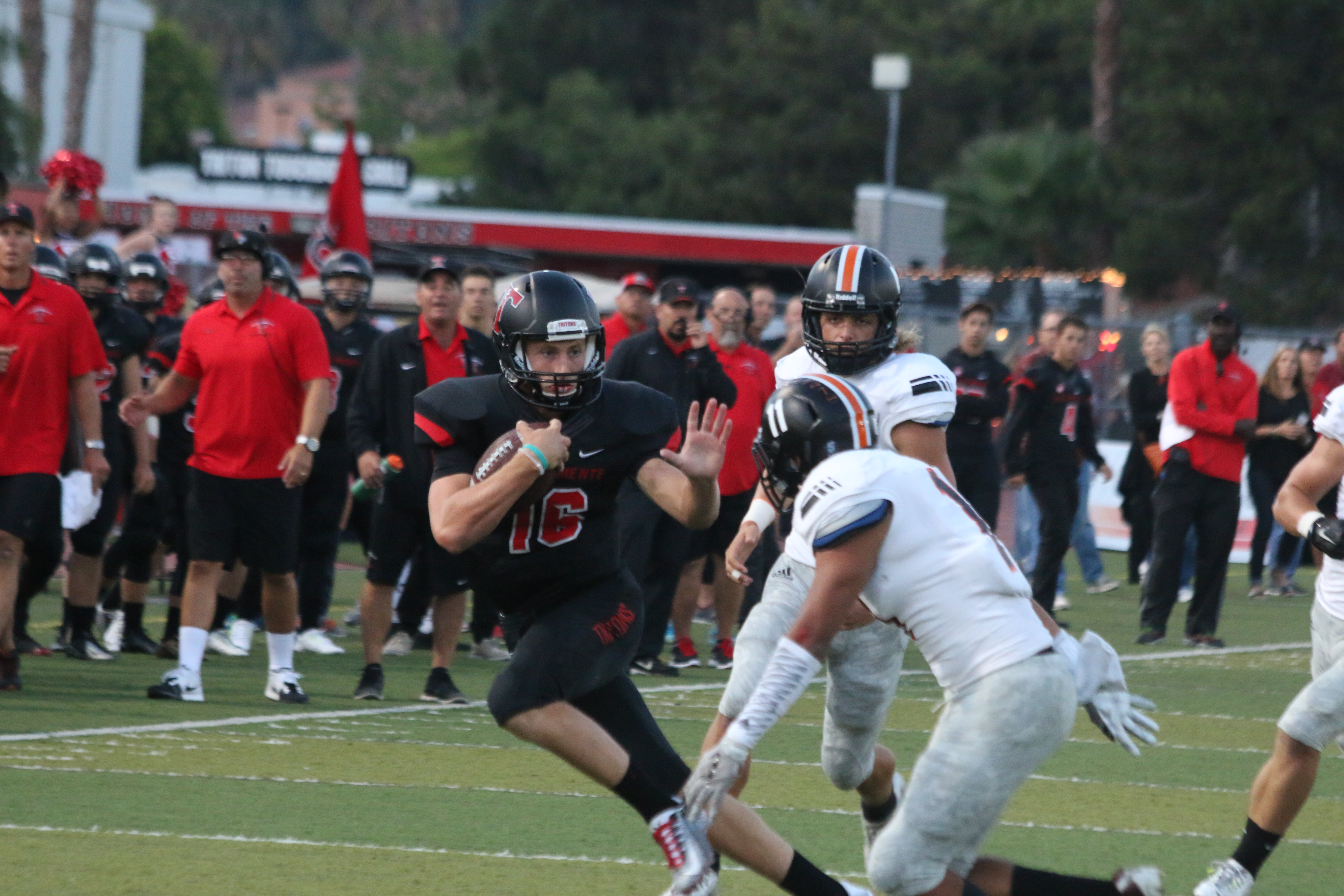 Facing a first-half deficit for the first time since Aug. 28, the San Clemente football team relied on its defense and playmakers to come roaring back against La Mirada on Sept. 19.

The Tritons outplayed the visiting Matadores in the second half, scoring 21 unanswered points and securing a 42-26 victory.

The Tritons opened up the third quarter with a bang, scoring on a nifty double pass play that featured a lateral from Jack Sears to Cole Fotheringham, who launched a deep ball to a wide-open Liam Eldridge for a 67-yard touchdown pass.

Mario Hernandez scored on a long touchdown run for La Mirada minutes later, giving his team a 26-21 advantage. The Tritons defense made sure the Matadores would not score again.

Sears threw his fourth and final touchdown pass of the night to Brandon Reaves, who took it 55 yards for the score.

A La Mirada high snap was sent sailing into the end zone on their next drive and the Tritons’ Austin Whitsett pounced on it for a touchdown and a 40-26 lead. Senior Vlad Dzhabiyev then sacked La Mirada quarterback Tristan Myer inside the Matadores’ 5-yard line, forcing a fumble that rolled out of the back of the end zone for a safety.

Both teams exchanged touchdowns in the opening half. Sears hit Fotheringham for a three-yard touchdown pass in the first quarter and, minutes later, Myer scored on a short keeper.

Matadores running back Sei-j Lauago churned out run after run in the first half and scored on a one-yard run to give La Mirada a 13-7 lead to start the second quarter. Lauago rushed for a season-high 151 yards on the night.

Eldridge caught a 23-yard touchdown pass from Sears midway through the second quarter. Eldridge reeled in three catches for a season-high 128 yards and two touchdowns. Sears completed 14 of 16 passes for 222 yards and four touchdowns.

Up next for the Tritons is a nonleague home game against Newport Harbor (2-1) on Sept. 25. The Sailors suffered their first loss of the season last week against Corona del Mar.

The San Clemente girls volleyball team recently ended a stretch of tournament play and now turns its attention to defending its South Coast League title. The Tritons (7-5) will open league play on the road against San Juan Hills on Oct. 1.

The Tritons will travel to play Corona del Mar for the second time this season on Sept. 24 before hosting El Toro on Sept. 28 in their final nonleague contest.

The first meeting between the San Clemente and Tesoro girls golf team this season was cancelled due to weather. As the clouds parted two days later, the two teams took to Bella Collina Golf Club on Sept. 17 and the Tritons emerged with a 203-227 victory.

Senior Isabella Seeburger earned match medal honors against the Titans after carding a 38 (+2) on the front nine.

The Tritons bested Dana Hills on Sept. 23 at the Dolphins home course at El Niguel Country Club. The Tritons earned a 210-215 victory and hold the early lead in the league standings.

The San Clemente girls cross country team placed seventh in the rated race at the Woodbridge Invitational on Sept. 19.

Marina McDonough posted the fastest time for the Tritons at The Great Park in Irvine, finishing the course in 18:46. Brooke Eisele (18:48) and Chandler Horton (18:50) rounded out the top group of San Clemente runners.

The Tritons will take the short trip over to Dana Hills High School to compete in the Dana Hills Invitational on Sept. 26.