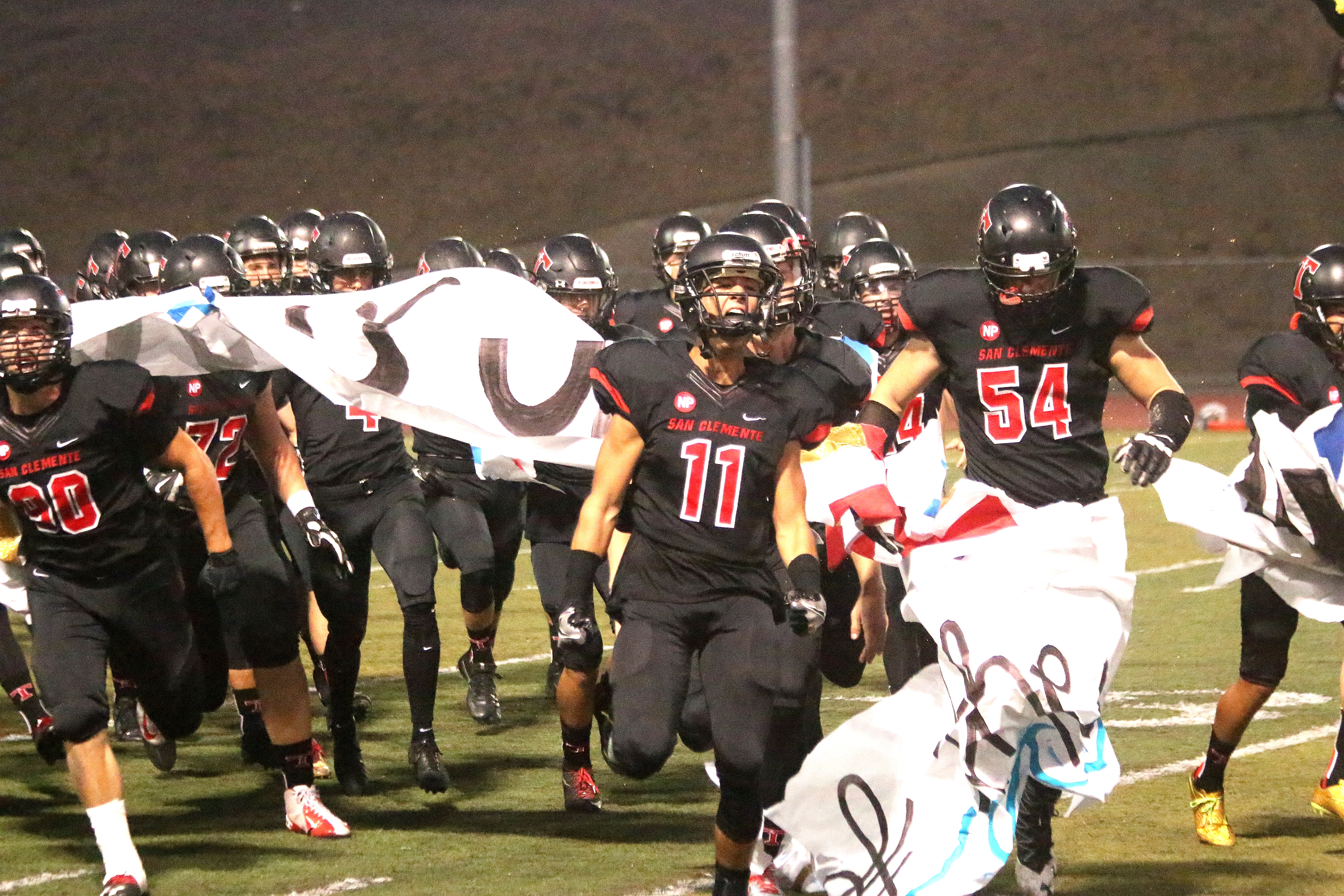 San Clemente football coach Jaime Ortiz likes to break each individual season down into three distinct phases. The first involves the nonleague portion of the schedule, during which the Tritons battled some local teams as well as some unfamiliar opponents. They went 4-2 overall. The second phase is league play, and the third, naturally, is the postseason.

The second phase of the Tritons season begins Friday night when they make their return to the South Coast League for the first time since 2013. The Tritons’ first league game will be on the road against Tesoro, and it will have big-time playoff implications.

The five-member South Coast League offers two automatic berths into the CIF-SS Championships. With undefeated Mission Viejo showing no signs of slowing down (the Diablos knocked off Tesoro 41-0 last week), the winner of this week’s game between San Clemente and the Titans will give one program an inside track to claiming the remaining playoff berth. San Juan Hills (6-1, 1-0) is also looming on the schedule.

“Every game in league will (have playoff implications) for us,” Ortiz said. “That’s the fun part of coaching. Tesoro is a good team, and they know how to win games. For us, it will be a good barometer to see where we’re at as a program.”

The Tritons were on a bye last week, and will enter the game against Tesoro well-rested.

The Tritons’ offense, led by standouts Jack Sears and Brandon Reaves, has grabbed a lot of headlines throughout the season. But the team’s defense has shown over the last two weeks that it deserves top billing as well.

The San Clemente defense has allowed just one touchdown over its last eight quarters of play, and recorded its first shutout of the season in a 64-0 victory over Rancho Buena Vista on Sept. 30. Senior safety Jason Graff had two interceptions against RBV and junior Branden Wilson had one, returning it 102 yards for a touchdown.

The Tritons defense will look to contain Tesoro’s top receiver, Shane Coleman, on Friday. Coleman has caught 31 passes for 495 yards and three touchdowns in six games. Aaron Angelos and Chase Petersen, transfers from Mission Viejo, have been platooning at quarterback.

Tesoro has played well in close games this season, and owns a 3-1 record in contests decided by seven points or less.

Socks for Heroes Drive: The San Clemente and Tesoro football programs are holding a Socks for Heroes sock-drive competition this week, and are asking for donations of black or brown cotton, athletic crew socks to be donated to military personnel deployed overseas.

The two programs are coming together to honor Donald Hogan, a Tesoro grad who died while serving as a Marine in Afghanistan. Hogan sacrificed himself to save his fellow Marines when the unit ran into an improvised explosive device while on patrol. Hogan was posthumously awarded the Navy Cross, the nation’s second-highest decoration for valor.

Those interested in donating socks can do so online at www.scmcsg.org/events/triton-titan-sock-drive, or drop off socks on-site at the game. San Clemente residents can also drop off socks at the SCHS campus’ front office.

Several runners stepped up for the San Clemente girls cross country team at the Sea View League preview race at Irvine Regional Park on Oct. 4. The Tritons, led by Chandler Horton, went 4-1 overall in the dual meet competition and are currently in second place.

Horton, who placed third, had a team-best time of 18 minutes at the three-mile course, while Marina McDonough (seventh), Amy Vollebregt (10th), Katelyn McNeal (12th) and Belle Sachse (16th) rounded out the top-5 for San Clemente.

Both Triton teams will compete in the sweeps race at the Orange County Championships at Irvine Regional Park on Oct. 15.

Tritons Golf in the Hunt for League Title

A big 207-221 victory over Tesoro on Oct. 10 kept the San Clemente girls golf team in the hunt to defend its South Coast League title. The Tritons were led by Erica Cornelius, who carded a 40 (+4) on the back nine at Tijeras Creek Golf Course.

San Clemente (7-5, 5-2) now sits in a two-way tie for second place in the league with Trabuco Hills (15-2, 5-2). The Mustangs and Tritons trail first-place Dana Hills (14-7, 6-2). The Dolphins closed out their league run with a two-match sweep over Tesoro and have no league games remaining.

San Clemente’s final league match will be against Tesoro on Oct. 13.

The San Clemente boys water polo team has kept it close against top-level league opponents so far this season, but have yet to pick up a win. Last week, the Tritons lost 10-9 to rival Dana Hills. On Oct. 11, the Tritons (8-7, 0-3) fell to ninth-ranked El Toro 11-8.

San Clemente will travel to play Villa Park on Oct. 14, and return to league play with a home game against Capistrano Valley on Oct. 18.

The San Clemente girls volleyball team will enter its final run through South Coast League play in need of some wins. The Tritons (5-17, 0-5) have lost nine in a row, but will get a chance to play one match against every league opponent one more time before the season ends.

San Clemente will travel to play Trabuco Hills on Oct. 13 and will host San Juan Hills, the defending league champion, on Oct. 19.