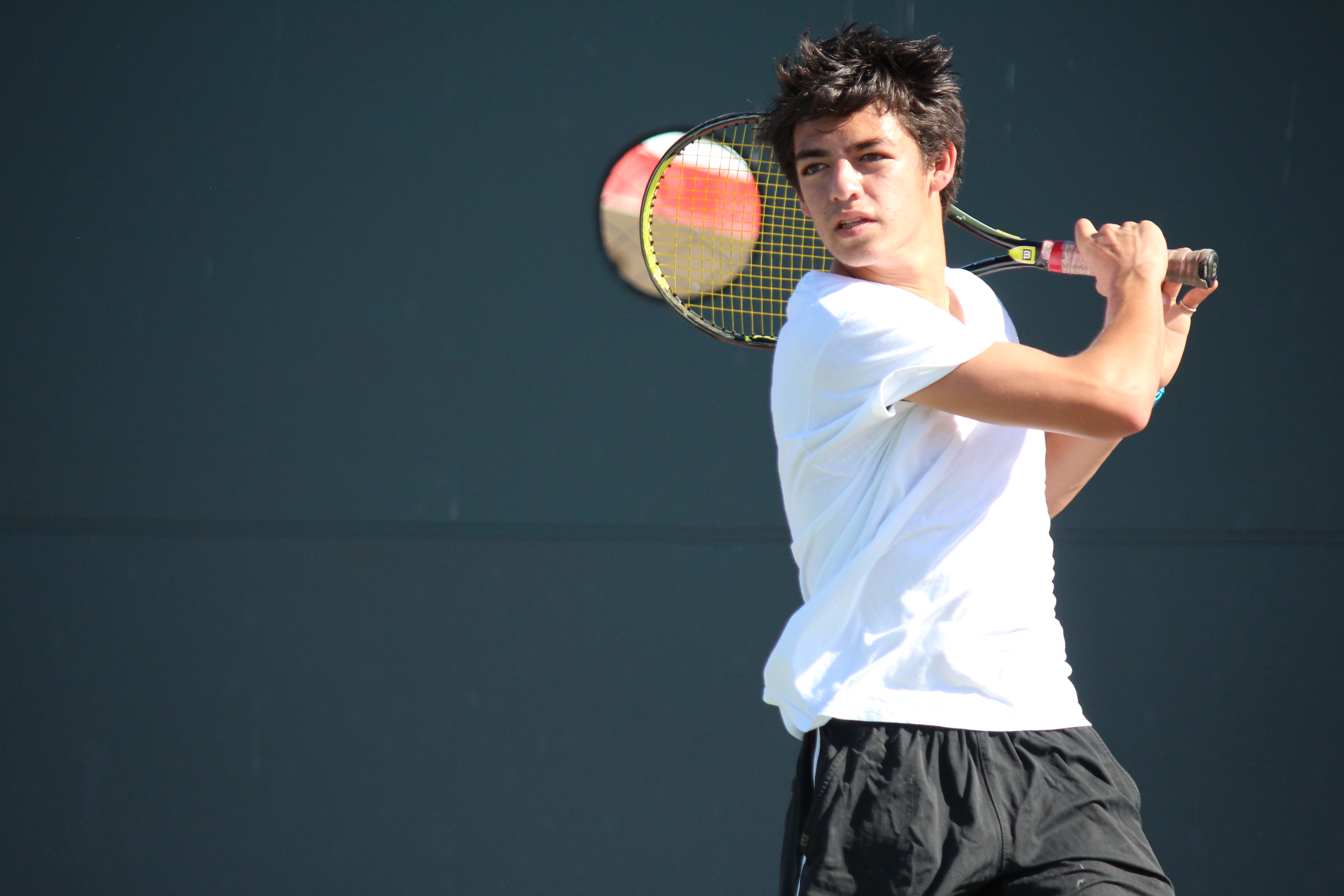 For in-game updates, news and more for all the San Clemente spring sports teams, follow us on Twitter @SouthOCsports.

When the season started, San Clemente boys tennis coach John Stephens was not sure how his team would fare in their attempt to win their fourth consecutive South Coast League championship. He knew they were heavy with talent at the top, in the form of four returning players, but the rest of the lineup needed to take shape quickly if they were to succeed.

Following a tough preseason schedule, the Tritons had no problem finding a groove in league play and on May 1, following a win over Capistrano Valley, they finished at a perfect 8-0 in league. It was the team’s fourth title in a row—a record for the tennis program—and the second consecutive year they went undefeated in league play.

“Bott ended up being as good as anybody we had. Our singles players were by far the strongest in league,” Stephens said.

Billy Whitaker and Matt Greenberg teamed up again as the top doubles duo and continued the success that defined their 2013 season. Whitaker and Greenberg finished 2014 undefeated in league play. The duo has not lost a league match in three years.

The team was set to face Mater Dei in the first round of the CIF-SS Division 1 Team Championships on May 14. Results were not available at press time. If they advance, San Clemente will face the winner of Westlake/St. Francis in the second round.

The Tritons singles rotation is strong, as is their No. 1 doubles unit, but Stephens and the team are still searching for players to round out the other two doubles teams.

The San Clemente boys volleyball overcame a slow start in their opening round match of the CIF-SS Division 1 Championships on May 13 to defeat Northwood in a 25-17, 25-20, 25-11 three-set sweep.

The Tritons will travel to play Orange Lutheran out of the Trinity League in the second round on May 15.

San Clemente (26-6) came into the playoffs after defeating Capistrano Valley on May 6 and finishing second at the Redondo Classic Tournament on May 3. The match against Northwood was the first time the Tritons took the court in a week, which made it hard to find an early footing, according to head coach Ken Goldstone.

Northwood lost a first-set lead but kept it close, trailing 15-12. A kill and a block by San Clemente’s Brandon Hopper was followed up by a kill and an ace from teammate Peter Van Liefde that put the set out of Northwood’s reach.

The Timberwolves held a four-point lead early in the second set and again, the Tritons came back. The play of junior middle blockers Matt August and Hopper ignited the rally. August recorded back-to-back kills and teamed up with Hopper for an emphatic block that flipped the set and gave San Clemente a 15-12 lead.

August and Hopper finished with five kills each. Hopper led the team with two blocks.

“They’re playing great. Really they’re such a solid part of what we do. Brandon took over the first game blocking and Matt got heated up on offense, which is a bonus. We rely on them to set our defense and they do a good job,” Goldstone said.

The Tritons emptied the bench and breezed their way to a third-set win.

After advancing to the semifinals of the US Lacrosse Southern Section Championships on May 10, the San Clemente boys lacrosse team came up against top-ranked Foothill in the postseason’s penultimate match and were defeated, 13-8.

The No. 4 seeded Tritons (16-5) trailed the Knights 6-1 early in the second quarter. A goal by Tritons senior Peyton Garrett with five minutes left in the half ended a 5-0 Foothill run to make it 6-2.

Foothill built a 9-2 lead in the third quarter and San Clemente began to make a comeback. Senior Austin Streeter scored twice and Jack Renard found the back of the net, narrowing the lead to four. San Clemente would come within striking distance in the fourth quarter following goals from Garrett and Renard, making it 11-7, but Foothill was able to hold on for the win.

Foothill was set to face JSerra Catholic in the championship match on May 14. Results were not available at press time.

In the second round against Santa Margarita, the Tritons got off to a quick start and held a 6-0 advantage heading into the second quarter. The teams traded goals late in the game but San Clemente’s lead was too much for the Eagles to overcome. Collin Zines (one goal, three assists), Garrett (two goals, two assists) and Renard (four goals) helped fuel the Tritons offense. Goalie Austin Boyer recorded eight saves.

Schwartz, Barriera Tee it Up at CIF Regionals

With a second- and third-place finish, respectively, at the Sea View League Finals, San Clemente junior Sammy Schwartz and sophomore Shane Barriera earned a berth in the CIF-SS Southern Individual Regional at Skylinks Golf Course on May 12.

Barreira carded an 83 (+11) at the 18-hole competition and Schwartz shot a 77 (+5). The cut line for the tournament, which determines the 20 golfers that will advance to the CIF-SS Individual Finals on May 27, stood at 77. Schwartz and 14 other players who finished on the cut line competed in a playoff but the Tritons junior was not able to advance.

As a team, the Tritons won the league title outright and will play in the CIF Divisional Championships at Talega Golf Club in San Clemente on May 19.

The San Clemente baseball team, which lost a chance at a co-league championship title after their May 9 loss to Dana Hills, needed a win May 13 against Aliso Niguel to stay in the hunt for second place.

The Tritons got a strong effort from starting pitcher Kolby Allard, but their bullpen was not able to close the door, allowing seven runs in the final inning in an eventual 7-6 loss.

Allard dominated the Wolverines batters through six innings of work, allowing only four batters to reach base on three hits and a walk while giving up no runs. Allard finished his day retiring ten straight batters from the third inning to the sixth.

The Tritons looked strong early, scoring a run in each of the first three innings. Carrying a 3-0 lead into the bottom of the fifth inning, the San Clemente bats knocked in three runs on five hits, including a double by Will Tribucher and a two-RBI single by Tyler Ankrom. Senior Kent Burckle (.455 batting average) continued his torrid season at the plate, smacking two doubles and drawing a walk in three at-bats.

Leading the Wolverines 6-0 heading to the final inning, the Tritons bullpen struggled to get batters out. Rhys Evans and Matt Garrison combined to allow five hits and five runs while recording only one out. With a 6-5 lead, Dylan Riddle came in and surrendered a two-run home run to Aliso Niguel’s Remy Wasserbach, giving the Wolverines a 7-6 lead, their first of the game

The Tritons failed to score in the bottom of the seventh inning, going down in order for the first time in the game.

San Clemente will finish off league play May 15 with a final game against the Wolverines.—Kevin Dahlgren

The San Clemente boys and girls track and field teams finished third and fifth, respectively, at the South Coast League finals on May 6.

Madison Chronister won the girls discus at the league finals and will throw in the CIF-SS Prelims.