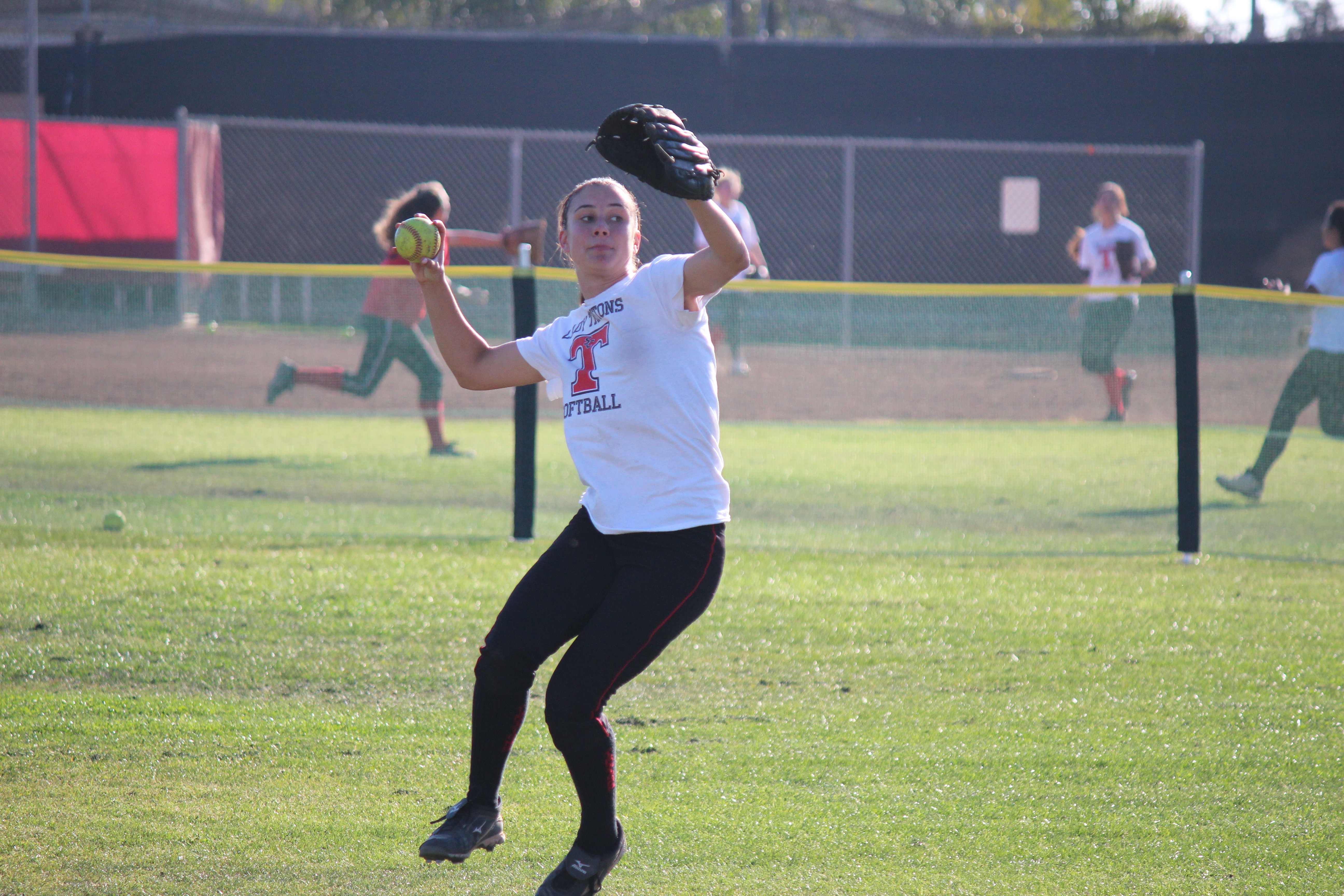 Softball Falls in First Round to Wolverines

In their return to the CIF-SS Division 2 Championships, the San Clemente softball team won a wild card game but lost in the first round to Aliso Niguel, 3-1, on May 20.

The Tritons (13-8, 3-5 league) pulled off a convincing 8-2 win over La Mirada on May 19 in the wild card round. The Tritons bats were hot in that game, scoring eight runs on nine hits.

In the first-round matchup against the Wolverines, the bats suddenly cooled off. San Clemente was held in check by Aliso Niguel starting pitcher Ashley Ruiz, who threw a complete game one-hitter.

The teams were tied 1-1 heading into the bottom of the third when Aliso Niguel plated two runs, which would ultimately decide the game. Tritons junior Lauren Kane had the only hit.

The loss capped off a turnaround season for the Tritons. The team won only five games in 2013 but came away with a winning record under the guidance of first-year head coach Bill Malcolm.

The San Clemente baseball team advanced through the wild card round of the CIF-SS Division 2 Championships on May 20 with a 2-1 win over Woodbridge. The Tritons were set to face Chino Hills May 21 on the road in the first round. Results were not available at press time.

Tritons senior pitcher John Sheaks stunned the Warrior batters through six innings, giving up one run on three hits, while striking out nine.

The Tritons offense started strong at the plate but ran into outs on the base paths in the first inning. Connor Sealey walked and stole second base but was thrown out on a close play at the plate on a single by Burckle. One batter later, Kent Burckle was tagged out trying to advance to third on a groundball to the shortstop.

Woodbridge starter Kai Abe helped his own cause and gave the Warriors a 1-0 in the bottom of the third inning with an RBI double.

The Warriors carried their lead to the top of the fifth inning until Dylan Riddle hit an RBI ground ball that made it 1-1.

With the game still tied 1-1 in the top of the seventh, Dylan Riddle worked a walk and advanced to third base. Burckle followed with a single, allowing Riddle to score.

“We haven’t played really well in the last three games, including this one. I thought we played better defensively today, but we need to start swinging the bats if we are going to go deep into the playoffs,” San Clemente head coach Dave Gellatly said. –Kevin Dahlgren

The San Clemente boys tennis team’s CIF-SS Division 1 Championship run ended in the second round on May 16 following a 12-6 loss to Westlake, the No. 1 team from the Marmonte league.

The Tritons advanced to the second round after defeating Mater Dei 14-4 in the first round.

San Clemente was forced to play sophomore Jay Yeam, who normally plays in the team’s top-3 singles rotation, in doubles. It was a move of necessity, according to head coach John Stephens, but it paid off as Yeam paired up with Kyle Darby and the duo wont two points.

Michael Bott was the only singles player who earned a point for the Tritons.

The doubles team of Billy Whitaker and Matt Greenberg swept their three matches. Greenberg and Whitaker will compete in the CIF-SS Individual doubles tournament. Bott will play in the singles format.

Rounds of 73 (+1) and 77 (+5) from Sammy Schwartz and Shane Barreira, respectively, were not enough to push the San Clemente boys golf team into the next round of team competition on May 19 at Talega Golf Course in San Clemente.

The Tritons shot a collective 406 at the CIF South Coast Team Divisional Championship, finishing in 11th place in the 19-team event.

The Tritons posted solid scores from all six team members, which include rounds of 84 (+12) from Reese Wahlin, two rounds of 86 (+14) from Ryan Moore and Sean Rawlings and an 88 (+16) from Austin Briggs.

Several San Clemente track and field athletes competed at the CIF-SS Division Prelims at Trabuco Hills High School on May 17. Following some standout performances, those athletes have qualified to compete in the CIF-SS Finals on May 24 at Cerritos College.

Junior Madison Chronister finished eighth in the discus throw and will advance. Chronister, who recorded a throw of 125-04, is only the second thrower from the girls program to advance to the finals since 1981.

Senior distance runner Melissa Eisele finished seventh and second in the 1,600 and 3,200-meter runs, respectively. Eisele qualified for the finals in both events, but will only compete in the 3,200 on May 24, according to head coach Dave Proodian.

Kelsey Benoit and Rocky Fenton both qualified in the shot put and discus throws. In the shot put, Benoit unleashed a second-place throw of 61-08. Fenton finished seventh.

Fenton posted the top throw in the discus at the qualifying event with a throw of 173-09. Benoit placed fourth (171-05).

Despite a first-place finish in the South Coast League, the San Clemente boys volleyball team found themselves on the road in the second round of the CIF-SS Division 1 Championships on May 15. The Tritons traveled to play Orange Lutheran, the third-place team out of the Trinity League, and lost 21-25, 25-21, 18-25, 22-25.

The Tritons earned a convincing three-set win over Northwood in the first round of the playoffs. When they took the court against the Lancers two days later, they had a multitude of unforced errors, according to head coach Ken Goldstone.

“I think our guys played hard but we made some ball control mistakes. We had some hitting and passing errors,” Goldstone said. “You don’t want to have those errors at this time of year.”

The loss caps off a season that saw the Tritons finish second in the Redondo Union Championships, third in the OC Championships and ninth in the gold division at the Best of the West Tournament. San Clemente also won the South Coast League title.

Shawn Stephens was named the South Coast League MVP following the end of the regular season. Nick Goldstone and Peter Van Liefde were named to the all-league first team. Brandon Hopper and Matt August were named to the second team.

The 2014 All-County and US Lacrosse Postseason awards were announced May 16.

Senior midfield Peyton Garrett was named a US Lacrosse All-American and named to the All-County first team. Garrett will play at Division 1 High Point University next fall.

Seniors Stone Sims (defense) and Austin Streeter were named to the All-County second team. Sims is committed to play for the University of Albany in New York and Streeter will play for Bellarmine University in Kentucky, both Division 1 programs.