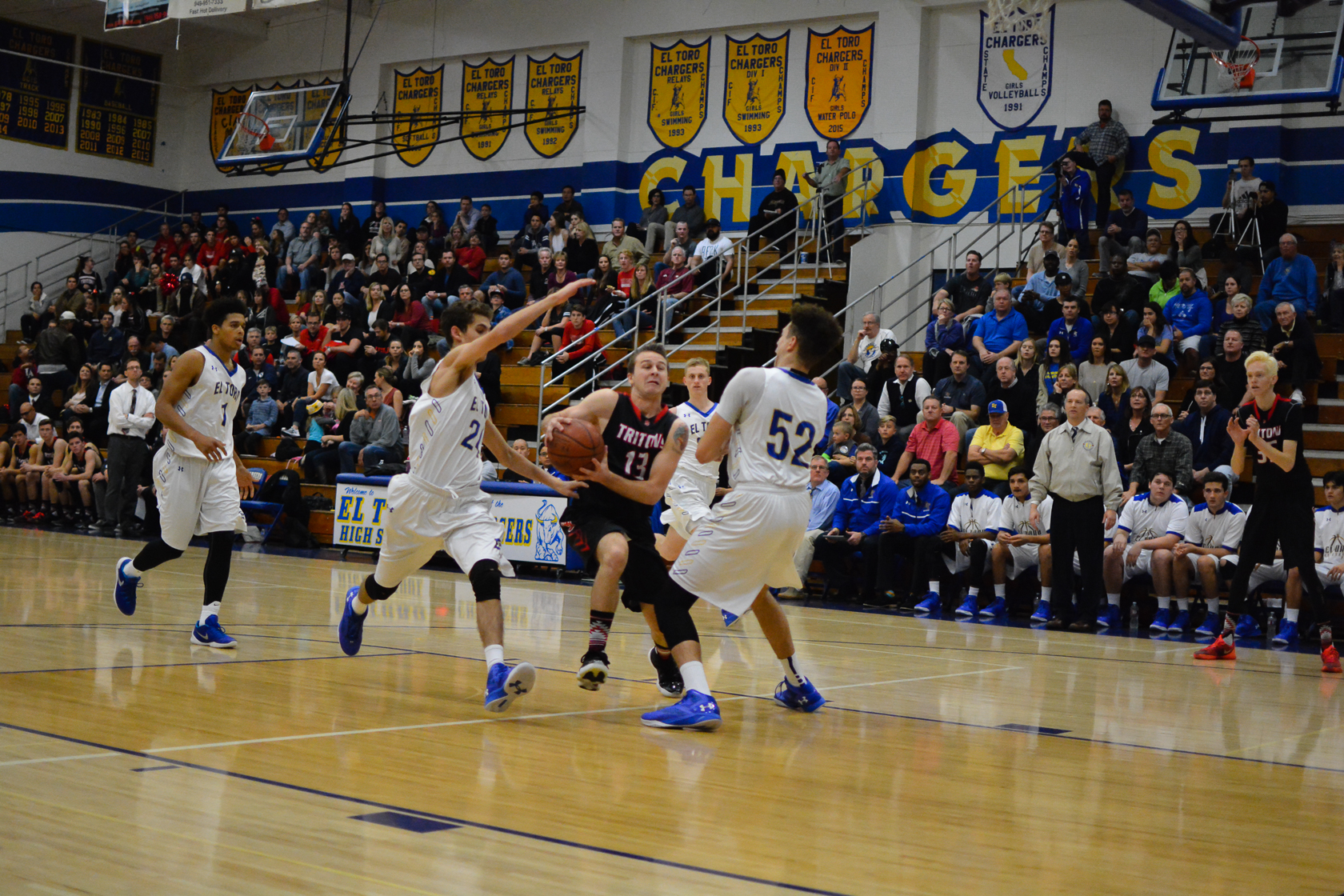 If the San Clemente boys basketball team is to wrap up its third consecutive league title this season, they will have to do it the hard way.

The Tritons (17-6, 5-1 league) suffered their first loss in league play, and first loss on their home court in league play in over a year, to El Toro on Feb. 3. Despite outscoring the Chargers 21-17 down the stretch in the fourth quarter, the Tritons could not make up ground.

San Clemente ensured itself a seventh straight trip to the CIF-SS Championships following a 74-56 victory over Mission Viejo on Jan. 29. It was the fifth win for the Tritons in league play, which guaranteed the team at least a third-place finish.

Senior guard Gage Shelmidine scored a game-high 23 points against Mission Viejo. Shelmidine knocked down four 3-pointers in the game and senior Dillon Waikle made five from beyond the arc on his way to scoring 20 points. Waikle also secured 10 rebounds in the win.

The San Clemente girls soccer team lost to visiting Aliso Niguel 2-0 on Jan. 28 in a match that could ultimately decide the South Coast League title.

San Clemente kept hold of its second-place standing following a 2-0 shutout of Capistrano Valley on the road on Feb. 2. Sophia Ellis and Kira Nemeth each scored goals for the Tritons in the win.

League title aspirations can change in the blink of an eye in the world of high school sports. For the San Clemente boys soccer team, that rang true on Feb. 3 when the Tritons travelled to play San Juan Hills.

San Clemente jumped out to an early 1-0 lead in the sixth minute on a goal by Ben Giacobello and held the match in their hands until the final minute of play. In stoppage time, San Juan Hills’ George Kennedy headed home an equalizing goal off a corner kick to pull the Stallions even with the Tritons 1-1 as time expired.

A win would have put San Clemente in the driver’s seat for the South Coast League title. Instead, they will have to scrap their way past Mission Viejo on Feb. 5 if they are to remain in the hunt. The Diablos improved to 3-1-1 in league play following a 2-0 win over Capistrano Valley on Feb. 3. Capo Valley fell to 3-3 in league play.

The Tritons picked up an important win over Capistrano Valley on Jan. 29. Senior Barrett Croft netted home a first-half goal that proved to be enough as the Tritons held on for a 1-0 victory.

Michael Saba assisted Croft on the goal against Capistrano Valley and the Tritons defense clamped down for what was, at the time, a second consecutive shutout of a league opponent.

A late flurry of goals pushed the El Toro girls water polo team past San Clemente 9-5 in a South Coast League matchup on Jan. 30. The win wrapped up the league title for El Toro and leaves the Tritons in line to take second place.

San Clemente trailed the Hawks 21-17 at the half and rebounded with a 27-point second-half performance. The Tritons defense held Laguna Hills to just four points in the fourth quarter.