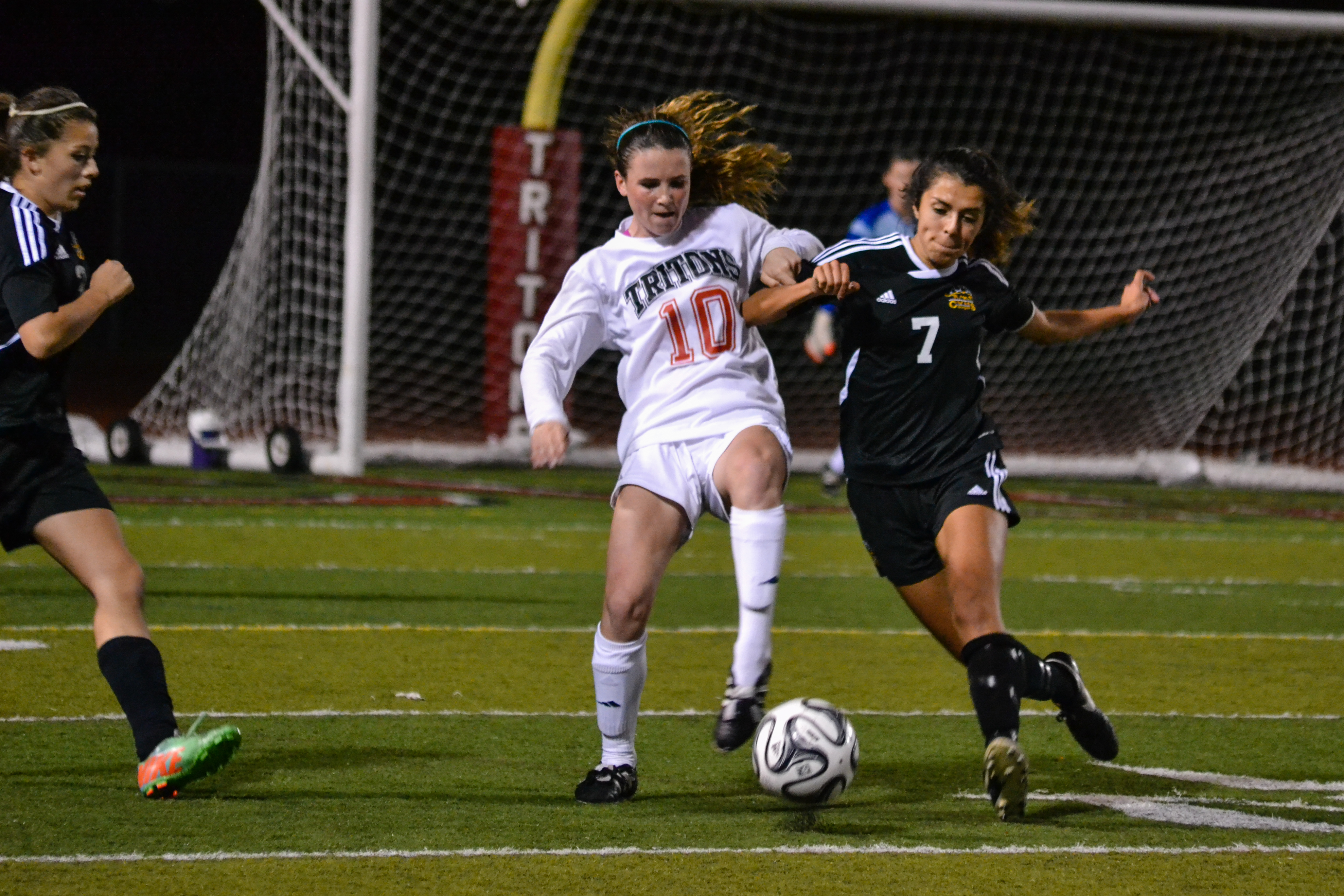 The San Clemente girls soccer team picked up an important South Coast League win on Jan. 13, defeating Capistrano Valley 1-0 at home. Sarah Rawle netted the lone Tritons goal in the first half to seal the win.

The win evened the Tritons (3-6-2) to 1-1 in league play. San Clemente opened league with a 2-0 loss to defending champion Aliso Niguel on Jan. 8.

Following a 4-4-2 start to their season, the San Clemente High School boys soccer team has settled into a groove in recent weeks. Since drawing to a 0-0 tie with Mater Dei on Dec. 27 as part of the Oceanside Classic Tournament, the Tritons have rattled off seven wins in a row, most recently picking up a 2-1 win over Capistrano Valley on Jan. 9.

The Tritons (11-4-2, 3-0 league) trailed the Cougars 1-0 at the half, but struck twice in the second half on goals from Nima Amjadi and Matias Ledesma to earn the come from behind win.

San Clemente will travel to play a league match against San Juan Hills on Jan. 16.

The San Clemente High School wrestling team is off to a 14-4 start to their season and had a successful run at the Esperanza tournament last weekend, where they had five place-winners.

It’s a good start, but the biggest match of their league season is on the horizon.

The Tritons will host defending league champion and perennial favorite Laguna Hills on Jan. 20. The Hawks and the Tritons have spent the last few years battling it out for the league title. The Tritons record in league is currently 1-2, with a lone win over Mission Viejo. The Tritons fell to Dana Hills and Trabuco Hills earlier this season, the first time a San Clemente team has lost more than one league match in 26 years, according to head coach Mark Calentino.

This weekend the Tritons will send a handful of their top wrestlers to the Temecula Invitational Jan. 16-17 before hosting the Hawks.

The Tritons, who are now 1-1 in South Coast League play, were led by Jenna Rodriguez’s 20 points and 16 rebounds. Senior Emma Bankson knocked down seven 3-pointers in the win.

A road game against first-place San Juan Hills on Jan. 22 now awaits the Tritons, who are looking for a third straight league title.

The San Clemente boys basketball team has benefitted from an influx of football players to their roster just in time for South Coast League play. The Tritons open league with a road game against Aliso Niguel tonight at 7 p.m.

Sam Darnold and Cole Fotheringham have been among the football players who have come back and contributed heavy minutes. Darnold was the difference in the Tritons (9-7) win over Troy on Jan. 6 when he poured in a season-high 29 points.

San Clemente wrapped up nonleague competition with a 65-55 victory over San Juan Hills on Jan. 9. Senior Nick Crankshaw sat out of the game against the Stallions in order to heal up before the team’s game against the Wolverines, according to the team’s website.

Aliso Niguel (12-5, 1-0) has had a strong start to their season. The Wolverines and San Clemente enter South Coast League play as the only two teams in league with a record above .500.

San Clemente led 4-1 after the first quarter, but El Toro responded by outscoring the Tritons 5-1 in the second. The Chargers had seven different players score goals in the win. Makenna Smith led the Tritons with three goals and two assists.

San Clemente was set to travel to play Aliso Niguel on Jan. 13. Results were not available at press time.

The CIF-SS All-CIF selections were announced Jan. 13 and the San Clemente High School football team was well represented. The Tritons had seven players named on the list, the most of any school in the Southwest Division.

Junior running back Vlad Dzhabiyev and junior offensive linemen Donte Harrington and Tucker Scott were named to the offensive team.

In other football news:

Whimpey, the Sea View League co-defensive player of the year, now has two offers, including one from Boise State University.