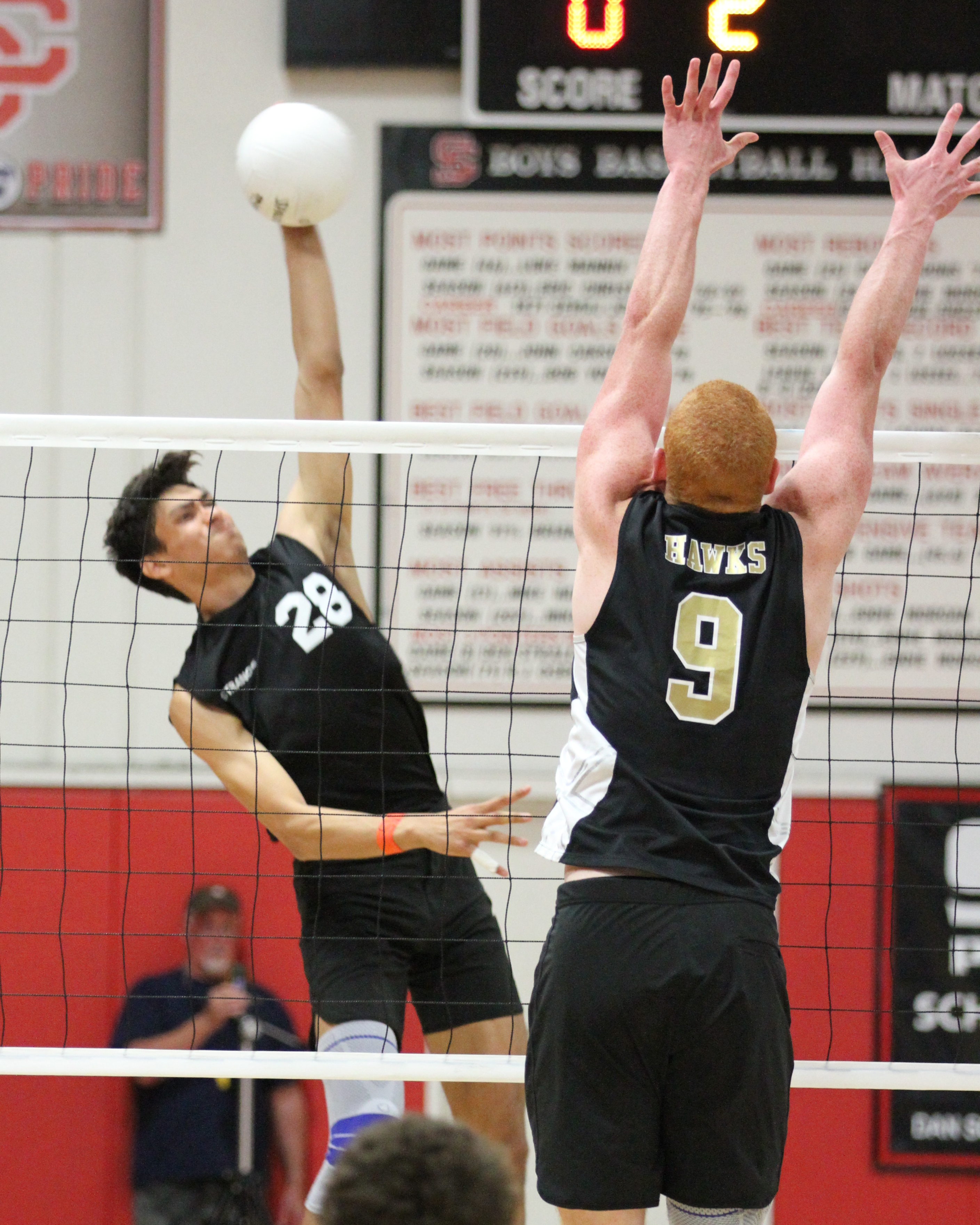 The color orange was ever-present during the San Clemente and Laguna Hills boys volleyball South Coast League match on April 15.

There were orange t-shirts, shoes, socks, wristbands and signs all over the San Clemente gym in honor of Saylor Voris, a San Clemente High School student who died early in the morning on April 14 after fighting leukemia for 19 months.

Both teams paid tribute by wearing orange, the color associated with the fight against leukemia. The Tritons wore orange wristbands while the Hawks wore orange bands around their legs. The crowd, especially the student section, was decked out in orange clothing.

San Clemente senior middle blocker Matt August said it was tough to go out and play after losing a friend but the Tritons responded, sweeping away the Hawks in three sets, 25-19, 25-23, 25-22.

San Clemente (14-3, 2-1 league) built late leads in both the first and second sets against the Hawks, who were playing without their starting setter.

Following an 18-5 run in the first, the Tritons held a 21-8 lead and San Clemente head coach Ken Goldstone emptied his bench. The Hawks immediately went on a 7-0 run and eventually narrowed the winning gap to six points.

The second set was much closer and at 22-21, the Tritons bench was emptied again and three sophomores took the court while most of the starting lineup sat on the sidelines. San Clemente sophomore outside hitter Jess Hunt notched the final two kills of the set to end the Hawks’ threat.

“I wanted to play some close games. If (Laguna Hills) caught up I wasn’t going to put our starters back in,” Goldstone said. “These guys need to learn how to win. I had three sophomores out there in game two. They’re good volleyball players, they’re capable.”

Among the more noticeable tributes to Voris was on August’s shoes. The senior, who led the team with eight kills, had “Pray for Say” and her initials, “SV”, marked across his sneakers, a sign that when he takes the court this year, Voris’ memory does as well.

“We did it for her … It especially hurt … it hit me hard,” August said. “I did it for her and I’m glad we got the win tonight. Not only tonight but for the rest of the season and forever she’ll be our inspiration.”

After a 1-3 effort at the Boras Classic tournament, the San Clemente baseball team will return to more familiar surroundings starting April 15. The Tritons were slated to return to Sea View League play April 15 and April 17 for games against third-place Trabuco Hills.

The Tritons (15-4, 3-1) went 1-3 at the high-profile Boras Classic at JSerra Catholic last week but the games were all closely contested.

San Clemente opened with a 3-1 win over Chatsworth, then lost the next three games, two of which were decided in extra innings. The game which did not feature extra innings for the Tritons was a 2-1 loss to Great Oak of Temecula.

San Clemente opened league play earlier this year with a 6-1 win over Trabuco Hills (13-6-1, 2-2). The Mustangs entered the series on a six-game winning streak.

Solid play in net made goals difficult to come by in the San Clemente and Tesoro boys lacrosse South Coast League game on April 14. The Tritons’ net-minder Austin Boyer proved to be sharper than his counterpart, however, as San Clemente won, 7-4.

Kieran Regan scored the lone goal in the first quarter, which gave the Tritons a 1-0 lead.

Both teams exchanged goals in the second and the Tritons led 3-2 at the half.

San Clemente scored three consecutive goals to open up the third. Branden Wilson scored once and Matt Keany scored twice to give the visitors a 6-2 advantage, which would not be threatened the rest of the way.

The Tritons will travel to play Trabuco Hills on April 17 for a crucial league matchup.

The San Clemente girls lacrosse team shook off early season troubles in league by defeating Tesoro 10-9 at home on April 14. The Tritons (6-4, 1-3) entered the match following a close 6-5 loss to league opponent Capistrano Valley on April 3.

The Tritons will host Trabuco Hills on April 17.

Tritons track and field team members Kelsey and Katie Carroll both had successful days at the Irvine Distance Invitational on April 11.

In one of their final nonleague contests before returning to South Coast League play, the San Clemente boys golf team again put up a solid winning number in a 193-224 victory over San Juan Hills on April 14.

San Clemente (6-3) will play one more match against the Stallions and in the Estancia Tournament before returning to league play against Tesoro on April 21.