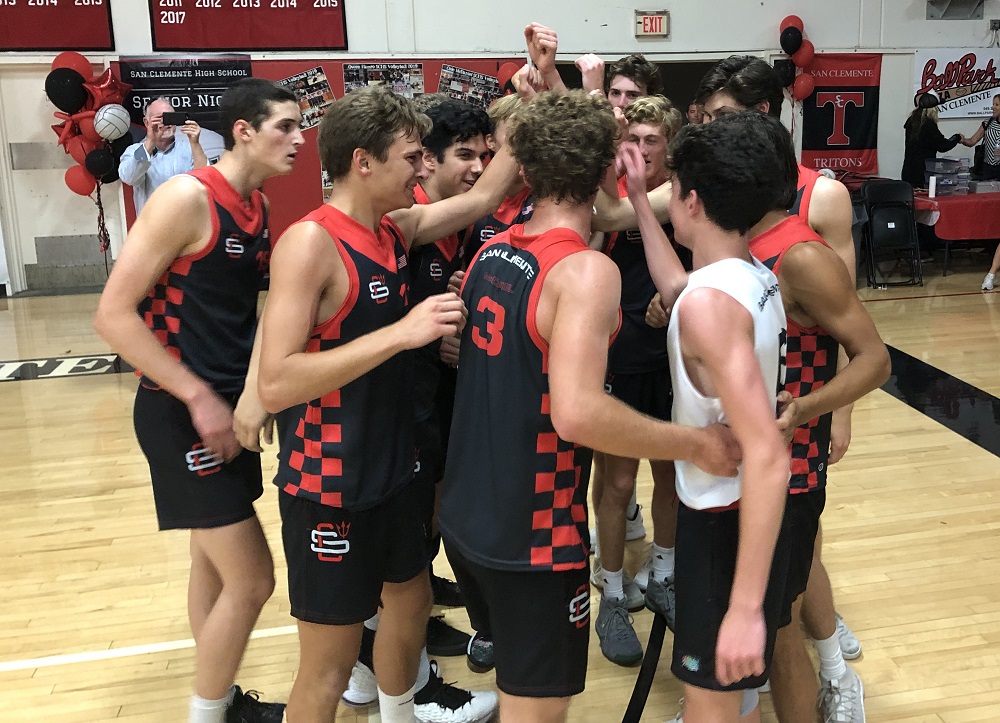 Games on Thursday, April 24 and track and field league finals on Friday, April 25 mark the end of the 2018-19 high school sports regular season, with the CIF-SS playoffs beginning next week.

Several San Clemente teams were involved in league title races with results ranging from impressive to surprising. Let’s check in on the Tritons as the regular season comes to a close.

The South Coast League title came down to the final league contest for San Clemente and Tesoro.

San Clemente and Tesoro had each torn through league play, with San Clemente’s lone blemish a five-set loss to Tesoro on March 19.

The Tritons welcomed the Titans into the San Clemente gym for the rematch on Thursday, April 18, expecting another knock-down, drag-out battle to the brink. This time, however, San Clemente was more than up to the task.

The Tritons breezed through the first set, 25-21, and overcame Tesoro challenges in the second and third sets, 25-22 and 25-23, to earn the sweep and secure a share of the South Coast League championship.

“Our goal was to win league,” San Clemente coach Ken Goldstone said. “Ever since we had our first class in the fall, that’s what we’ve been talking about. It’s really good for the guys to get the win. We didn’t want to let them (Tesoro) get back into it.”

The title is San Clemente’s second league title in three seasons, the other coming in 2017.

San Clemente could have taken the outright title if Tesoro had lost their league finale at Aliso Niguel on Tuesday, April 23. The last-place Wolverines almost pulled off the major upset to help out the Tritons by pushing to match to five sets and the fifth set beyond the normal 15 points. Tesoro beat Aliso Niguel, 25-19, 18-25, 25-19, 26-24, 23-21, to claim its half of the league title.

San Clemente wrapped up its season by going 5-1 at the Redondo Classic on Friday, April 19 and Saturday, April 20.

In the last CIF-SS Division 1/2 combined poll on April 15, Tesoro was No. 8 and San Clemente was No. 9. The league results won’t be factored in until the final poll and the release of the CIF-SS brackets on Friday, April 26.

Whether it’s San Clemente or Tesoro, the No. 8 team will be slotted as the final team in the Division 1 playoffs, with the No. 9 team taking the No. 1 seed in Division 2.

FINAL: San Clemente def. Tesoro, 25-21, 25-22, 25-23, and captures at least a share of the South Coast League championship. Beeuwsaert and Monier each with 14 kills for @SCHSTritons. @ocboysvolley @SCTimesNews pic.twitter.com/BmlTHLQKKg

The San Clemente and Tesoro softball teams were tied atop the Sea View League standings on the final game day of the season, Wednesday, April 24.

San Clemente played at El Toro, and Tesoro hosted Trabuco Hills. The results were not available at press time. If both teams earned the same result, they would split the Sea View League title.

CIF-SS softball brackets will be released on Monday, April 29, with wild-card games contested on Tuesday, April 30 and the first round on May 2.

The run of dominance continues for the San Clemente boys tennis team.

The CIF-SS brackets will be released on Monday, April 29.

When San Clemente and Trabuco Hills first met on March 26 at SCHS, it wasn’t pretty for the Tritons. The Mustangs thoroughly controlled the possession and ran away with a 13-7 win.

Trabuco Hills has been the better team all season, while San Clemente has struggled with injuries and tough results.

However, none of that mattered in each team’s penultimate league game on Monday, April 22.

San Clemente went to Trabuco Hills and upset the Mustangs, 9-6, to tie for the top spot in the South Coast League standings and a likely share of the league title.